It has been far too long since I read some Cather - before I started this blog, actually. My Antonia was thoroughly enjoyable, so I really should have gone back and read another of her books. Too many things to read, too little time.

O Pioneers was Cather’s first real hit. She had written a few short stories, mostly about “bohemian” young people in the city. She didn’t really find her voice until she went back to her roots and wrote about her immigrant pioneer ancestors and the communities she grew up in. The genesis of O Pioneers was a set of three short stories, which were eventually blended into a single narrative to make the book. In some places, the seams still show just a little, and having read My Antonia, I think that this book shows some signs of being a first novel. That is not to say it is bad, just that it isn’t as polished as her later books. 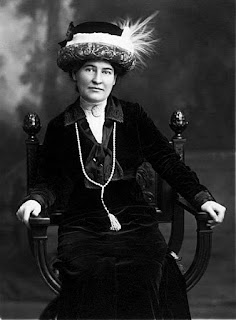 As soon as I started it, I realized that I had read the first chapter back in high school as part of American Literature. (Along with a chapter from So Big by Edna Ferber.) It is that iconic scene with Emil and his cat, and his first introduction to Marie, which will turn out to be all too fateful.

The true hero of the book is Alexandra, the big sister who is competent, visionary, and has a deep love for the land. Soon after this opening scene, their father dies, and the kids (well, Alexandra is in her 20s) and mom are left to fend for themselves. As drought forces other neighbors to leave, she sees the potential and scrapes together enough to buy several other farms. When the story resumes later, we find that she has prospered. Two of her brothers are not thrilled with this, even though they too have gained from her efforts. Emil, in the meantime, is in love with Marie - who is unhappily married to another man.

Alexandra remains alone as she grows older. She has a thing for Carl Lindstrom, who left with his family years ago. When he returns for a visit, they have chemistry, but he has nothing financial to offer her. This freaks out the brothers, who think that “the land should stay in the family.” Meaning they should get it rather than Carl. Because a married woman doesn’t count as a person, obviously.

Oscar spoke up solemnly, “The property of a family really belongs to the men of the family, no matter about the title. If anything goes wrong, it’s the men that are held responsible.”

The utter disrespect Oscar and Lou have for their sister is astounding. They bring up that she didn’t do the level of fieldwork they did - as if she just sat around. She certainly did not, any more than my farming pioneer ancestors did. If anything, she probably outworked them. It is clear enough that she was the real brains behind the success anyway, and that seems to rankle their egos.

The book ends with both a tragedy and a positive ending. In essence, the circumstances of the land and of love affect different characters in unique ways. Some, like Alexandra, thrive in the task of taming and working the land. Others, like her brothers, succeed, but do not thrive in any true sense. Others, like the violent and morose Frank Shabata, become embittered by both the land and love.

Still others, like the eccentric Ivar, who understands the land instinctively, and protects the wild birds which visit his farm, exist as part of the land as much as anything.

It’s not original with me, but I agree that Cather uses groups of three throughout the book, reflecting the three threads of the story. In particular, there are three types of love and lovers. Emil and Marie have a destructive passion that cannot last, but only destroys. Two of the farmhands have a love that is full of possessiveness and fear - it is based on roles and patriarchy, not mutuality. Finally, there is the love of Carl and Alexandra, that lasts in the face of difficult circumstances. I particularly enjoyed the way this love story was written. Despite their feelings, circumstances keep them apart until Alexandra is nearly 50. Yes, you read that right. A middle aged romance where the author assumes that passion is as genuine as it is for younger people. But it is also counter to expectations. Alexandra is a bit older than Carl, and she is far wealthier. Carl isn’t a gold digger by any measure, however. Their mutual love and respect for each other is delightful.

In contrast is the toxic marriage of Frank and Marie. He had a woman who loved him, and he completely poisoned the relationship. By the time the narrative introduces him, he is a jealous, controlling wreck. An extended quote is fantastic:

Frank's case was all the more painful because he had no one in particular to fix his jealousy upon. Sometimes he could have thanked the man who would bring him evidence against his wife. He had discharged a good farm-boy, Jan Smirka, because he thought Marie was fond of him; but she had not seemed to miss Jan when he was gone, and she had been just as kind to the next boy. The farm-hands would always do anything for Marie; Frank couldn't find one so surly that he would not make an effort to please her. At the bottom of his heart Frank knew well enough that if he could once give up his grudge, his wife would come back to him. But he could never in the world do that. The grudge was fundamental. Perhaps he could not have given it up if he had tried. Perhaps he got more satisfaction out of feeling himself abused than he would have got out of being loved. If he could once have made Marie thoroughly unhappy, he might have relented and raised her from the dust. But she had never humbled herself. In the first days of their love she had been his slave; she had admired him abandonedly. But the moment he began to bully her and to be unjust, she began to draw away; at first in tearful amazement, then in quiet, unspoken disgust. The distance between them had widened and hardened. It no longer contracted and brought them suddenly together. The spark of her life went somewhere else, and he was always watching to surprise it. He knew that somewhere she must get a feeling to live upon, for she was not a woman who could live without loving. He wanted to prove to himself the wrong he felt. What did she hide in her heart? Where did it go? Even Frank had his churlish delicacies; he never reminded her of how much she had once loved him. For that Marie was grateful to him.

While Marie bears some blame for cheating, Frank destroyed the marriage long before. In our own time, she likely would have left him years ago - they had no children, so why not? But back in the 1800s, this wasn’t an option for her.

Speaking of the past, this book is to a degree about my past. My family’s past. The Bergesons - Alexandra and family - are part of the same great migration that my own family participated in. They are Swedish, like my paternal grandfather and his family, and came to the Great Plains to farm under the Homestead Act. The branches of my family settled in Montana and Kansas - the story is set in between, in Nebraska.

There, like in the book, there were multiple communities within the greater community. The Swedes. The French. The Germans (again, my ancestors). The Czechs. What is particularly enlightening about the stories in this book is that they accurately reflect the immigrant experience. A common complaint by xenophobes today is that “the new immigrants aren’t assimilating.” But this charge was leveled at past immigrants too - particularly the Irish, but also the Swedes, and the Germans, and….

But guess what? Things were about the same back then. As Cather tells it, the first generation didn’t learn English. Their native languages were spoken at home, church, and at stores owned by the same language groups. The second generation (Emil and Alexandra, for example) was bilingual, speaking Swedish at home, and English at school and everywhere else. By the third generation, Swedish was largely forgotten.

That is exactly how it was with my ancestors. My great-great grandparents spoke Swedish or German, respectively, and never really learned English. My great-grandparents (one of which I got to know a little) could still speak a bit of the “old country,” while my grandparents had completely forgotten what little they once knew. Thus it is with today’s immigrants. The real “assimilation” issue is that immigrants from Latin America or Africa can’t just blend in with the whites like my ancestors eventually did with the other European Americans. Even the Irish were eventually accepted as “white,” rather than “white n----rs” as they used to be called.

I found this book to be thoroughly enjoyable. I really do need to read more Cather. I like her gentle perspective, and keen perception of human nature. This book is a good place to start, but definitely read My Antonia as well.

Posted by Diary of an Autodidact at 8:15 PM