The Light Fantastic by Terry Pratchett

Source of book: Audiobook borrowed from my brother.

Earlier this year, we listened to the very first Discworld book, The Colour of Magic, which my sons in particular loved, and had read themselves before we listened to it. We got our start on Terry Pratchett with his early novel, The Carpet People, which is not part of the Discworld universe, although it could be. From there, we listened to Dodger, about Victorian England, before finally making our acquaintance with Discworld through the first three Tiffany Aching books. (The Wee Free Men, A Hat Full of Sky, and Wintersmith.) Somewhere in there, we also listened to some short stories collected as Dragons at Crumbling Castle. (I am in denial about the abridged edition of Guards! Guards!) 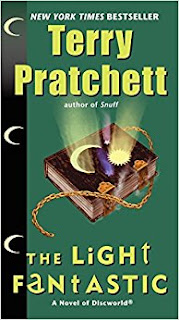 Anyway, The Light Fantastic is the second Discworld book written, and the direct sequel to The Colour of Magic. In fact, one might well consider it to be part of the same story, as the first book ends with a literal cliffhanger.

Incompetent wizard Rincewind has just joined tourist from hell Two Flower and his sapient chest The Luggage in tumbling off the edge of the disk toward oblivion. This is a cosmic problem, however, because inside Rincewind’s head is one of the eight great magic spells from the Octavo. This magic book takes the liberty of rewriting reality in order to save Rincewind - and thus itself.

Meanwhile, a red star has appeared in the sky, headed apparently right for the Discworld. The world’s greatest wizards decide that the eight spells from the Octavo need to be said in order to save the world from certain destruction. Thus, they need to find Rincewind. The Octavo does not particularly want Rincewind to be found, at least until the proper time. As Rincewind eventually learns from the spell squatting in his mind, he was chosen because he has an incredible ability to sense danger and run away, thus preserving himself.

Rincewind and Two Flower (and the Luggage, of course) end up in a magic forest with a gingerbread house, catch a ride on a flying rock piloted by a druid, and end up disrupting a virgin sacrifice at a Stonehenge analogue. They are saved by Cohen the Barbarian, one of Pratchett’s best creations.

Cohen is meant to be a parody of Conan, naturally, much like Hrun in The Colour of Magic. However, while Hrun is a straight up barbarian, Cohen is, well, old. He has forgotten whether he is 90 or 95, has no teeth, has constant aches in the back and other ailments of age. His long white beard comes down to his loincloth.

But he is no weakling. He didn’t live to be his age while saving maidens in distress, looting temples, and starting fights by being weak. No sir, he can still best just about anyone - particularly those who underestimate him. Well, as long as his back doesn’t lock up…

So anyway, Cohen rescues this virgin sacrifice, Bethan, who falls in love with him, because he is irresistible to nubile maidens. (This is why he has dozens of children.) Bethan, though, is special, because she can give amazing massages, allowing Cohen’s back to cooperate with him.

In any case, Cohen is quite funny, a very Pratchett sort of character.

Rincewind’s troubles aren’t over, however. Two Flower manages to get poisoned, and Rincewind has to follow him to Death’s domain and bring him back. This is complicated by Death’s adopted daughter, Ysabell, who has been lonely for company and would rather keep Rincewind with her. And also by Two Flower, who has occupied himself by teaching the Four Horsemen how to play bridge. (For those not up on their apocalyptic studies, they would be Death, War, Famine, and Pestilence. Although in our modern world, Pestilence has retired, replaced by Pollution - at least that’s Pratchett’s take in Good Omens, which he wrote with Neil Gaiman.)

After that, it is off to Ankh-Morpork to try to save the world. And finally find out the answer to the crucial question of the sex of the great turtle on which the world rides.

If anything, The Light Fantastic is even better than The Colour of Magic. Pratchett seems to be finding a properly sardonic voice, and some of the familiar features of the Discworld universe come into view.

Pratchett continues to satirize modern society through the fantastic. In his sights in this novel are apocalyptic nuts of various stripes. As the world appears doomed to end, some head for the hills. Although not to escape, but “because the view will be better.” Others decide to go on a witch, I mean wizard hunt, seeking to kill off the wizards to appease the gods. (That the wizards are, on average, barely more competent than Rincewind doesn’t help matters.) Others are burning books.  Some others are taking advantage of the end of the world to make a profit. And the Druids are sacrificing a virgin. At least until Cohen shows up.

Two Flower continues to impress as the ideal form of the Ugly Tourist, driving Rincewind nuts by referring to things as “quaint” and “picturesque” and other head patting terms. And he has this rosy outlook that makes him believe that nothing will harm him because he is “not involved.”

There are far too many great quotes in this book to include here. I’ll pick a few, however.

About the age of the universe: the Discworld isn’t actually ancient, it just looks that way, because of “fake fossil bones put there by a Creator with nothing better to do than upset archeologists and give them silly ideas”
About Trymon, the wizard who seeks to master the spells and the universe:

Besides, there was something disquieting about young Trymon.  He didn’t smoke, only drank boiled water, and Galder had a nasty suspicion that he was clever.  He didn’t smile often enough, and he liked figures and the sort of organisation charts that show lots of squares with arrows pointing to other squares.  In short, he was the sort of man who could use the word ‘personnel’ and mean it.

From an exchange in the forest between Rincewind and Two Flower:

‘Do you think there’s anything to eat in this forest?’
‘Yes,’ said the wizard bitterly, ‘us’.
That is, after all, the conundrum of nature…

And on the Druids, who are all too often romanticised:

Of course, like druids everywhere they believed in the essential unity of all life, the healing power of plants, the natural rhythm of the seasons and the burning alive of anyone who didn’t approach all this in the right frame of mind...

On a related note:

You’ve got to face it, all this stuff about golden boughs and the cycles of nature and stuff just boils down to sex and violence, usually at the same time.’

One of my favorite quotes is a purely Pratchett conception of the universe:

The universe, they said, depended for its operation on the balance of four forces which they identified as charm, persuasion, uncertainty and bloody-mindedness.

As a theory, it may be on to something.

There were also a series of quotes about gender stereotypes that caused my second daughter to snort when she heard them. One of the minor characters is a female warrior (whose hard to pronounce name eludes me) who is employed by some of the wizards to find Rincewind.

She was too big to be a thief, too honest to be an assassin, too intelligent to be a wife, and too proud to enter the only other female profession generally available...any woman setting out to make a living by the sword isn’t about to go around looking like something off the cover of the more advanced kind of lingerie catalogue for the specialised buyer.

It isn’t easy being a woman warrior, though.

Not for the first time she reflected that there were many drawbacks to being a swordswoman, not least of which was that men didn’t take you seriously until you’d actually killed them, by which time it didn’t really matter anyway.

But the best one, and the one my daughter reacted to the most was this one:

Unseen University had never admitted women, muttering something about problems with the plumbing, but the real reason  was an unspoken dread that if women were allowed to mess around with magic they would probably be embarrassingly good at it …

I’m inclined to think that this is the real reason behind pretty much every attempt to keep women in their place and out of leadership.

We thoroughly enjoyed this particular book, and continue to find Pratchett to be delightful. I wish I had discovered his books when I was a child or teen, but at least I get to experience them with the kids.
Posted by Diary of an Autodidact at 4:24 PM