The kids and I traveled to see the total solar eclipse last month. I actually wrote this up right after we got back, but waited to publish it on my blog until the version I wrote for the Res Ipsa Loquitur (our County Bar Association magazine) to come out first. None of my pictures turned out, but my eldest daughter’s did.

Technically speaking, eclipses aren’t all that rare. A total solar eclipse (where the sun is completely blocked by the moon) occurs, on average, about every 18 months. However, each eclipse is visible only from less than 1 percent of the earth’s surface, so the chance of seeing an eclipse from any given location is much more rare. In fact, a given location will see an eclipse once in more than 100 years. That’s an average, not a hard number, so it could be more or less, depending on the rather complex mechanics of the earth, moon, and sun.

The continental United States hasn’t seen a total eclipse since 1979, when I was too young to have appreciated it. Also, it was over the northwest only, and it was mostly blocked by clouds. I follow astronomical events - we view the Perseid meteor shower most years, for example, and watched the last few lunar eclipses. We also attended the Astronomy Festival at Bryce Canyon National Park back in 2014. Thus, I put the 2017 solar eclipse on my schedule a couple of years ago, and made plans to see it. After all, the western US won’t see another total eclipse until 2045. If I am around, I’ll probably plan to see that one too. (The eastern US will get one in 2024 - plan ahead now…)

The path of totality went across the United States from northern Oregon down to South Carolina. The path itself is less than 100 miles wide, so it was important to find a spot within that narrow band so that we could see totality. I selected eastern Oregon for three main reasons: first, it was close enough for us to drive rather than fly; second, it had a high statistical likelihood of clear skies; and third, it was in the middle of nowhere, so we would (I hoped) avoid some of the crowds and traffic. Fortunately, all three proved to be true, and we had a great opportunity to see this phenomenon.

We camped in the Wallowa-Whitman National Forest, in the Elkhorn Mountains, just outside of the path of totality. We then drove a few miles south, to the Crane Flat staging area, which was set up by the Forest Service. Let me say that the Forest Service did a phenomenal job in preparation. They had information and swag at various locations along the main highways, and they set up the viewing areas with toilets and catering, and generally kept things running smoothly. They also were great with the kids, answering questions, and listening to their stories.

Morning dawned on Monday with brilliantly clear skies and pleasant cool temperatures. Unless you knew the eclipse was coming, there was no indication that anything was out of the ordinary. Then, around 9:15 AM, it began. Using the glasses to protect our eyes, we saw just a bit of a nibble out of the disk of the sun. The moon was moving in. Within a few more minutes, the sun looked a bit like the Death Star, then like Pac Man.

At this point, the sun still seemed bright, and the day warm. But soon, as the eclipse reached fifty percent coverage, it started to change. With half the light, it started to cool off, and the day wasn’t as bright. But, because the sun was still relatively high, rather than at the horizon, it felt much different from a sunset.

As more and more of the sun was blocked, it rapidly got colder and darker. And yet, the shadows weren’t right. Dusk should have long shadows, not short ones, and the sky should turn red and yellow, not deep blue. It was a peculiar feeling. 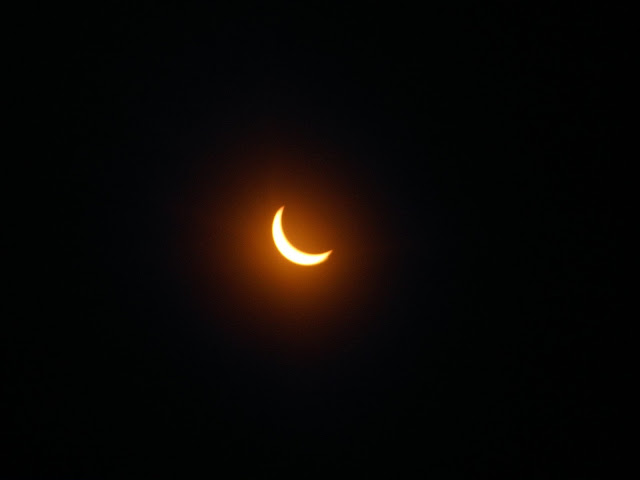 The eclipse approached totality, with only a sliver of sun left. It was darkish, like dusk, and at 5000 feet elevation, it was getting noticeably cold. Most of the viewers put on jackets or sweatshirts. Totality started just after 10:15. The last sliver of sun seemed to disappear fast. The last wink of light at the edge created the “diamond ring” effect for just a couple seconds, then totality. Cheers erupted from the forest around us from people camping just off the road. 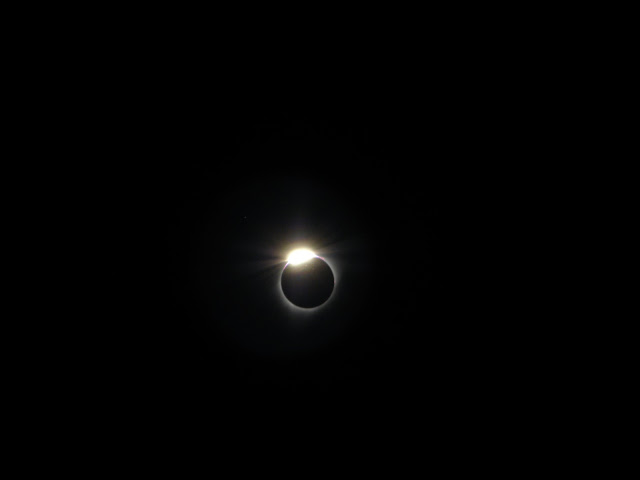 A total eclipse doesn’t create total darkness. Instead, the light is kind of like dusk, but oddly lurid. The reason why is that the sun’s corona provides as surprising amount of light. During the eclipse, the corona becomes visible to the naked eye. I must say, this was the most magical part of the eclipse, seeing that corona in person for the first time. In addition, a couple of solar flares could be seen. It was thrilling to realize either could have swallowed the earth many times over. The scale is just huge. 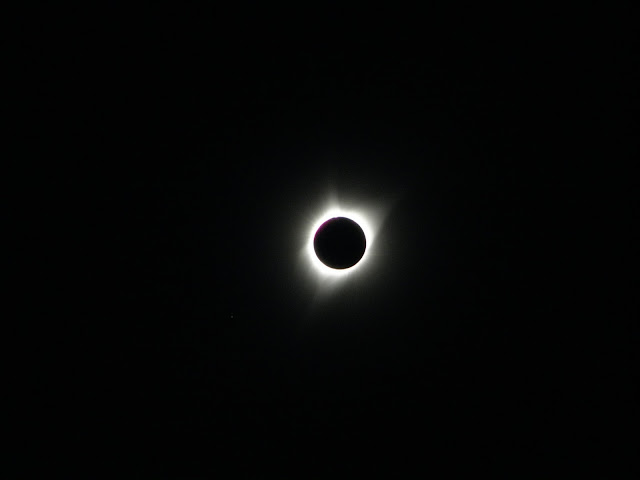 Totality, with a great view of the corona and a solar flare at the very top. Picture by Ella Swanson.

All too soon, totality was over. At our location, it lasted about a minute and a quarter. The “diamond ring” reappeared briefly, then the crescent, and the light gradually came back to full and the temperature warmed over the next half hour. It was over so fast, the event of a lifetime, but it was unforgettable. The kids and I drove a thousand miles each way to see it, and it was worth it to experience the event together.

Posted by Diary of an Autodidact at 12:06 PM