The Country of the Pointed Firs by Sarah Orne Jewett

One of the first book reviews I did before I started my blog and was still using the notes on Facebook was of Sarah Orne Jewett’s short stories. I really enjoyed those, and had intended to read her longer works sooner. However, the copy I read was a library book, and I never did get back to borrowing it again.

Fortunately, my wife found a lovely hardback of The Country of the Pointed Firs at a library sale. (And, just last month, I scored a Jewett collection from the Library of America for a buck at a used bookstore in San Diego - that’s an interesting story in itself.) So, I had a perfect excuse to enjoy this book. 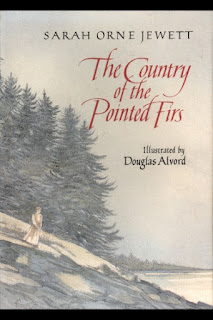 The Country of the Pointed Firs is not so much a novel as a collection of stories spanning a summer spent in the fictional New England town of Dunnet Landing, Maine. The stories also involve the same characters and are further connected by the relationships between those characters.

The unnamed narrator is boarding with Mrs. Almira Todd, a widow who supports herself by selling herbal remedies and renting out a room. Mrs. Todd knows everyone, and has a pointed, yet not harsh, observation about all. Mrs. Todd’s elderly mother and brother, who live on an island just offshore, also figure prominently in the story. There are other memorable characters, from Captain Littlepage, the eccentric retired fisherman who has never gotten over the death of his beloved wife, to Mrs. Martin, the elderly woman born on the same day as Queen Victoria who feels a certain kinship with the queen. Nearly all of the characters are older, at least middle aged, whose children are grown and usually fled from the decaying fishing village to seek their fortunes, and who have at least one foot in the past. This is typical Jewett - these are her people, the ones her physician father used to care for, and the ones she knew throughout her life. She writes their lives with gentle affection, and a keen eye for human nature.

Jewett lived in New England in the latter half of the 19th Century, and her writing harkens back to that time and place. Her stories are regional, but yet universal. This particular story also has a connection to Jewett’s life. She never married, but cohabited with a widow after the husband’s death. (She had been friends with the couple before that.) This “Boston Marriage” was possible because the women were self-sufficient financially, of course, but they appear to have been close friends at the very least. In this book, the narrator (who strongly resembles the author) has a special connection with Mrs. Todd during their time together in Dunnet Landing, and their friendship is the central focus of the book. And it really is a touching friendship, two older women enjoying each other’s company and companionship while navigating each other’s needs and expectations.

Jewett was an excellent writer, and I never fail to enjoy her use of language or her complex and memorable characters. A few lines are worth mentioning. In one, Mrs. Fosdick remembers the old days, when the town was a bustling seaport, and most of the residents had traveled abroad, Mrs. Todd included.

“I used to return feelin’ very slack an’ behind the times, ‘tis true,” explained Mrs. Fosdick, “but ‘twas excitin’, an’ we always done extra well, and felt rich when we did get ashore. I liked the variety. There, how times have changed; how few seafarin’ families there are left! What a lot o’ queer folks there used to be about here, anyway, when we as young, Almiry. Everybody’s just like everybody else, now; nobody to laugh about, and nobody to cry about.”
It seemed to me that there were peculiarities of character in the region of Dunnet Landing yet, but I did not like to interrupt.

Say what? The old folks thought the younguns were all the same and not as interesting as they were back in the day? Who knew this happened way back then?

On the other hand, Jewett herself kind of sympathised with this idea, because it was true that it was harder to be provincial and insular when you travelled abroad. Those experiences of difference broadened views.

More than this one cannot give to a young State for its enlightenment; the sea captains and the captains’ wives of Maine knew something of the wide world, and never mistook their native parishes for the whole instead of a part thereof…

In our day, we see this too. There is a strong connection between experience and knowledge of the rest of the world, and empathy toward outsiders - and also a preference for diplomacy rather than warfare. (See for example this bit on the difference between those who can find North Korea on a map, and those who cannot…)

Whether or not you have the funds to travel, all of us can at least travel in the sense of experiencing unfamiliar places and people through reading. By exploring outside our bubble, whether that is geographical, chronological, religious, ethnic, or financial, we can develop commonality with others around the work, throughout time, and despite whatever differences we may have. In fact, I would say that one of the best predictors of whether I can find common ground to discuss the things that really matter is whether a person reads and experiences outside their own bubble. I have found lately that this is nearly impossible with someone whose knowledge base is Fox News and Breitbart and a few pop-theology tomes. There is no empathy to grasp in common. Whereas readers - we always can find commonality somewhere, and there is a language that can take us outside of our own boxes to understanding each other and the world we live in.

For one exercise of that gift, Sarah Orne Jewett can transport you to the New England of 150 years ago, to the lives of ordinary people whose experiences are rather different than ours, but whose humanity is instantly recognizable. They too love and hurt, and experience loneliness and joy, and have dreams and hopes and fears. This is what good literature does, and why it is so necessary.

This particular edition was illustrated by Douglas Alvord. I have a soft spot for monochrome drawings, and these are really lovely, full of as much nuance of character as Jewett’s writing. 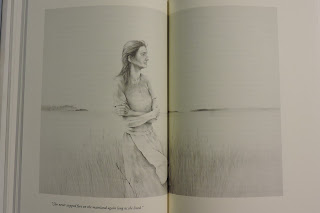 Posted by Diary of an Autodidact at 6:35 PM