The Teacher's Funeral by Richard Peck

We love listening to Richard Peck. Here are the previous Peck books we have experienced: 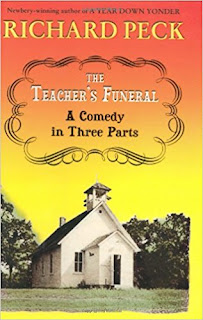 Peck has a wide range of topics and settings, and a careful touch with is characters, who are complex and believable. This particular book is narrated by Russell Culver, a 15 year old Hoosier country hick and set in the very early 20th Century. He wants nothing more than to be done with school and catch a train to the Dakotas and work with a newfangled steam combine.

Russell seems to come close to realizing his dream when the teacher at the one-room schoolhouse dies unexpectedly. However, his hopes are dashed when his high school aged sister, Tansy, applies for and is given the teaching job. Tansy has her work cut out for her. In addition to a recalcitrant younger brother among the pupils, she has to figure out how to reach the minimum number of students. Armed (sort of) with the new compulsory attendance law, she attempts to recruit the local redneck family, which doesn’t exactly go well. Russell and his best friend accidently set the privy on fire, a snake turns up in the desk of the youngest pupil, and the schoolhouse is almost blown up in a creative attempt to clean a chimney.

This book is, the title notwithstanding, a comedy. A rip-roaring comedy that kept the kids in stitches. (And yes, I thought it was funny too.) People fall in creeks, there are a whole bunch of snakes, there are a plethora of eccentric characters, and there is the feckless Russell, who grows up despite his best efforts.

A few scenes particularly stood out to me. First, as in many of Peck’s books, the parents are admirable while remaining human. Russell’s widowed father seems distant sometimes, but he pays more attention than Russell thinks, and often has the right thing to say or do at the right time. A man of few words, but genuine decency. Russell’s aunt is likewise intriguing - she declined to marry Russell’s father after his mother died, but lived nearby and helped out as family would back then. All while smoking a pipe when the minister wasn’t looking.

I also found the funeral itself both amusing and a bit creepy. The preacher (who is a bit of the old school) takes the opportunity of the funeral to rail against the children, who clearly are inferior to his generation, who are to blame for the teacher’s untimely death by harrying her to an early grave. Russell is worried that his dad will take the preacher’s admonition to go home and beat the little hellions seriously. He doesn’t, of course, but Russell has to start noticing who his dad is before he understands.

As always, Peck treats his characters gently, and with compassion. In the Peck world, there are always shades of grey. Even Russell is an interesting choice, because he is written sympathetically, but he is a flawed character. Actually, a bit annoying to someone like me who was the goody-two-shoes people like Russell hate. I loved learning as a kid, and study never bothered me. And hey, have you noticed the sort of things I read for fun? But Peck makes Russell real, and helps the (possibly bookish) reader see another perspective. It is hard not to root for Tansy too - she is the kind of teacher I would have loved to have: dedicated, creative, observant.

There probably isn’t a wrong choice when it comes to Peck, at least as far as I can tell. We have enjoyed all of the books we have listened too, and my sons in particular have been inspired to read additional titles from the library.

One final note. Peck himself (as he often does) adds a little afterword to the book, which he reads himself. In this one, he tells of the real life inspiration for a scene in the book. It turns out that his father actually did attend a hog butchering as the supposed city slicker, and acquitted himself admirably. Unlike the character in the book, however, his father did win the heart of the pretty girl.

This version was narrated by Dylan Baker - not my favorite reader, but not terrible either. My one quibble with a few of the Peck books is that the narration often has flaws. (My wife couldn’t stand the reading of Here Lies the Librarian.) I don’t think Peck himself narrates any of his books, which is a shame, because, if his introductions and afterwords are any indication, he is a fine reader.
Posted by Diary of an Autodidact at 1:32 PM