The Colour of Magic by Terry Pratchett

Source of book: Audiobook from my brother’s collection

“In a distant and secondhand set of dimensions, in an astral plane that was never meant to fly, the curling star-mists waver and part…”

And thus begins the first book in the Discworld series, which comprises the bulk of Terry Pratchett’s large and delightful output. 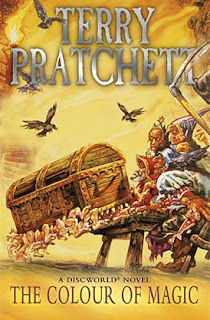 In the introduction to the paperback edition of this book, Pratchett explains that his inspiration for Discworld was pretty simple. He just took the ancient Indo-European cosmological myth, of the disc-shaped world supported by four elephants standing on the back of a turtle, added his characteristic sense of humor, and there it was. No maps, no logical plan for the world, no worries about continuity errors. Just a world that is both familiar and full of surprises, that entertains while telling us truth about ourselves and our own world. Pratchett admits with his typical self-deprecation, that a reader who has read some of his later books already knows more about what Discworld would become than he did when he started it.

Back in the day, there was a video game called Gauntlet that my brother and I used to play. Really one of the first multiplayer dungeon games - it was a lot of fun if you had it on your own computer. At the arcade, it was a legendary money eater.

Anyway, it was hard not to think of that game with the sendup of stock fantasy characters in The Colour of Magic. There is a barbarian warrior, Hrun. Except he is dumber than rocks and all brawn - he makes Conan the Barbarian seem like a great orator. There is the wizard. Except the wizard is Rincewind, the least competent wizard ever. Not just that, but bad things keep happening to him. Except that, in another sense, he is impossibly lucky. Add to this a dragon riding young woman bent on solidifying her power over her kingdom at the expense of her brothers, a guild of wizards intent on determining the most pressing cosmological question: the sex of the Great Turtle on which the world rests, and a living wooden chest made of sapient pearwood, which is immune to magic, and intent on protecting the worst tourist ever, and you have, well, The Colour of Magic.

This book introduces a number of the places, people, and ideas which will recur throughout the Discworld series. We meet, for the first time, The Watch, who have a talent for showing up at brawls just as soon as the real fighting is over. The Thieves’ Guild and the Assassins Guild - crime is thoroughly unionized and regulated in this world. The Unseen University, where wizards are trained. (As it becomes clear eventually, wizards are far less competent than witches in the Discworld, mostly because their sense of self-importance gets in the way of actually doing anything useful.) The mystical significance of the number eight, which must never be spoken by wizards.

And, of course, the colour of magic itself. (Pratchett, being British, uses that spelling - as well as British pronunciations.) In case you wondered, the colour is the eight color in the rainbow - “octarine.” If you can’t see it, you probably are not magical.

After the introduction of the basic cosmology of the Discworld, the story opens in the middle, with the great city of Angk-Morpork in flames, and three figures fleeing the flame. One is Rincewind, who tells of what happened before.

Rincewind was innocently sitting in a thoroughly disreputable tavern, when a round foreigner with four eyes shows up - along with a mysterious wooden chest which walks on its own, and has a nasty tendency to eat anyone who messes with its owner. This chest, made of “sapient pearwood,” is given the name of “The Luggage,” and plays a key role in the story. The foreigner is Twoflower, who hails from another place on the disk, the Agatean Empire on the mysterious Counterweight Continent. Twoflower is an insurance actuary, and has put together a sum of money to go on the vacation of a lifetime, to see all the attractions of Angk-Morpork for himself - particularly all the “quaint” ones, which turn out to be all the sordid, dangerous, and barbaric parts.

Rincewind gets involved because he is fluent in many languages - about his only skill, considering he flunked Unseen University. He is able to find common ground with Twoflower, whose only prior means of communication was a “phrases” book. (This is pretty hilarious - particularly to someone who is pathetically monolingual like me.) Twoflower offers to pay Rincewind handsomely to play tour guide - a proposition Rincewind finds insulting yet lucrative. Rincewind pockets his advance fee and attempts to flee, but he is captured by the Patrician of Angk-Morpork, who threatens to prosecute him if he doesn’t agree to keep Twoflower safe. After all, can’t have an international incident leading perhaps to war…

Twoflower is the Ugly Tourist in all his glory, taking endless pictures (using a camera which is an artistic and sarcastic imp in the box…), carelessly flashing his cash, and generally getting into trouble. And yes, it is definitely his fault the city burns down.

The adventures eventually lead them to an enchanted upside down mountain that houses semi-imaginary dragons, and a young woman intent on coopting a strong man to serve as figurehead while she roles her domains. Later, Rincewind and Twoflower end up on a jet airplane in an alternate world, on a slaver ship, and on the edge of the rim of the Discworld itself.

And in the end, it all turns out to have been due in large part to a wager between two of the gods: Fate, and “The Lady.” Fate, like Death, is supposedly never cheated. But The Lady appears to be doing it, in the service of Rincewind, of all people.

The gods are, in Pratchett’s world, a great deal like the Greco-Roman gods, mostly more powerful - and capricious - than humans, but otherwise much like them. As Pratchett puts in in an aside on the Discworld cosmology:

Precisely why all of the above should be so is not clear, but goes some way to explain why, on the disc, the Gods are not so much worshipped as blamed.

This line gets used in other books, I believe, and it is one of Pratchett’s lines that I was most familiar with before reading this book.

I should also mention another great line. Hrun the Barbarian is generally pretty good comic relief, as is his talking sword that everyone hates because it won’t shut up and stop giving unsolicited advice. We first meet Hrun as he inadvertently stumbles upon the temple of Bel-Shamharoth (kind of the Discworld Cthulhu) the “Soul Eater.”

On the whole, the unpleasant carvings and occasional disjointed skeletons he passed held no fears for Hrun. This was partly because he was not exceptionally bright while being at the same time exceptionally unimaginative, but it was also because odd carvings and perilous tunnels were all in a day’s work. He spent a great deal of time in similar situations, seeking gold or demons or distressed virgins and relieving them respectively of their owners, their lives, and at least one cause of their distress.

This book was the first, and it doesn’t show quite the polish or the depth of subsequent installments. But it is still a lot of fun. My boys particularly loved The Luggage. They had already read the book before we listened to it, so they knew all the funny parts in advance. My older girls are getting a bit of the jaded teenager thing about Pratchett, so they weren’t quite as enthusiastic. To each their own…

I look forward to future installments in the Discworld universe - they make great travelling books because of the pacing and humor.

***
Other Terry Pratchett books I have reviewed:

Posted by Diary of an Autodidact at 9:45 PM