A month or so ago, my wife and kids were downtown, and they drove by the marquee for Stars Theater, and my eldest saw that they were going to be doing Ragtime. My older son (who adores live theater of all kinds) also begged to go. It turned out we were going to have some of my girls’ best friends staying with us anyway while their parents were out of town, so it seemed a perfect time to put together an event. Because my wife had recently seen another production of the musical, it was my turn to go while my wife stayed with the little kids.


I wasn’t all that familiar with Ragtime, although I knew the name. I had kind of assumed it had been written in the 1970s (and it turns out the book on which it was based was). Rather, it was written in the 1990s - a fairly modern musical.


The musical is set in the era of Ragtime - the 1910s and the runup to World War One. Three separate threads come together. The first is the story of an upper class white family from New Rochelle, NY. The father (none of the family have actual names) leaves to explore the North Pole with Peary, leaving the mother in charge of the family. The second is the story of Coalhouse Walker, an African American musician from Harlem, and Sarah, the mother of his child. The third tells of Tateh, a Jewish-Latvian immigrant and his daughter. These three disparate experiences of America continue to be relevant today, 100 years after the setting. We still are struggling with the same issues: hostility toward immigrants and people of color, the fight for a living wage for working class laborers, police indifference and brutality, the use of sexual moralism to justify racism, and the adjustment to a more global and diverse world.


In addition to the main characters (which are fictional), there are a host of real-life people that make appearances. Harry Houdini, representing the immigrant who made good, Henry Ford and J. P. Morgan representing different kinds of capitalists, Peary as the spirit of modern exploration, Evelyn Nesbit the chorus girl with the too-lurid-to-be-true-except-it-was life, anarchist Emma Goldman, Booker T. Washington, and others. 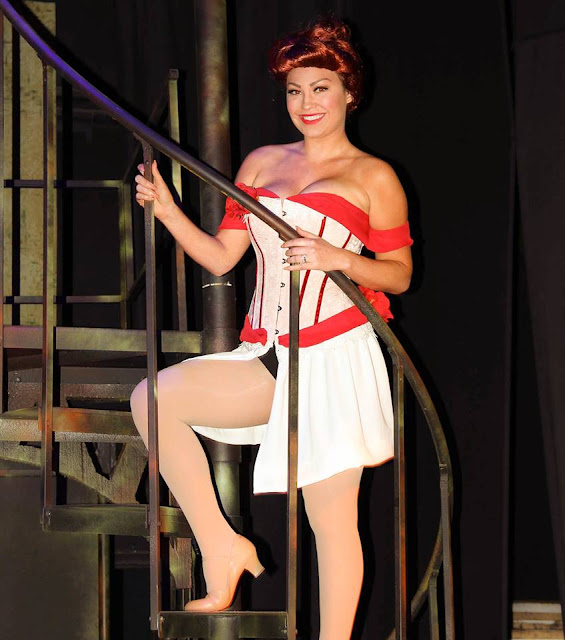 
The original production was a financial failure, not because it was unpopular (it did sell well) but because of the lavishly expensive production costs. The version we saw was more realistic in its budget, while retaining the key elements, including a live (if smaller) band, and a large cast.


The themes in this musical are best described as “adult,” not in the risque sense, but in the “problems that we adults are responsible for solving” sense. There is also some language - most painfully the realistic and necessary use of racial epithets. Racism and xenophobia have had a resurgence in the last few years, rising inequality and oppression plague us. Those of us who believe black lives matter are again called “nigger lovers” - although not in those exact words. Immigrants are still blamed for our problems, as a distraction from the fading power of labor and declining wages. But the dream of an America that is for all of us remains, and the arts community (among others) continue to fight to make it so.


Music is (naturally) the backbone of the story. It was with ragtime that African American music went mainstream, and pop music would never be the same. In the century to come, jazz, blues, rock and roll, soul, Motown, funk, and hip hop would each become, in a real way, America’s music. (Aaron Copland was one of the first to recognize that the truly American sound wasn’t the pseudo-European music of the upper classes, but the sound of the common man, from Appalachian bluegrass to Negro spirituals.)


And then, as now, there were plenty who were panic-stricken over the new music, and called it the devil’s work. People like Grandfather, who wanted Coalhouse to play some “coon music,” which Coalhouse points out was written by white people for white people, to conform to popular stereotypes. Ragtime was different. It was sophisticated and subversive, irresistible and danceable, and unashamedly black. Joplin was the first in a line of true originals, paving the way for Duke Ellington, Chuck Berry, James Brown, Lamont Dozier, and so many more. Our nation - and our world - is so much the richer because of them.


While Ragtime has some heavy themes, it also has some great humor. Evelyn Nesbit is played for laughs as well as pathos, the baseball game episode is hilarious (my kids were in stitches), and the very serious song “He Wanted to Say” ends with Younger Brother giving up on trying to express his feelings, and just saying “I know how to blow things up.”


For the most part, the singing was solid, and the acting as well. There were, as always, some real standouts that I think should be recognized. Jennifer Prow, who is a veteran of local theater (I think she may have been in Hello Dolly back when I was in the orchestra 20ish years ago) turned in an excellent performance as Mother, hitting the right emotional notes as she found herself changing from obliviously privileged to compassionate and aware. 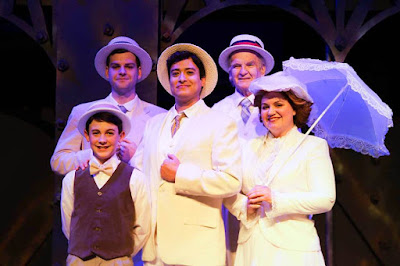 
Guy Martin is a prow, who owned his scenes as Tateh. I hope to see him around town in more productions. 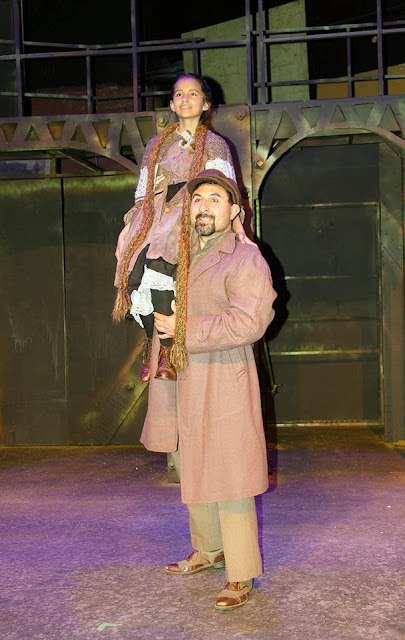 
Tevin Joslen was fantastic as Coalhouse. He’s a young guy with a good voice, strong acting chops, fluid dance moves, and a bright future. In his bio, he talks about the experience of being biracial, which added a layer of depth to his performance.


The most electrifying performance of the night went to Caley Mayhall as Sarah. I don’t think I have seen Mayhall in a lead role before. She is a Bakersfield native who came back home - and we are glad to have her. After her first song, I just sat there stunned. An incredible, powerful, expressive voice. She could have carried it without amplification, and the passion and emotion were so real. She and Joslen had strong chemistry too - and their duet was tight. Keep an eye on these two. 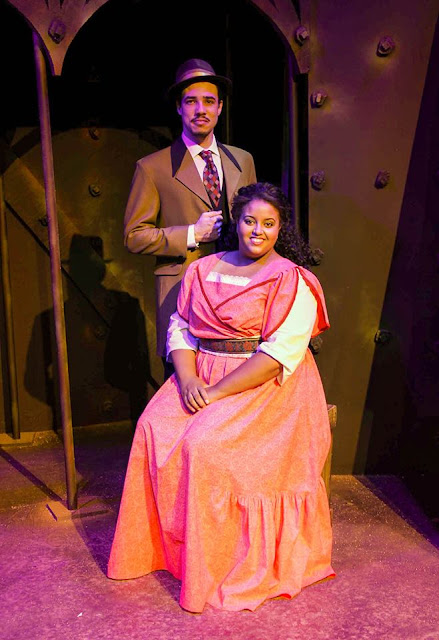 
Ragtime runs through next weekend. Come and hear the Symphony on Saturday, but go see Ragtime too.


I think this phenomenal Langston Hughes poem fits so well with Ragtime.


Let America be America again.Let it be the dream it used to be.Let it be the pioneer on the plainSeeking a home where he himself is free.(America never was America to me.)Let America be the dream the dreamers dreamed—Let it be that great strong land of loveWhere never kings connive nor tyrants schemeThat any man be crushed by one above.(It never was America to me.)O, let my land be a land where LibertyIs crowned with no false patriotic wreath,But opportunity is real, and life is free,Equality is in the air we breathe.(There’s never been equality for me,Nor freedom in this “homeland of the free.”)Say, who are you that mumbles in the dark? And who are you that draws your veil across the stars?I am the poor white, fooled and pushed apart,I am the Negro bearing slavery’s scars.I am the red man driven from the land,I am the immigrant clutching the hope I seek—And finding only the same old stupid planOf dog eat dog, of mighty crush the weak.I am the young man, full of strength and hope,Tangled in that ancient endless chainOf profit, power, gain, of grab the land!Of grab the gold! Of grab the ways of satisfying need!Of work the men! Of take the pay!Of owning everything for one’s own greed!I am the farmer, bondsman to the soil.I am the worker sold to the machine.I am the Negro, servant to you all.I am the people, humble, hungry, mean—Hungry yet today despite the dream.Beaten yet today—O, Pioneers!I am the man who never got ahead,The poorest worker bartered through the years.Yet I’m the one who dreamt our basic dreamIn the Old World while still a serf of kings,Who dreamt a dream so strong, so brave, so true,That even yet its mighty daring singsIn every brick and stone, in every furrow turnedThat’s made America the land it has become.O, I’m the man who sailed those early seasIn search of what I meant to be my home—For I’m the one who left dark Ireland’s shore,And Poland’s plain, and England’s grassy lea,And torn from Black Africa’s strand I cameTo build a “homeland of the free.”The free?Who said the free?  Not me?Surely not me?  The millions on relief today?The millions shot down when we strike?The millions who have nothing for our pay?For all the dreams we’ve dreamedAnd all the songs we’ve sungAnd all the hopes we’ve heldAnd all the flags we’ve hung,The millions who have nothing for our pay—Except the dream that’s almost dead today.O, let America be America again—The land that never has been yet—And yet must be—the land where every man is free.The land that’s mine—the poor man’s, Indian’s, Negro’s, ME—Who made America,Whose sweat and blood, whose faith and pain,Whose hand at the foundry, whose plow in the rain,Must bring back our mighty dream again.Sure, call me any ugly name you choose—The steel of freedom does not stain.From those who live like leeches on the people’s lives,We must take back our land again,America!O, yes,I say it plain,America never was America to me,And yet I swear this oath—America will be!Out of the rack and ruin of our gangster death,The rape and rot of graft, and stealth, and lies,We, the people, must redeemThe land, the mines, the plants, the rivers.The mountains and the endless plain—All, all the stretch of these great green states—And make America again!


And, because we all need some more Scott Joplin in our lives.

Posted by Diary of an Autodidact at 2:23 PM