I read at least some extended excerpts from Beowulf in high school. I do not remember the translator, but I suspect (knowing the curriculum) that it was some venerable older translation. I don’t think I read all of it, just the battle scenes. I definitely do not remember all the flashbacks and histories and poems thrown in. But I enjoyed it enough to have an overall positive impression.

A few years back, I discovered Seamus Heaney, through his collection The Spirit Level. He now stands as one of my favorite poets. A law school classmate recommended this translation at around the time my wife found a copy at a library sale. I can’t remember which came first, but in any case, it sure sounded promising.

I decided to read this aloud to the kids, despite my hopelessness in pronouncing all the names. With the exception of my second daughter (who is going through an early teen stage of ennui about everything), it was a hit. My kids are a bit weird, I suppose, because the didn’t find the idea of Beowulf tearing Grendal’s arm off to be particularly disturbing. In fact, the gore and violence was rather a welcome feature to the story. (Note: I wouldn’t say my kids are violent themselves, but they can tolerate a ridiculous amount of pain and blood. I wouldn’t recommend messing with them.)

This edition contains both the original Old English and the translation, so you can compare them. Well, assuming you can read Old English. I am passable at Middle English - I have read quite a bit of Chaucer in the original, and got fairly fluent working my way through C. S. Lewis’ Allegory of Love. More recently, I have been reading a collection of Pre-Shakesperean drama - the early cycle and miracle plays, all in Middle English. But Old English is a truly foreign language. 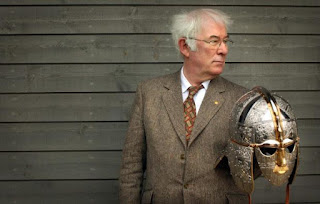 Because Seamus Heaney with a period helmet makes me smile.

Heaney’s translation is amazingly good. I particularly appreciate that he captures the feel of the old style, without making it too stilted and literal. One does not, for example, expect - or desire - a poem roughly 1000 years old, to sound like Elizabethan or Victorian poetry. The past is, as L. P. Hartley noted, a foreign country, and to import modern turns of phrase and values to an ancient work is akin to vandalism.

To that end, Heaney works to preserve the central poetic device of Beowulf. My kids were a bit surprised that it didn’t rhyme (yeah, I know, I need to talk about poetry more…). Instead, it uses alliteration. Heaney preserves that where he can, using repeated sounds to establish the rhythm.

Just a few lines can give an idea of the way it sounds:

Then a powerful demon, a prowler through the dark,
Nursed a hard grievance. It harrowed him
To hear the din of the loud banquet
Every day in the hall, the harp being struck
And the clear song of a skilled poet
Telling with mastery of man’s beginnings,
How the Almighty had made the earth
A gleaming plain girdled with waters;
In His splendour He set the sun and the moon
To be earth’s lamplight, lanterns for men,
And filled the broad lap of the world
With branches and leaves; and quickened life
In every other thing that moved.

This is also typical of the narrative. It requires patience. The poet will tell a bit, then digress, then tell a bit more, then muse on something, then tell some more, then circle back to a backstory of some character, and so on. You cannot be in a hurry, but instead let the music of the poem take you along.

I appreciated that it was easy to read aloud (except for the names, and there is no cure for that) and that I could easily make it flow. All in all, I highly recommend this translation.

A bit about the story. My kids quickly identified the fact that this story has a lot in common with The Hobbit. Not the plot, but the details. The king (or sinister villain) who gives rings both as a reward for loyalty and as a gift that binds the recipient to continued service. The dragon as guard of a treasure of which he knows every single coin. Come to think of it, a lot of what we believe about dragons in fantasy dates to Beowulf.

The values are both recognizable and very much of their time. This was in the period before the flowering of chivalry. Women in the tale exist mostly as chattel to be given away to cement alliances and as mead wenches. Even the queens go around serving libations to the thanes during the big feasts. Likewise, honor, reputation, loyalty, and fighting prowess are the chief virtues. A king is good because he is a badass in battle - and also because he is fair and honorable in gifting land, treasure, and women to those who assist him to victory. It is the patronage that matters - much more than “judging rightly” as other civilizations would consider the pinnacle of kingship.

Likewise, while wisdom isn’t discounted, it is secondary to physical strength. In this, there is a significant contrast to the ancient Greeks. Likewise, guile and subtlety are not admired. Beowulf chooses to eschew his sword and fight Grendal with his bare hands. It shows his manliness and his honesty. Certainly a bit different from Odysseus, who wins with his brains more than brawn. This is also a contrast with later English heroes. King Arthur may be a big guy with a strong arm, but he better known for his wisdom and skill at building and maintaining alliances with potential rivals. And Robin Hood is all guile. I remember reading the original stories and realizing that everyone beats Robin Hood in a fight. He never wins. But he inspires, and the victor always ends up joining the Merry Men. It is an interesting contrast in values. Times change, and the past is indeed a foreign country.

On the other hand, some other values really have aged well. Being fair and generous to those who support you is always in style. Knowing who your friends are, and defending them to the bitter end. Thinking twice before talking smack. Particularly about your betters. Courage in the face of overwhelming odds. Willingness to sacrifice one’s life for others. These are good virtues too. In an era of constant violence, loyalty is literally the difference between life and death. I wouldn’t like to go back to that era, though, but it is fun to visit in a story.

I am sure there are other good translations of Beowulf, but I thought this one was simply outstanding, both readable and true to the original spirit. And don’t stop there: Heaney’s poems are a real joy.

I say this because Doug Wilson is inexplicably popular in homeschool circles. He should be avoided for his defence of the institution of slavery, his affinity for white supremacists, for his bullying of others, particularly women, his defense in court of a serial pedophile, and eventual marriage of him to a naive young woman in his church. Also his AIDS denialism, his vision of sexuality as about power and dominance, and so much more. You can read a bit of my stuff on him here and here.

But even if Wilson were not a horrible person, there is an even stronger reason to stay away from his version of Beowulf.

Actually, Wilson has been in a long series of plagiarism scandals for years. Even his defense of slavery was largely cribbed from an earlier work - which he didn’t attribute. And since then, there have been multiple cases where whole paragraphs were stolen from other works.

In the case of Beowulf, it is important to note that Wilson has not attempted a translation. He is not fluent in Old English, and certainly lacks the background in that language to attempt an actual translation. Instead, as he has admitted, he took several translations done by other people, and used their work to “write” a new version. As might be expected, he copies most of the language from others, substituting a few of his own words to make it “different” enough that he can sell it.

I’m sorry. This isn’t a new work. It is essentially stolen from other authors who did the hard work of translation. DO NOT buy this. DO NOT support this thief.

Posted by Diary of an Autodidact at 10:10 PM