This post is the second of two which I have revised and expanded from a guest post I wrote for the blog Defeating the Dragons back in 2013. These were part of a guest post series called “Learning the Words.”


My first post, on the redefining of “Legalism,” contains a good introduction to the series, and the concept of Fundamentalist "Newspeak." I recommend reading that one first. 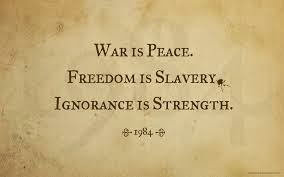 
As in so many other aspects of the Fundamentalist/Christian Patriarchy worldview, the twisting of the meaning of words comes through a long series of half-truths. An idea that is true to a degree will be taken just beyond that degree. Then the next idea builds on that, and so forth, until the original meaning of a word has traveled so far from its intuitive and normal meaning that it almost cannot be recognized.


Let me explain how this happens for the concept of “love.”


Throughout Christian culture - and even in our culture in general - there is the idea that “love” isn’t just a feeling. It is an active word that must manifest itself in our actions, not just in our emotions.


As I noted above, statements like this are true, to a point. Love, in the deep sense, cannot be merely an infatuated feeling like “puppy love.” If you really love someone, it will come out in actions. Country Music singer-songwriter Clint Black wrote a delightful and mushy song, Something That We Do (see video below), which captures the good side of this idea, the intertwining of emotion and action. (This was one of “our” songs when my wife and I were dating.) Our feelings of love and our loving actions feed on each other, support each other, and together make up this messy, complicated thing we call love.


The next step in the progression gets more interesting, however. Most of us Generation Xers are familiar with the concept of “tough love,” which was a bit of a trend and a buzzword in the 1980s and 90s. In essence, it was a refusal to enable self-destructive behavior. When one truly loved another, one would not contribute to a person’s self-destruction. Thus, it would not be loving to give one’s child money to buy drugs, for example. Or lie to protect a loved one from the legal consequences of committing a crime. The point of “tough love” is that by refusing to protect a person from consequences or contribute to bad behavior, one would be doing the more “loving” thing. The best result would be for the errant person to bottom out, and make a change for the better, rather than stumble along due to the enabling. Again, this idea is largely true, to a point.


Let’s follow the progression. Love is an action, not just an emotion. Enabling self-destructive behavior is not a loving action. Allowing a person to suffer the natural consequences of bad actions is the loving action, because it is more likely to lead to a change in behavior. We parents do this to our kids sometimes. A child might miss an opportunity to play with friends because he or she didn’t finish the schoolwork, for example. This is part of good parenting: teaching children to link actions and consequences, and take responsibility for their choices.


To this point, we haven’t gotten off track, but we have set the groundwork for what follows.


The next link is this: love means wanting and seeking “the best” for the beloved. Now this one is a genuine half-truth. Sometimes it is true. If a person also desires the same “best,” then it would be loving to help support that person in seeking that “best.” But what if something that is “the best” isn’t desired by the person? Let’s say I think that the “best” for one of my children would be a degree in medicine. That’s a good thing, surely! Unless the child would prefer a less lucrative career. (My second daughter wants to be a chef, for example.) Would I really be loving by wishing for the “best” rather than the “good enough” that my child wants? This is a dilemma for all of us in a variety of situations.


What comes next? For Fundamentalists, the next step is the definition of “best.” The “best” isn’t some subjective standard. “Best” means God’s best. It means God’s will for a person’s life. It means doing things “God’s way™. ”


Again, this is a half-truth in practice, if not exactly in theory. In theory, pretty well all Christians would agree that our goal in life is to do God’s will, to follow Christ, and so forth. So far, so good.


But it goes wrong in Fundamentalism because of the next turn. This requires a few assumptions:


1. We (the fundamentalists) know God’s will in most or all things.
2. God’s will is the same for everyone (of a certain gender, at least), regardless of situation, personality, or any other consideration.
3. God’s will can be expressed primarily as a set of detailed rules.


Love for a person is expressed by telling them to follow the Fundamentalist rules.


Or, if that fails to get them to follow the rules, taking other actions to force them to do so. Nagging. Expressing disapproval. If possible forcing them. In some cases, shunning until the rules are followed.


For some surprising reason, the recipient of this “love” usually finds the “love” to not be particularly loving.


Thus, the series of half-truths twists the meaning of “love” as it is commonly understood until it is unrecognizable. I actually had a Reconstructionist friend of a friend make the claim that forcing people to obey God’s law was the same as sharing the Gospel with them. Not “as important as,” not “similar to.” The same as. Because forcing people to follow the rules is now defined as the best way to show love. As the most extreme example, I would wager that Fred Phelps (“God Hates Fags.”) believes he is being loving. In fact, his grandson (see link below) confirms that he thought he was being loving.


Because this new definition of love, certain things that are generally associated with love can be disregarded. How about communication? Seeing the other side’s point of view? When one already knows God’s position on everything, that is all that is necessary. (Conveniently, you already know God agrees with you.) Empathy? Not so much, obviously. Bearing each others' burdens? Those burdens are self inflicted in the Fundamentalist view. First start following the rules, then we talk.


The result is this: the twisted definition of “love” enables the fundamentalist to believe that he or she is loving while engaging in behavior that is, in reality and common understanding, unloving.


This, from a former Westboro Baptist Church member - and (to be redundant), a member of the Phelps family:


“I realized people outside of the church showed me unconditional love, like when I worked at the hospital. When I started working there they told me that they expected me to show respect for every other person, and that they would respect me in return… and the thing was, it was actually easy. The people at the hospital were very empathetic… they showed respect for each other and treated each other as equals, and I didn’t feel that way when I was at the church. Experiencing love on the outside definitely warmed me over.”


“I’ve learned to forgive them, because I believe that they’re in a mind trap. That mind trap is their belief that the Bible is infallible and that their interpretation of it is infallible… I have absolutely no hard feelings toward them anymore. I don’t think I need to hold them to some form of public ridicule because of that– it’s just their belief that they will go to hell if they don’t say the things they say, and if they don’t show that seeming lack of empathy and tell them they’re going to hell, because they think this is what loving your neighbor looks like… They don’t mean to hurt people, so to speak, they think that they’re obeying the commands of God and they’re scared that if they don’t do the things that they are doing, that they’ll go to hell.”


This is a good take on how “love” is twisted to mean “hate,” by fellow former Gothardite, Micah Murray. There are so MANY crazy quotes, particularly from the New Calvinists, showing just how important hat is to them.


I disagree with this author’s conclusion regarding the nature of true Christianity, but the rest is spot on. I have seen all of his list of toxic expressions of "love" in action, either in my own life or the lives of those I know.


At least a few preachers are honest about what they believe:


[O]ne of the prime indicators of whether you are literate or not—if you are a true child of God—is whether or not you hate it. The fear of the Lord is the hatred of evil. If you don’t hate a good deal of what is going on, then it is clear you can’t read.


“They shall know us by our hate…” Yeah, sure, Doug. And nice way to insult anyone who disagrees with you as illiterate.

“How to Hate Better”


It contains this gem, which explains what we are supposed to "hate":


“4. Learn to hate every form of egalitarianism, feminism, metrosexuality and associated swisheries, pomosexuality, and androgyny. In the image of God He created them, male and female (Gen. 1:27). And every true Christian has since that time said, vive la différence. On a practical level, the single biggest theological issue of our generation is what God allows as a turn on, how we get to the point of orgasm, and whether or not that experience is a gift that must function under authority. You cannot be wrong on this without being wrong everywhere else.”


Now isn’t that nice. The gift of orgasm must “function under authority.” I’m sure my wife will LOVE that. Actually, since we are in an egalitarian marriage and we both are feminists, presumably we are of the devil and must be hated...


“God hates, right now, personally, objectively, some of you.”


And these guys’ good buddy, John Piper too. Micah Murray’s post has more links to similar statements. As I said, at least they are honest about how they think. War is Peace. Freedom is Slavery. Ignorance is Strength. And, Hate is Love.


Clint Black has much better theology of love, in my opinion:

Posted by Diary of an Autodidact at 9:19 PM