A Night Hike at Pinnacles

To go in the dark with a light is to know the light.
To know the dark, go dark. Go without sight,
and find that the dark, too, blooms and sings,
and is traveled by dark feet and dark wings.


One of the things that is hard to do when camping with small children is to get away from the campsite after bedtime. We have managed to attend ranger talks, however, despite the fact that they often go past the “witching hour of preschoolers.” We also stretched a bit for the Astronomy Festival at Bryce Canyon National Park last year, thanks to the close proximity of the telescopes to our campsite. (Ask me no questions, I tell you no tales.)


On this trip, however, my parents were nice enough to stay back at the campground with the two littlest, so that the older kids and I could take a ranger-led moonlight hike. When we signed up, the ranger with the list warned that it was “a bit zen,” and thus might be a problem for children. I figured that my older ones were up to the challenge.


During the day, Pinnacles can be a bit of a zoo, unless you start early. However, after the sun goes down, it is practically deserted. Of the 24 who signed up, only three others actually showed up for the hike. Ranger Peter, a retired ranger who spent 16 years at the park before switching to volunteer status several years ago, led the hike, and explained that we would be hiking without lights except for a couple of cave sections where red lamps should be used for safety. We also hiked in silence, except for a few spots where he recited inspirational poems or quotes touching on attentiveness to nature and silence. (One of which, the quote above, was memorable enough to last until I got an internet connection.)


It is hard to really capture the magic of silent hiking under the stars in words. Pictures cannot do it justice. You just have to be there.


During the day, we are unaware of just how noisy our boots are. Even on a silent hike, the birds and breezes tend to drown the more subtle sounds. But after dark, away from civilization, the world just melts away.


I couple of years ago, I had the amazing opportunity to watch the Perseid meteor shower from the John Muir Wilderness at 11,000 feet. Flat on my back, in the middle of nowhere, watching the dust inflame the skies.


Here at Pinnacles, the magic is in moonlight and shadow. In the sound of the bats chirping past one’s ears as they leave the cave, the frogs at the reservoir that seem almost painfully loud to the ear accustomed to quiet. Red rocks become both grey and more vibrant, if that makes any sense. Every shadow across the path looks hard and etched. One must tread gently and cautiously to avoid missing steps or failing to miss rocks. The universe seems immense and yet close enough to touch.


It was interesting sharing this with my older three kids. They all did fine, and were commended for keeping the mood. The most positive feedback was from my older son (third child), who wielded our light (and did an outstanding job, I might add), and who had the most to say afterward. Whether any of them yet feel the mystery, it is hard to say. I am the romantic of the family, after all.


If it isn’t obvious already, I am a night owl, and I love to stare at the stars. And, if I am honest, I am a sucker for a moonlit walk. Particularly out in the wilderness.


The dark, too, blooms and sings. 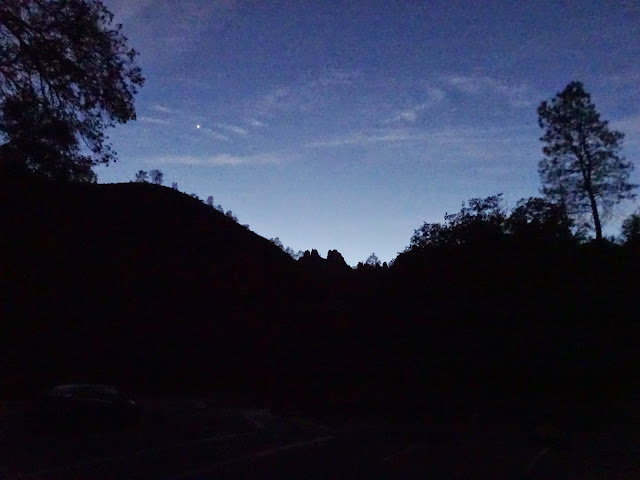 Dusk over the high peaks, with Venus.
Pinnacles National Park, March 28, 2015
Posted by Diary of an Autodidact at 9:42 PM