The Carpet People by Terry Pratchett

Source of book: Audiobook borrowed from the library.

I previously read The Wee Free Men (reviewed here) by Pratchett, and discovered a new author. I would have loved to have read his stuff as a kid, but I am enough of a big kid to go for them now.

I selected this book as our audiobook for our camping excursion to Joshua Tree National Park (stay tuned for a post - and pictures - on that) for the simple reason that it was the most interesting audiobook of approximately the right length for our travel time at our library. (Or, at least it was what caught my eye first.) It turns out that my second daughter has read another Pratchett book, The Amazing Maurice and His Educated Rodents. Big surprise there, from the girl who adores all things mouse. 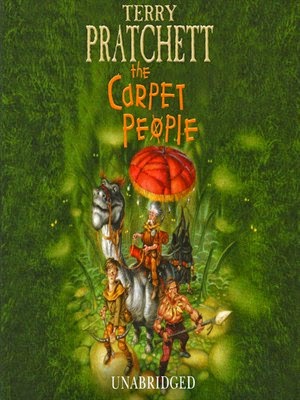 Anyway, The Carpet People was a big hit, thoroughly enjoyed by the kids and myself. This is an important consideration, because I rely on books to keep me alert during the longer solo drives.

The Carpet People is a peculiar book. As the author says in his forward, it was written by “two authors, and they were both the same person.” The original story was published in 1971 as Pratchett’s first novel. Later, after his success, he revisited the book, and made substantial revisions to reflect what he saw as his maturing craft as an author. We listened to the revised version, which holds together rather well. The seams, wherever they are, are well hidden.

Pratchett’s main claim to fame is his Discworld series. It is hard to describe in some ways, as it is more of a world with adventures that occur in it, but do not necessarily follow a story arc or the same characters. In fact, The Wee Free Men and The Amazing Maurice are both Discworld books, but have next to nothing to do with each other, except that they take place on the same world, and are both examples of Pratchett books aimed at “Young Adults” rather than grownups.

Like many recent “children’s” movies, these books contain plenty that is amusing to adults - and a remarkable amount of grownup philosophy. Come to think of it, this is and has been a hallmark of truly lasting children’s literature from time immemorial.

The world of The Carpet People, however, is unrelated to Discworld. Instead, it is quite literally, a carpet. After all, what if microscopic fairy folk were living in the carpet? What would they be like?

In this case, they are a mix of sentient races representative of different cultures and eras in societal development. The thread of the story (sorry, that is one bad pun from the book) follows the Mungrungs, a primitive tribal society. Another race is the Dumii, who invented and run the Empire. (They are ruled by emperors because “they are easier to get rid of than kings.”) The Empire seems like a cross between ancient Rome (for its control of many lesser kingdoms and tribes) and a bureaucracy of accountants. So, a bit as if the Department of Motor Vehicles ran the empire, rather than soldiers. The Deftmenes are more organized tribe of very short beings, ruled by their king, the colorful and fearless Brocando, who plays a significant role in the story. There are also the Wights, a race that can remember the future as well as the past - at least until the future changes, which makes for a key development in the plot. There are a few others, but the most notable are the Mouls, the villains in the story.

The characters are memorable too: Snibril, the younger brother of the chieftain of the Mungrungs, who serves as the protagonist; Glurk, his older brother, bigger in brawn than brains, but possessing a reasonable amount of good sense; Pismire, the shamman of the tribe, who tells stories that “are not necessarily untrue just because they are stories;” the aforementioned Brocando; and Bane, the retired Dumii general. 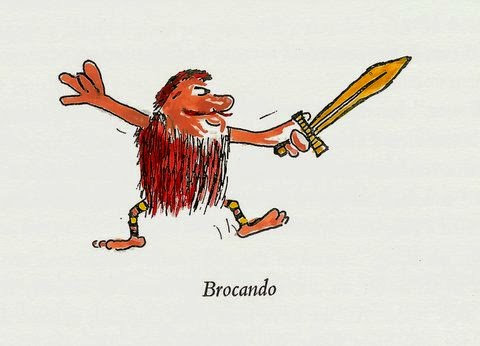 Surely you knew I would love the short character with the outsize dose of self-confidence...
Illustration by the Author

As with any good fantasy world, there is an element of religion/superstition. In this case, there is a phenomenon known as “Fray,” probably a vacuum cleaner or broom. The evil Mouls worship Fray, and this worship determines their goal. Since they observe that Fray is a destroyer, leveling buildings and injuring and killing the inhabitants of the carpet, they believe that their goal in life likewise should be to go about destroying and enslaving everyone else. (They can sense Fray’s approach in advance, and thus avoid being destroyed themselves.) This is a bit of a pointed satire that perhaps hits a bit too close for comfort. However, it does indeed illustrate an important truth: Our view of God colors our actions. If we view God as angry and vengeful, eager to destroy others (those not like us), we too will act in accordance, and become destroyers. If we view God as obsessed with the tiny cultural details, we will obsess about them ourselves, and become Pharisees. If we view God as concerned about the plight of the poor and powerless, we might come to resemble St. Francis of Assisi or Mother Teresa.

In addition to his perceptive portrayal of these greater philosophical points, Pratchett is delightfully snarky about politics. Whether it is the impossible bureaucracy which leads tribes like the Deftmenes to fear the very act of counting, or the illusion of caring which is a central tenet of political life, Pratchett is able to come up with a delightful turn of phrase that brings a knowing smile. I wish I had had the ability to write some of them down, but that sort of thing isn’t either plausible or advisable while piloting 11,000 pounds of truck and trailer down a highway. However, the magic of the internet was able to produce a few of the ones I remembered in a “sort-of” way.

“They called themselves the Munrungs. It meant The People, or The True Human Beings.
It's what most people call themselves, to begin with. And then one day the tribe meets some other People or, if it's not been a good day, The Enemy. If only they'd think up a name like Some More True Human Beings, it'd save a lot of trouble later on”

This is so true both historically and in actual practice. The “other” remains scary, and we tend to dehumanize anyone we perceive as an enemy. For the Mouls, this literally means that they will conquer, enslave, and finally ingest all other races.

The other quote I found was this description of the central city of the Dumii capitol:

“Normally its narrow streets were crowded with stalls, and people from all over the Carpet. They'd each be trying to cheat one another in that open-and-aboveboard way known as "doing business.”

Not quite how Adam Smith put it, but a reasonably accurate paraphrase. (Seriously, The Wealth of Nations is a lot of fun, in an 18th Century sort of way, and it definitely says some stuff that many conservatives like to forget that it says. It is remarkably anti-corporate and anti-bank, and it explains the concept of “rent-seeking” so vital to lobbying today. I recommend it!)

I’ll end with one final thought: is the fact that we cannot know the future a curse? Or is it a blessing? For the Wights, the idea that the future can be changed and that one can choose one’s path - and to a degree one’s future - is an unbearable burden. They cannot see how other beings can possibly live and function in such an open ended way. Much better for them to “follow the thread” that they can remember all at once.

If this sounds like a heavy read, I have been misleading. All this philosophy is mere incident to an engaging adventure story, which takes place in a magical and well-developed world. I found myself wishing there were a whole series about the carpet, just so I could explore the world further.

We plan to order some other Pratchett books from the greater library system for some of our future trips, so expect to see some further reviews here. I think Pratchett will take a place alongside our other favorites, Alexander McCall Smith, Kate DiCamillo, and Richard Peck, in the rotation.

The audiobook also included a serialized short story by Pratchett which introduced the characters in this book. It was a more straightforward travel narrative, with a few incidents. However, it does show the genesis in Pratchett’s mind of the main characters. In the final version, all of the characters are a bit better developed and complex. The greater space and the fact that Pratchett was no longer a teenager allow for a bit more nuance.
Posted by Diary of an Autodidact at 9:31 PM