I’ve read a lot of heavy stuff this year, including the 900 page Daniel Deronda, The Structure of Scientific Revolutions, Railroaded, and Iron Curtain. I am almost done with G. M. Trevelyan’s monumental work, The Stuarts. And by “monumental,” I also mean it could double as a tombstone. (Actually a very interesting book - but long.)

So, I was in need of some lighter reading.

This book - and author - came highly recommended from two different literary friends who share a love for good grammar and nerdy stuff. First was my cousin-in-law Jennifer, the English teacher. We share a dislike of bad writing, pseudo-science, and faulty punctuation. She also married my geekiest cousin - and believe me, he has competition. (I remember him using Euler’s Identity as the basis for a password.) The second is my friend Karen, who also reads Anthony Trollope and Greek tragedies, and blogs about all kinds of stuff - including bad grammar.

So, if both of them recommended the same author, I figured I would give him a try. 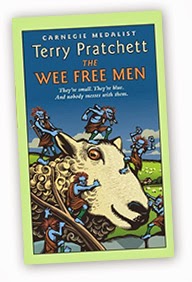 I was not disappointed. The book was filled with bad puns, sly references to history, culture, and the worlds of fantasy and literature. Also, lawyers figure prominently in the plot of this book.

The “Wee Free Men” of the title are a race of small wood fairies (or something like that) that also call themselves Nac Mac Feegle. The author also refers to them as “pictsies.” Yes, that is a terrible pun on “pixies,” but it is also a pretty good description. They are based somewhat on the Picts (the early Scottish tribes), and suffer from all the bad Scottish stereotypes: they drink and swear and brawl, have red hair and blue battle tattoos, and speak a sort of Gaelic. They are afraid of nothing - except lawyers. And, the related fear of having their names written down, because that would mean indictments and summons and stuff like that. In a particularly felicitous nod to Tolkien, their swords glow bright blue in the presence of lawyers.

Other good lawyer stuff: in the climactic scene, the Wee Free Men find themselves charged with, among other offenses, “Using Offensive Language (taking into account ninety-seven counts of Using Language That Was Probably Offensive If Anybody Could Understand It).” Also, I learned a very good reason why one should not sue one’s fairy godmother for breach of contract.

The heroine, Tiffany, finds herself engaged in a battle with the queen of fairyland when the two worlds collide. She gets advice (and a toad) from a witch, and sets off with her frying pan in hand, her memory of her grandmother (who was also a witch) to guide her, to rescue her toddler brother from the clutches of the queen. She makes an alliance with the Wee Free Men, as they are in need of a leader, but have extensive knowledge of fairyland.

I won’t spoil the plot, but I will mention some things I really liked.

First, I think Pratchett may have borrowed his concept of fairyland as the place of dreams from C. S. Lewis. In The Voyage of the Dawn Treader, Lord Rhoop is rescued from a dark island where dreams come true. Not daydreams, but real dreams. Nightmares. Pratchett expands this idea. In his fairyland, everything comes from dreams. All the scary creatures. The “dromes,” which capture one in a dream. One of one’s own dreams, or those of someone else nearby. Even the scenery behaves as it does in a dream.

And things were not...finished. Like the trees in the forest they were heading toward, for example. A tree is a tree, she thought. Close up or far away, it’s a tree. It has bark and branches and roots. And you know they’re there, even if the tree is so far away that it’s a blob.
The trees here, though, were different. She had a strong feeling that they were blobs, and were growing the roots and twigs and other details as she got closer, as if they were thinking, “Quick, someone’s coming! Look real!”

I had never thought of dreams that way, but Pratchett is exactly right. Whatever you “focus” on in a dream has detail, but otherwise, it is indistinct. Throughout the book, the dreamlike details are true to real life dreams. I suspect the author spent far too much time thinking about dreams in order to make the idea work this well.

Pratchett also has some amusing observations about children.

Anything could make Wentworth sticky. Washed and dried and left in the middle of a clean floor for five minutes, Wentworth would be sticky. It didn’t seem to come from anywhere. He just got sticky.

Or this exchange between Tiffany and Roland, a youth that she ends up rescuing.

“And then she [the queen] told me to sing and dance and skip and play,” said Roland. “She said that’s what children were supposed to do.”
“Did you?”
“Would you? I’d feel like an idiot. I’m twelve, you know.”
“Why did she want you to skip and play?” said Tiffany…
“She said that’s what children do,” said Roland.
Tiffany wondered about this. As far as she could see, children mostly argued, shouted, ran around very fast, laughed loudly, picked their noses, got dirty, and sulked. Any seen dancing and skipping and singing had probably been stung by a wasp.

Roland, the son of the local aristocrat, is a bit dim, so it is particularly galling to Tiffany when he gets all the credit for his own rescue, simply because he is a boy and older than her.

I also liked Tiffany’s response to having an uncharitable thought.

She tried to pretend she hadn’t thought that, but she was treacherously good at spotting when she was lying. That’s the trouble with a brain - it thinks more than you sometimes want it to.

Once Tiffany decides to become a witch, she discusses with a few other witches how she will be able to support herself. After all, it is an iron-clad rule that she must not use magic for her own gain.

“I make good cheese,” said Tiffany.
“Cheese, eh?” said Mistress Weatherwax. “Hmm. Yes. Cheese is good. But do you know anything about medicines? Midwifery? That’s a good portable skill.”
“Well, I’ve helped deliver difficult lambs,” said Tiffany. “And I saw my brother being born. They didn’t bother to turn me out. It didn’t look too difficult. But I think cheese is probably easier, and less noisy.”

And, because I can’t resist a terrible pun, I’ll end with this:

“Witches have animals they can talk to, called familiars. Like your toad there.”
“I’m not familiar,” said a voice from among the paper flowers. “I’m just slightly presumptuous.”

Posted by Diary of an Autodidact at 1:11 PM