Reading with my Kids: Halloween Edition

Source of books: I own all of these.

I didn’t initially plan it this way, but we ended up reading three scary or spooky tales for the month of October.

The Pied Piper of Hamelin by Robert Browning

I suppose most have at least a passing idea of the plot, and may have read a prose adaptation. But seriously, the poem is so much fun! Why haven’t more people read it? I remain puzzled about the lack of interest in poetry these days, and have yet to form a grand unification theory of of poetical uninterest.

Anyway, my kids loved this poem. I knew that my second daughter, who has loved all things rodent since she adopted “Mousie” as her favorite stuffed animal before she even turned one. She now has more stuffed rats and mice than I can keep track of, and finds them fascinating - even the dead ones our cat leaves as presents. I had to explain a few words, but not many. Browning’s skill as a poet makes this a good introduction to narrative poetry for children - or adults.

Their favorite part, which I had to read over and over for them afterward:

Rats!
They fought the dogs and killed the cats,
And bit the babies in the cradles,
And ate the cheeses out of the vats,
And licked the soup from the cooks' own ladles,
Split open the kegs of salted sprats,
Made nests inside men's Sunday hats,
And even spoiled the women's chats
By drowning their speaking
With shrieking and squeaking
In fifty different sharps and flats.

The legend wasn’t original with Browning, of course. It had existed at least since the 1300s, and may have arisen as a parable for an epidemic which killed a large number of children. (This would be a bit ironic, since at the time the legend arose, the Black Plague was known, but its cause - fleas transmitting the bacteria from rats - was not.

Other notable versions of the tale were written by the Brothers Grimm (the version perhaps most familiar) and Goethe. I am particularly partial to Browning’s version. It has a bit of sly humor, and delightful rhymes. And, let it be said, a moral that lawyers everywhere can appreciate:

So, Willy, let me and you be wipers
Of scores out with all men -- especially pipers!
And, whether they pipe us free from rats or from mice,
If we've promised them aught, let us keep our promise!


The Rime of the Ancient Mariner by Samuel Taylor Coleridge

This is another poem I loved when I first read it in high school, and thought it might work well for the kids - particularly since they wanted to hear something spooky. (My kids are fairly fearless, and find the macabre fascinating. I’m not sure where that came from.)

This poem has some interesting social commentary, which the kids didn’t really get yet. So, a few things went over their heads. However, they enjoyed the story itself, and the older ones definitely understood the problems with killing purely for sport or boredom. My kids are interested in birds, including the condor, and love seeing and identifying them whenever we can. They also liked the ghost ship and the game played for the life of the sailor.

Although I didn’t really try to explain it to the kids, I did note the bit about superstition. I hadn’t really seen this before, but it is interesting now, to my older self. The other sailors initially cheer the killing of the albatross because they think it brought them wind, and then they change their minds rapidly. Either way, it is superstition adopted to match whatever current circumstances are at any given time.

I definitely have to quote the best known section, full of memorable lines.

Down dropt the breeze, the sails dropt down,
'Twas sad as sad could be;
And we did speak only to break
The silence of the sea!

All in a hot and copper sky,
The bloody Sun, at noon,
Right up above the mast did stand,
No bigger than the Moon.

Totally unforgettable. Coleridge brings the picture to life, and uses the rhythms of the traditional ballad stanza to emphasize the rocking and the flow of the narrative.

And then the ghost ship appears.

The western wave was all a-flame.
The day was well nigh done!
Almost upon the western wave
Rested the broad bright Sun;
When that strange shape drove suddenly
Betwixt us and the Sun.

And straight the Sun was flecked with bars,
(Heaven's Mother send us grace!)
As if through a dungeon-grate he peered
With broad and burning face.

Alas! (thought I, and my heart beat loud)
How fast she nears and nears!
Are those her sails that glance in the Sun,
Like restless gossameres?

Are those her ribs through which the Sun
Did peer, as through a grate?
And is that Woman all her crew?
Is that a DEATH? and are there two?
Is DEATH that woman's mate?

Her lips were red, her looks were free,
Her locks were yellow as gold:
Her skin was as white as leprosy,
The Night-mare LIFE-IN-DEATH was she,
Who thicks man's blood with cold.

The naked hulk alongside came,
And the twain were casting dice;
'The game is done! I've won! I've won!'
Quoth she, and whistles thrice.

It is well worth seeking out the Gustave Doré illustrations - particularly for this scene. The ghost woman throwing dice with Death in a ghoulish game. 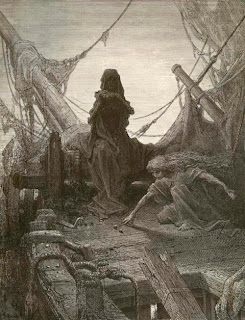 This poem was a little more challenging than The Pied Piper, but still rather accessible.

The Legend of Sleepy Hollow by Washington Irving

Washington Irving is on my short list of unjustly neglected authors. (I would also put Anthony Trollope and P. G. Wodehouse on the list.) Again, most are familiar with this tale - at least through the many thoroughly bastardized movie and television adaptations. Alas, most think that it is the tale of a supernatural being that terrorizes Ichabod Crane. This completely misses the point of the story - and indeed much of Irving’s work. (It is the equivalent of describing Scooby Doo as being about actual ghosts and monsters rather than the debunking of said legends.) Sleepy Hollow is the story of a rather designing young man, eager to marry for money, who is scared off by an enterprising rival, who takes advantage of the fact that Ichabod has spent far too much time marinating his brain in the witch hunt tales of Cotton Mather. (Specifically, Wonders of the Invisible World.)

While I enjoy Irving greatly (Tales of the Alhambra and Tales of a Traveler come to mind as favorite story collections - but his non-fiction is rather good too), his language was a bit over the heads of the children in this case. They liked parts of the story once it got going, but the opening required a good bit of explanation. I expect it will be a good one to return to when they get older.

The two parts they did like were the description of Ichabod’s drooling over the feast put on by the father of his intended conquest, and the chase scene at the end.

Bonus fun facts about Irving: he originated the phrase, “the almighty dollar,” the use of “gotham” for New York City, and the idea of Santa Claus flying through the sky in a wagon or sleigh. How about that for influence?

I suspect we will revisit Irving at a later time, when the advanced language will be more understandable, and the dry humor more familiar.

Anyway, three interesting works with a spooky theme. I can’t wait until I can introduce them to Edgar Allan Poe in a few years.


Okay, one final bit. My dad used to sing us this song when we were kids.
Posted by Diary of an Autodidact at 10:50 PM