The Disappearing Spoon by Sam Kean

Source of book: I own this. (Christmas gift.)
Date originally posted on Facebook: March 13, 2011 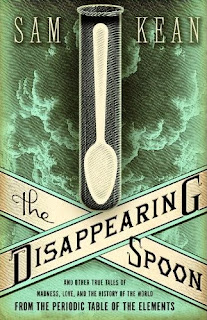 This book bears the subtitle of “…and other true tales of Madness, Love, and the History of the World from The Periodic Table of the Elements.” Exciting stuff – at least to a geek like me.

If you loved high school chemistry, and remember a bit of it, but never became a chemistry major; you are the target reader for this book. If you hated chemistry, give it a chance anyway, because the tales told may help you associate all that stuff about electron shells and the four fundamental forces with real people and events. You may also, like me, attempt to decide which is more fun to say: molybdenum or ytterbium.

As to the science part of the book: Sam Kean assumes a passing knowledge of nuclear chemistry, but is kind enough to “refresh the recollection” of the witness, I mean reader, from time to time. It helps if you know protons, neutrons, and electrons, and have a basic idea of how chemical bonding occurs. On the other hand, it would be impossible to mistake this book for a scientific treatise. Kean spins his tales of the discovery of elements, of odd historical facts or events tied to certain elements, and never gets bogged down in too much detail. His focus is on people, events, and just plain fun bits of information about the elements.

The title comes from the element gallium, which is a metal at room temperature. Ok, room temperature outside of Bakersfield, perhaps. It melts at 87° F, which led to an old trick of giving a guest a gallium spoon to stir his or her tea.

What did we do before the internet? Here is a link to watch this:

Also interesting is the use of elemental poisons. Arsenic is the best known, of course, and polonium 210 made the news last decade, but there are plenty of interesting elements that were either known poisons or discovered to be poisons only after centuries of use. Mercury as miracle cure, anyone?

Another fact that I found fun was that bismuth was long thought to be the largest stable nucleus. It has since been discovered to be very slightly unstable, that is, radioactive. However, its half-life is thousands of times the most generous estimate of the age of the universe, so it can be treated as stable by us mortals.

Kean also brings out an important historical fact. The history of chemistry is full of amazing women, some of whom are well known, and far more who never entered the public consciousness. Madame Curie is perhaps the best known female scientist of all time, and her body of work was impressive. However, there were many more who contributed, often by noticing what was overlooked by their colleagues.

Overall, this was a fun book to read, best approached as a collection of amusing and enlightening anecdotes that remind us of the fascination our world holds for us.
Posted by Diary of an Autodidact at 8:34 PM