Source of book: I own the major works of Robert Browning. 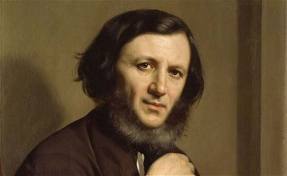 This work straddles the line between poetry and drama, being written primarily in poetry, but with prose dialogue mixed in. Although it is ostensibly a drama, the action and dialogue are similar to Browning’s “dramatic monologues,” and thus read much like poetry during those passages. In addition to these mixed elements, the nature of the material itself seems far removed from the usual dramatic narrative arc. I would think that the work would be best approached as a series of four vignettes united by a common character and turning point.

Robert Browning was one of the big three Victorian poets, along with Tennyson and Matthew Arnold. He wrote a tremendous quantity of poetry, most of which is generally respected today, but little read. This may well be connected with the general decline of the popularity of poetry, which I have previously lamented. It also might be that Browning’s works tend to be longer, and thus require an attention span that seems to be largely absent in our modern times. Many of us have at least read My Last Duchess, or The Pied Piper of Hamlin, but little if anything else. (I intend to read the Pied Piper to my kids one of these days - it really is a marvelous bit of poetry quite apart from the great story.) Browning was also known as the husband of Elizabeth Barrett Browning, whose Sonnets from the Portuguese I read and reviewed previously.

Pippa Passes would actually make an interesting play on stage. It is divided into four acts, entitled Morning, Noon, Evening, and Night, with a brief prologue. The titular character is a young textile worker. The day of the play is New Year’s Day, the only day of the year that Pippa gets a vacation. She describes the day ahead of her in the prologue, and her thoughts close the end of the play. In between, her voice is heard singing as she goes on her way, followed by the stage direction, “Pippa passes.” The episodes involve persons who are reminded of a moral order by Pippa’s songs, and change the course of their action accordingly.

I first heard of this play as part of my high school curriculum. We read only the first of Pippa’s songs, the laughably naive lyric that goes as follows:


The year’s at the spring,
And day’s at the morn;
Morning’s at seven;
The hill-side’s dew-pearled;
The lark’s on the wing;
The snail’s on the thorn;
God’s in His heaven—
All’s right with the world!

In the context of the play, these lines take on a deeply ironic texture: it is morning, and Ottima, the owner of the silk mill that employs Pippa, is discussing with her lover Sebald the fact that they have murdered Ottima’s senile husband Luca. Pippa’s innocent lines cause a pang of conscience, and the lovers part. Browning’s language is ambiguous as to whether they simply reject each other, or commit suicide.

The second episode revolves around the artist Jules, who has been tricked into marrying Phene, a young woman who has been put up to writing him fan letters by her scheming mother and some practical-joking students. Pippa’s song inspires him to look on her with real love, and the two scheme to make a happy life together.

I love how the students describe Jules:


He was violently in love with himself, and had a fair prospect of thriving in his suit, so unmolested was it, - when suddenly a woman falls in love with him, too; and out of pure jealousy, he takes himself off to Trieste, immortal poem and all...

The third episode involves a conspiracy to assassinate a corrupt Austrain official. (The action takes place in Italy.) It is unclear after Pippa’s song - which inspires conspirator Luigi to flee for Vienna - whether he has abandoned his deadly plans.

The final episode reveals that Pippa is actually the true heir of the Monsignor, who is being blackmailed by the assassin he hired to ensure that his brothers were “taken care of,” one way or another. The Monsignor hears Pippa’s song, and determines to do right by Pippa, despite his past bad behavior.

It took a few times through a few passages to determine exactly what Browning was saying - he does tend to be poetically vague. Thus, it is necessary to pay close attention and read a bit into the words to figure out the action. That said, the scenes are delightfully dramatic, and emotionally true.

I loved the rogue Bluphocks’ rhymed summaries of Bible stories. For example:


“How Moses houspocussed
Egypt’s land with fly and locust.”


“How to Jonah sounded harshish,
Get thee up and go to Tarshish.”


“How the angel meeting Balaam,
Straight his ass returned as salaam.”

Another interesting and thought provoking line was given by Luigi’s mother.


Then, evil is in its nature loud, while good
Is silent...


Well, you shall go. Yet seems this patriotism
The easiest virtue for a selfish man
To acquire: he loves himself - and next, the world -
If he must love beyond, - but naught midway
As a short-sighted man sees naught midway
His body and the sun above.

The best part of the play, to me, however, was the beautiful opening lines describing the break of day.


Faster and more fast, O'er night's brim, day boils at last ; Boils, pure gold, o'er the cloud-cup's brim Where spurting and supprest it lay For not a froth-flake touched the rim Of yonder gap in the solid gray Of the eastern cloud, an hour away ; But forth one wavelet, then another, curled, Till the whole sunrise, not to be supprest, Rose, reddened, and its seething breast Flickered in bounds, grew gold, then overflowed the world.