Reading with my Kids: Mythology

The kids and I have spent some time over the last year or so reading through a variety of classic myths, from King Arthur to The Odyssey. Our most recent selection was the Arabian Nights, which gave me the impetus to write a post about our reading. (I don’t blog about everything I read with the kids - just the ones that seem like they would make an interesting blog post.)

When reading about the past, it is easy to forget that a certain amount of background knowledge is required. When reading with kids, it is impossible to forget. I found that I had to do a lot of explaining about ancient culture - particularly about the completely different status that women had in these stories. The Arabian Nights really brought this home: powerful men simply had women killed at their bidding. Women were given in marriage without any expectation that they had a say in the proceedings. (Although the story of the Prince and the Princess was an interesting counterpoint.) This assumption was present likewise in the Greek mythology and in the Arthurian legend - although to a milder extent.

On the other hand, the myths are part of the fabric of Western culture, and we reference them constantly, whether or not we ever read the originals. For example, what child does not know “Open Sesame”? Or what about the Holy Grail? Many of us would think of Indiana Jones. A few music nerds like myself might think of Richard Wagner. But the Arthurian legends explain so much more. For that matter, it is almost impossible to read any serious writing of the past 400 years without a reference to Homer. This is basic cultural literacy.

It is also great fun. What child (or grown-up child like me) could resist stories of heroism, hubris, treachery, victory, defeat, sorrow, fantastic monsters, powerful and mysterious magic? Who could fail to cheer on Gareth as he proves himself to the caustic Lynette? Who wouldn’t identify with Telemachus, who struggles to grow up under circumstances too great for him - and then feel the thrill as Odysseus realizes that his son has become a man? Who doesn’t thrill at Scheherazade as she overcomes her lack of power by using her superior intellect and imagination? These are all the stories of overcoming hardship and overwhelming odds. Of seeking to bring justice and right to the world, and of banishing evil. Of growing up.

Needless to say, the kids loved these works, and made sure that we read them together whenever we had the opportunity.

For King Arthur and The Odyssey, we used adaptations for children found in The Junior Classics, a ten volume set printed in the 1950s. I assume my mom found these at a thrift store like many of our older books. (I certainly got my discount shopping and my love for classic literature from her.) There were some good and bad things about the adaptations. They were generally age appropriate, but there were times when the language was a bit outdated. For example, the characters often use “King James English” when addressing each other or deities. (Thees and thous...) I had to stop and explain quite a few words at first, until they got the flow of things. The one unforgivable thing - for me - was the inexplicable omission of one of my favorite scenes from The Odyssey. When Odysseus returns in disguise to his home, along with Telemachus, he suggests a contest with the no-good suitors wasting his property and trying to seduce his wife. The  contest is one of archery, with one catch: they must use Odysseus’ own bow, which must first be strung. The suitors all try in turn and fail. Finally, Telemachus tries, and is about to succeed. Odysseus shoots him a glance, and Telemachus pretends to fail as well. This is my favorite moment, because the father and son make an important connection. Odysseus realizes with admiration that his son has become worthy, and Telemachus knows with that glance that his father sees and approves, but both recognize that this isn’t really Telemachus’ fight. Odysseus must avenge himself, but they know that the baton will soon pass. I told the kids my own version of this story so they wouldn’t miss out. We also read a little of the opening of the Robert Fitzgerald poetic translation so they could get a feel for the language - and “rosy fingered dawn.”


The Merchant and the Genie
The Fisherman and the Genie
The Greek King and the Physician Douban
Aladdin, or the Wonderful Lamp
The Enchanted Horse
Codadad and his Brothers
Abou Hassan, or the Sleeper Awakened
Ali Baba and the Forty Thieves
Prince Ahmed and the Fairy Perie Banou
The Three Sisters
Sinbad the Sailor
The Husband and the Parrot
The Vizir who was Punished
The Young King of the Black Isles
The Little Hunchback
The Prince and the Princess
The Caliph of Baghdad
The Blind Ali-Abdalla
The Merchant of Baghdad

The kids particularly loved the genii and other fantastic creatures in the Arabian Nights. There is so much exotic sparkle, unexpected developments, and magic items that it is no wonder that these stories have entertained for centuries.

I noted the position of women above, but I was also reminded of the way that the Arabian Nights also subverts the society of that time. The slave girl Morgiana from Ali Baba and the Forty Thieves, who saves his neck multiple times, and thereby earns her freedom and the hand of Ali Baba’s son. The fairy Perie Banou, beautiful and powerful, who deigns to marry Prince Ali. The Princess Badoura, who boldly impersonates her husband when he goes missing, and rules an island wisely until he returns. And, of course, Scheherazade herself. She boldly offers herself up to what seems certain death in exchange for a chance to save the lives of the women of the kingdom. Like Queen Esther, she says, “and if I die, I die.” She then uses the tools she has to work a miracle. 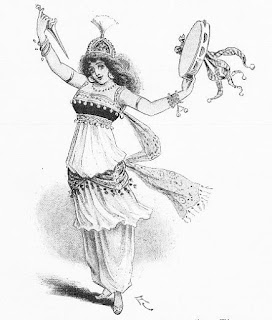 Scheherazade is also dear to my heart for a musical reason. Rimsky-Korsakov wrote a tone poem based on the Arabian Nights named after her. The voice of Scheherazade is represented by a solo violin, playing a sinuous melody as her words make the stories come alive through music. Although I would love this music no matter what, I am particularly thrilled at the chance I had during my college days to play the solo part with the Bakersfield College Orchestra. Every time I hear that melody, I still feel the passion and beauty that it brings.


This is just the first part - and they are all worth the listen. Better yet, go buy the whole thing. I like Eugene Ormandy and the Philadelphia Orchestra’s recording.


Posted by Diary of an Autodidact at 8:28 PM

Email ThisBlogThis!Share to TwitterShare to FacebookShare to Pinterest
Labels: mythology, Reading With my Kids