I already discussed Patrick O’Brian in my review of the previous book in the Aubrey-Maturin series, The Letter of Marque. If you are unfamiliar with either the author or the characters, I strongly recommend reading the earlier review.

This book picks up the story after Captain Aubrey’s smashing (literally!) success in commanding his own privateer. Alas, this is small consolation to Aubrey, who lost his commission in the Royal Navy after being set up in a stock fraud scheme by his political enemies.

At the outset of this book, Aubrey and Maturin set off on another mission connected with Maturin’s secret work as a spy, when a new development in Indonesia presents itself. Since an official naval ship is needed to deliver the envoy so he can attempt to negotiate an important treaty before the hated French can do so, the powers that be decide to reinstate Aubrey to his command. This is Aubrey’s dream, of course, but he does regret that he must leave his beloved Surprise, the frigate that has long been his favorite ship.

As I noted before, there are twenty completed books in the series, with one left unfinished at O’Brian’s death. This book is number thirteen, and the books form a continuous narrative. Thus, this book ends right in the middle of the story, like many of the others. I will have to keep reading to figure out how this adventure ends.

This particular book has far less actual battle action than the previous book. No two books are exactly alike, but this one particularly focuses on the cloak and dagger stuff, plus some interesting diplomatic maneuvering. The fact that O’Brian makes these events exciting is a testament to his skill. O’Brian, like C. S. Forester before him, used the actual events in British Naval history for his plots, so he generally works with what he has, filling in the details as necessary, and using his own characters.

I must admit, the particular plot in this one is interesting, in light of both The Arabian Nights, which I am reading with my kids at present, and the vagaries of diplomacy in our present time. As it has been throughout history, the details of the treaty are merely a part of the whole. Who knows whom - and particularly who is sleeping with whom - is equally important to the negotiation. In this particular case, the potentate in question is batting for the other team with an important (and highly attractive) advisor, who is also getting some on the side with one of the French diplomats. (As I noted before, the only graphic sex in the series occurs in Maturin’s description of insect nookie in his scientific journals.)

A few things about this book deserve mention. First, I particularly enjoyed the many descriptions and mentions of flora and fauna. Maturin is an amateur naturalist (as all naturalists were in that time - Sir Joseph Banks preeminent among them), and the book dwells at length on several of his excursions. Whether it is his hike to a remote decayed volcanic crater to see the orangutan, or his dissection with a fellow naturalist of a tapir, or his capture of a Sago Pedo, a particularly cool insect. (A large, predatory Katydid native to Spain, to be precise.) 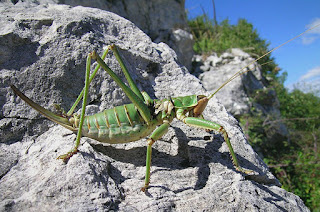 Second, there are O’Brian’s typically excellent characterizations. In particular, I would mention Preserved Killick, Aubrey’s steward. Killick is not only Aubrey’s valet on board, but also is responsible for entertaining dignitaries and generally supervising the hospitality of the vessel. Sallow, cranky, and sarcastic, he really is one of the delightful long-term characters.

I also liked the portrayal of the diplomat, Mr. Fox. He is far too concerned about receiving the respect and accolades he thinks he deserves.


Fox...occupied a more or less perpetual stage, playing the role of an important figure, an imposing man, and the possessor of uncommon parts. To be sure, he was at least to some extent all three; but he would rarely let it alone - he wished it to be acknowledged. There was nothing coarsely obvious or histrionic about this performance; he never, in the lower deck phrase, topped it the knob. Stephen [Maturin] thought the performance was by now almost wholly unconscious; but in a long voyage its continuity made it plain, and on occasion the envoy’s reaction to a real or imaginary want of respect made it plainer still. Fox did not seek popularity, though he could be good company when he chose and he liked being liked; what he desired was superiority and the respect due to superiority, and for a man of his intelligence he did set about it with a surprising lack of skill. Many people, above all the foremast-hands of the Diane, refused to be impressed.

I will admit that I know a few people like this - a few judges included. It is not only the self-important that O’Brian skewers. He also has some cutting remarks for the “stuffed shirts” that occupy a certain level of government service:


Dinner was less agreeable, however. Before it Fox introduced him [Maturin] to three high officials who were to join the mission, almost caricatures of their kind, tall, red, thick, arrogant, with booming voices and an inexhaustible store of platitudes.

Even Fox cannot abide these dullards, but considers them necessary to counterbalance the French contingent.


“We have to produce a show at least equal to what the French can offer...and these people the Governor has lent me are used to missions of this kind: they can stand there in their gold-laced uniforms for hours without suffering; they can give the appearance of listening to speeches; they never have to steal away to the privy; and at banquets they are capable of eating anything from human flesh downwards. But I admit that their company is a trial.”

This reminded me of a certain Dilbert comic strip. Apparently some things never change.

As Maturin observes (regarding a character in a previous book), in this line of work, “truth” is often what one can make others believe.


“What I meant was that if he could induce others to believe what he said, then for him the statement acquired some degree of truth, a reflection of their belief that it was true; and this reflected truth might grow stronger with time and repetition until it became conviction, indistinguishable from ordinary factual truth, or very nearly so.”


A few other interesting mentions were the prevalence of syphilis, which we tend to forget these days; and the durian, a favorite fruit of a few of my friends. (Some day I’ll try this. We found dragon fruit here locally this year. Will durian be next?)

As a final note, I was once again shocked at how O’Brian used his unique pacing to let the death of a major villain sneak up on the reader. Just as in a previous book when Captain Harte, Jack Aubrey’s nemesis, is blown up with his ship with no warning whatsoever; Andrew Wray, the traitor who has done his best to get Maturin killed just shows up suddenly as a corpse, a victim of an assassination when his intrigue fails. While many, perhaps most authors like to build gradually to a stunning climax, O’Brian often sneaks major events in with a bland sentence or two, leaving the reader gasping for breath as he or she realizes that something astounding or terrible just occurred without any sort of advance preparation. I think O’Brian was on to something, though. Sometimes we lose a loved one after a long illness, so we are prepared. Sometimes, though, death and destruction strike without warning. I remember hearing more than once that someone I once knew had died, out of the blue, and it can be a sobering experience. Just this last year, a relatively young colleague simply didn’t wake up one morning. One day, she was there, and the next not. In war, this is a “normal” experience, much more so than in our everyday lives.


Maturin, of course, gets the ironic pleasure, or whatever ambiguous emotion he felt, of dissecting his arch-nemesis (for scientific purposes - his friend is collecting spleens), and disposing of the rest of the body discretely (for patriotic purposes - he is a British agent, after all). In his characteristic phlegmatic way, he does what he must, but I must admit this particular passage is disconcerting in the extreme, and O’Brian’s matter-of-fact writing heightens the sensation.


As I noted in my earlier review, I think that this series represents some of the best modern historical fiction. The characterization is excellent, and the writing is both modern and sophisticated while remaining of the time of its setting. And, O’Brian doesn’t feel the need to preach, but simply tells his tale, relying on the astute reader to draw his or her own conclusions.

Posted by Diary of an Autodidact at 10:41 PM