Source of Book: I own this

I am reading this book in several parts, due to its long length and the difficulty of the language. Most of the short plays in the sections that I read for this installment are in Middle English. I am not exactly unfamiliar with Middle English, but I am not fluent either, so the reading takes time and thought. This collection was published in 1924, edited by Joseph Quincy Adams.

The history of English drama dates back to the Middle Ages, at which time it was primarily associated with religious themes. Indeed, this book starts with miniature dramas that were inserted into the Easter church services, demonstrating the Resurrection. Included are four different versions of the Sepulchrum dramas, showing an evolution from a minimal call and response lasting perhaps a minute, to a complete acting out of the scene at the empty tomb taken from the Gospels. In the first version, dating from around the Ninth Century, two small groups perform the drama. “Whom seek ye in the sepulchre, O followers of Christ?” and so forth. By the time of the last, from the Thirteenth Century, there are many individual roles, and costumes and sets have appeared as well.

Also included from this time period are plays about the appearances of Christ after the Resurrection, the visit of the magi, the shepherds, Herod’s slaughter of the innocents, and the prophecies about the birth of Christ. All of these plays are in Latin, as was the rest of the church service. Presumably, the acting itself aided comprehension since few if any laymen could understand the words.

Also notable was the fact that all parts, male and female, were acted by men and boys - a tradition that carried to the days of Shakespeare and beyond.

I also was a bit startled to find casual anti-semitism throughout the early plays. Particularly in those from the Thirteenth Century, there are gratuitous slurs, which were readily accepted in that time, but are uncomfortable to modern ears. For example, after lamenting Christ’s death, one of the “Three Marys” says, “Alas, vile race of Jews, whom a dire madness makes frenzied! Detestable people!”

This is anachronistic as well, as all the characters (except for the Roman soldiers) are Jews - as is Christ. One tends to forget that the history of Europe in the last 1000 years is a history of anti-semitism. Even such a revolutionary as Martin Luther wrote screeds against the Jews, and suggested that they be exterminated by pogroms. Just as slavery was commonly accepted in the United States 200 years ago, hatred of the Jews was an accepted fact of life for centuries. In that sense, Hitler was not so much an anomaly as unusually successful in carrying out the popular will.

Although these earliest plays were anonymous, several of the plays written and performed about that time are attributed to Hilarius, who is believed to have been an Englishman, although he spent some of his career in France. (It occurs to me that Hilarius should have written comedy, had he lived in a later age. His name, at least, would have been perfect.) Hilarius is the likely author of the play about the conversion of St. Paul, along with three dramas telling of different incidents in the life of St. Nicholas.

After this time, the Latin gave way to the vernacular - that is, the language spoken by the people. In England, this was the Middle English of Chaucer and his contemporaries. Three plays from the early period are included: the usual empty tomb, Christ after his resurrection, and the shepherds. This is where the reading became more difficult. My experience in Middle English is limited to some Chaucer and the extensive quotations in C. S. Lewis’ book on Medieval romances, The Allegory of Love. Thus, I had to re-learn some of the words, and pronounce everything in my head so as to hear beyond the archaic and inconsistent spelling.

The final section that I read in this book is that of the Craft Cycles. Eventually, drama moved out of the church and into the streets, with rolling wagons with a two-tiered stage, called a “pageant,” moving from town to town and performing a complete cycle of Biblical stories, from the fall of Lucifer to Judgment day. There are a total of nineteen cycle plays in this book, although the complete cycle contained about a dozen more. The editor selected the best of the plays, from several sources. I loved the names of the guilds that wrote and performed these plays: The Grocers of Norwich, The Glovers of Wakefield, The Waterleaders and Drawers in Dye of Chester, The Tile Thatchers of York, The Shearmen and Taylors of Coventry. Others reference the towns of performance: acted at N. Towne, or at Wakefield. One pictures something similar to Community Theater. Those of the community with a dramatic bent getting together to act out the familiar stories for an enthusiastic and occasionally irreverent audience. 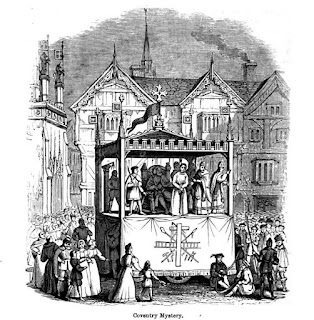 A pagaent wagon. The "roof" portion would be used for God and other heavenly characters.

Signs of the plebeian audience for the plays can be found in the frequent episodes of low comedy inserted into the text. For example, in the story of Noah, his wife is portrayed as a shrew, needing a good beating now and again - and giving one to Noah in return.


NOAH: I shall make the still as stone, bhynnar of blunder!
I shall bete the, bak and bone, and breke all in sonder.


NOAH: Se how she ca grone and I lie under!
Bot, wife, in this haste let us ho,
For my bak is nere in two.


WIFE: And I am bet so blo that I may not thryfe.

And so forth, throughout the play. Also, in the story of the announcement of the birth of Christ to the shepherds, there is an extended story about a no-good sheep-stealing character and his attempts to disguise the stolen lamb as a newborn baby. Various incidents like this appear in the plays, much like Shakespeare’s addition of characters like Falstaff into otherwise serious historical plays.

Another odd anachronism that appears in these plays is the fact that all of the villains, from Pharaoh to Herod, pray to “Mahound,” known to us as Mohammed. Since Mohammed probably lived around 600 years after the birth of Christ, this is wildly inaccurate, of course. It is, however, common in works of the era, when historical knowledge, to say nothing of accuracy, was considered rather unimportant. Thus, the “Jews” were a foreign group, different from Christ and his disciples; the setting of the stories is sometimes clearly meant to be English locations; and all the villains worship Allah.

On the other hand, some sources of humor are apparently timeless. When Balaam is hired by King Balak to curse the Israelites (remember the talking donkey?), he becomes incensed by Balaam’s inability to carry out his orders. After Balaam ends up blessing Israel, Balak explodes.


BALAK: What the devilles eyles the, poplart? Thy speach is not worth a fart!

Despite the occasional displays of ignorance and low-brow humor, the Craft Cycle plays are extraordinary for their use of scripture. In an era when few could read English, let alone the Latin Vulgate, these plays are filled with direct quotations and the letter, not just the spirit, of the original. Once Wycliffe translated part of the New Testament in the Fourteenth Century, the scriptures began to be available to the most wealthy of the educated classes. It was not until the work of Tyndale and the Geneva Bible which was primarily his work was printed in the early 1500s that the average person could own and read an English Bible. Thus, these plays were remarkable for their role in bringing the Biblical stories to the masses, disguised, perhaps, as entertainment.

Taken as a whole, this first part of the collection has been an enlightening tour of Medieval drama. I look forward to the next installment, which includes the Morality Plays, and the early farces.

An interesting look at the 2010 production of the Mystery Plays in York.
Posted by Diary of an Autodidact at 10:32 PM