The American Way of Eating by Tracie McMillan

After reading this book, I have come to the conclusion that every middle-class person would benefit from reading it. Its perspective will be particularly helpful for those of us who grew up in a household with a single wage earner, and who therefore take for granted that there is always adequate time and money available for the preparation of wholesome, fresh food.

McMillan is roughly my age, and worked as a reporter prior to experiences in this book. Over the course of a year, she worked undercover in three areas of the food production chain. She spent time as a farm worker in California, worked in the produce department of a Wal-Mart in Detroit, and prepared food at an Applebee’s in New York. She allowed herself about a month’s expenses to start, but lived off of her earnings during the duration.

While I cannot vouch for the accuracy of the other sections (which I have no reason to doubt), I can confirm that the author’s experience as a farm worker was true to life. I have a few friends and acquaintances, personal and professional, who have worked the fields here in Kern County, and around the state. California’s central valley is one of the most fertile places on the earth, and currently produces a significant portion of the produce consumed in the United States. A mere half of a mile from my house are almond orchards, with fields containing all kinds of annual crops just beyond. It is easy enough to observe the process of growing food. All of these have confirmed to me that McMillan paints an accurate picture of modern farm labor. Certainly it is true that much of the hard work is done by illegal (or undocumented - use your preferred word here) immigrants, and that actual pay is typically far below minimum wage. The author’s description of the use of labor contractors and faked hour counts is all too familiar to those who have worked the fields - and I might add, to those who contract for the labor. It is just the way business is done. I also note that the author gained access to the field labor system through the assistance of California Rural Legal Assistance, a sister organization to my first employer as an attorney. They are on the front lines of poverty and field labor in the central valley, and would be where I would start in a similar endeavor.

The second section, on the retail side of food, is interesting for different reasons. Here, employees tend to be longer term, and typically do make the wages promised. For anyone who is unfamiliar with the incredible logistics necessary to our modern food distribution system, this book will be fascinating. Since food is no longer grown near where it is consumed, the infrastructure needed is amazing. I don’t share the author’s innate distrust of large scale production, so I found all this to be more inspiring than fear-inducing.

I also found it disappointing that the author, like most of those in the press, betrays a visceral dislike of Wal-Mart. While some of this may be related to its size (Wal-Mart is the largest private employer in the United States) or its resistance to labor unions, I think the real reason is one of classism. After all, Costco is largely non-union (a few Price Club stores were unionized before being bought out by Costco), and is similarly ruthless on its suppliers. Apple is a darling of the left, despite having the highest profits of any company in the history of the world. It too is non-union. Whole Foods likewise is aggressively non-union: its CEO is libertarian. And the list goes on. However, Wal-Mart is a lower class establishment, catering to the poor. In fact, complaints about Wal-Mart, in my experience, can be boiled down to a distaste for its clientele. Everything one can say that is bad about Wal-Mart applies equally to any number of other soulless corporations. I am not intending to make a claim that Wal-Mart is marvelous or anything. However, the author does note that it provides jobs which are in huge demand. She even lists some of the benefits her co-workers cite as reasons to prefer their jobs, such as internal promotions and decent benefits.

One conclusion I did draw from this book is that the State of Michigan is completely insane. As of the writing of this book (published just this year), it was still requiring that price stickers be placed on every single item. In addition to being archaic, the extra work is brutal on employees, leading to a high incidence of repetitive stress injuries. One wonders if a price sticker manufacturer made a large campaign contribution.

The final section is likewise fascinating for its inside view of a chain restaurant. Here, as in retail, logistics are everything. Food isn’t so much cooked, as assembled from pre-made ingredients. The supply chain is both inspiring and soulless, and the results somewhat unappetizing. I’m not a fan of Applebee's anyway, and prefer hole-in-the-wall restaurants with possibly questionable health department scores. Also, I am a pretty decent cook, so I sympathize with the line chefs who dream of fresh ingredients chopped in the kitchen.

Running through the book are the collateral experiences of the author as she lives like those she works with. She finds housing, usually with others (minimum wage will not get you a separate apartment), and shares their lives. She acknowledges that she meets a great many decent, kind, and generous people - and makes them come to life with her writing. She also realizes that she lacks the basic skills to cook for herself consistently.

This is really the most crucial part of the book, in my opinion. I tend to take for granted the fact that my wife and I can plan and cook meals with relative ease. We have an income sufficient that we do not have to pinch every food penny, and have a well-stocked pantry. Even more important, however, we grew up knowing how to cook. Unfortunately, this skill has been lost to many. In our own families, this seems to have occurred in the 1950s, when processed food took center stage, and some assumed that we would simply microwave everything in the future. (Not too far from the truth, actually.) While our parents reclaimed this skill, many did not. With less time to learn and teach, the skill has died out - particularly in lower class families where both parents need to work in order to survive. The author points out that it really does not take more time to prepare food from scratch than from processed ingredients, but that it requires knowledge and confidence.

I also thought that the chart the author made showing her total income and the percentage spent on food during each of the three parts was enlightening. Also, her realization that even poor people want good food was both obvious (to those of us who grew up in poor neighborhoods) and revolutionary.

Both liberals and conservatives will disagree with some of the author’s suggestions. Indeed, it is difficult to avoid giving a simplistic answer if one expects to sell one’s book to a publisher. I think the author admits that the answers are not simple, however, and that it will take changes in many interrelated areas of life to improve the American diet. I also felt that, despite some overheated criticism from certain conservatives, McMillan really did her best to keep things objective, and acknowledge her biases. Plus, she actually lived what she wrote about. This wasn’t some ivory tower perspective from someone who never experienced the “real world.” I also appreciated that the author treated all those who she wrote about with respect and humanity. As a good reporter should, she never reduced people to stereotypes and refused to view herself as inherently superior. I would also commend her for excellent writing style, which added to the experience, rather than distracting from the content.


Thus, this book left me with more questions than answers. It is so easy to simply find a scapegoat, whether the lower classes and their “bad taste” or big agriculture for making processed foods a central part of the diet. A real solution would require changes in all these areas, and more.

So read this book. You will probably lose a little middle class smugness, learn a few things about how logistics and infrastructure work, and look at the food on your plate a bit differently. 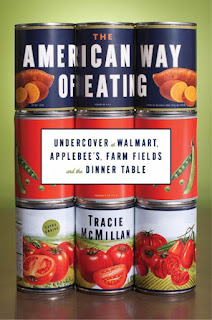 I love the cover art for this book.

Posted by Diary of an Autodidact at 10:00 PM