Reading With my Kids: The Phantom Tollbooth

Source of book: I own it. 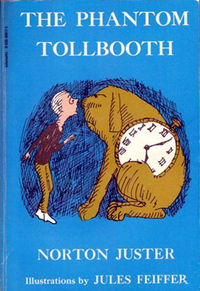 What if “jumping to conclusions” was more than an idiom? What if you actually jumped, and found yourself on an island named “conclusions”? These and other phrases are interpreted delightfully literally in this children’s classic by Norton Juster.

Written in 1961, and inspired by Lewis Carroll and the Marx Brothers, it is a modern fairy tale filled with puns and unexpected developments. I remember my mother reading this to me the first time, when I was fairly young. I’m sure some of the figures of speech had to be explained to me then, but I still found it hilarious. I re-read it several times, as a child, as a teen, and even as an adult. It really is one of those books that can appeal to any age – assuming of course that the reader has not been robbed of his sense of humor or sense of wonder by the Senses Taker. See, I cannot resist making a reference to the story even now.

Since the plot is part of the fun, I will avoid spoilers. Milo is a chronically bored boy, who thinks nothing is worth doing, nothing is worth thinking, and nothing is really important. He comes home from his boring day at school to find a tollbooth in his room. He jumps in his toy car and sets out – he has nothing better to do anyway. He meets a host of odd characters, finds a quest, and sees it to its end.

My kids are (currently) 8, 7, 6, 3, and 1. Obviously, the younger two have a limited understanding. They are at the “listen to Daddy read” stage, however, so they get to sit in whenever they wish. The older ones are clearly able to grasp much of the humor. They were particularly fond of King Azaz’s advisers, who say everything in five different, largely redundant ways.

“Do all of those words mean the same thing?” gasped Milo.
“Of course.”
“Certainly.”
“Precisely.”
“Exactly”
“Yes,” they replied in order.

They also liked the Everpresent Wordsnatcher, a dirty bird who comes from Context, but is never there.

“Let me try once more," Milo said in an effort to explain. "In other words --"
"You mean you have other words?" cried the bird happily. "Well, by all means, use them. You're certainly not doing very well with the ones you have now.”

There is much more, of course, which makes this book one rewarding for both parents and children. I therefore recommend that you not let your children read this one on their own. Far better to share it than let the kids have all the fun.

Update April 2020: I read this one to the two younger kids now that they are old enough, and it was a hit. My 11 year old particularly got the wordplay and puns and humor, and laughed all through it. My 9 year old had to have a few things explained, but she had fun as well. This is still one of my all time favorite kids' books, and it has aged well. The ideas of rhyme and reason ruling our world, knowledge and wisdom prevailing over ignorance and prejudice, and the necessity of seeing things from others' points of view are timeless - and particularly timely in our current era of aggressive and intentional ignorance, disdain of knowledge and expertise, and celebration of bigotry.

Posted by Diary of an Autodidact at 8:55 PM