Source of book: I own this
Date originally posted on Facebook: May 20, 2010

One of the gaps in my knowledge of reading is that I never read Henry James. This was particularly odd given that I am a big fan of James Thurber, who in turn spoke highly of Henry James.

At a recent library sale, Amanda found for me a Franklin Library edition, for a few bucks. Sadly, like so many used books, the pages had never been turned.

For some reason, James has a reputation as difficult reading. I found him to be similar to other Victorian or Edwardian authors, particularly those from England. Indeed, James could be considered almost English despite his American birth. He spent a considerable portion of his life living in England, and even went so far as to become a citizen in protest against the United States’ refusal to enter World War I.

This particular collection has two well known novellas, along with 6 additional novellas and stories. The distinction between the two is not always clear, as all have some form of chapter division, but none is long enough to qualify as a true novel. Even the long forms have a feeling of being an extended short story, dealing with one particular issue or conflict.

This particular collection presents the stories in the order they were written.

The Last of the Valerii

This story introduces one of James’ favorite scenarios: the romance between wealthy American young woman and a European aristocrat. This relationship is typically characterized by a naïve, innocent American contrasted with the more sophisticated, worldly European. This particular story is told from the point of view of an older relative of the girl in question. I won’t spoil the plot, but it involves a buried statue of a Roman goddess.

This early novella was probably the first attempt by James at a longer form. It too deals with a marriage of a naïve American woman and, in this case, a French nobleman. Raised in France, Madame de Mauves harbors a fantasy that the most noble, good man would be found only in the person of noble descent. She is wooed by the older brother of her school friend. He is deeply in debt, and of legendarily bad character. They marry, and eventually she becomes fully aware of his philandering. He also ignores her, seemingly uninterested in her beauty and intelligence.
At that point, she is introduced by a friend to an American also living in France, from whose point of view the story is written. He is the early archetype of another standard James character: the weak willed man, who is unable to rouse himself to action, or to fully live life.
What makes this story fascinating is that it appears to follow a predictable plot arc, except that the woman in this case has the backbone, and neither man does.

Another short story in which a young American girl’s naivety and infatuation with Europe leads to a tragic end. The young schoolteacher dreams of visiting Europe. When she is finally able to scrape together the money to go, she promptly falls victim to a distant relative living in France. She pities him for his alleged debts, and gives him all her traveling money, and has to return without really seeing anything. To add to the tragedy, the relative’s wife is soon widowed, and comes to the United States to further sponge off the schoolteacher.

One of the better known novellas. A young American man traveling in Switzerland meets Daisy, a young American woman traveling with her family, at a resort. Does this sound familiar yet? They become interested in each other, but her naïve flirtatious ways alienate her from the more respectable element.
She eventually ends up in a romantic relationship with an Italian of “sophisticated” but dubious character. This ends badly.
Although this novella is mentioned more often, I found Madame de Mauves to be a more nuanced tale. Daisy Miller does have the distinction of using malaria, rather than tuberculosis, as a plot device.

Ah, this short story is of interest to the family law attorney. Colonel Chart is widowed, with two adult children, and a few younger ones that do not figure in the story.
The story is told from the point of view of the daughter, Adela, who has probably felt the loss of her mother the most.
Colonel Chart becomes engaged to a person whom Adela dislikes heartily. Adela takes matters into her own hands, doing her best to torpedo the relationship. While she succeeds, subsequent events cause her to repent of her actions. In its 30 short pages, it gives a snapshot familiar to anyone who has attempted to navigate stepparent relationships.

The Turn of the Screw

Is this a ghost story, or a story of insanity? The question has occupied English majors for over a century. James evokes a delicious Gothic atmosphere, similar in a way to the Bronte sisters.
This story is from James’ middle period. The language has become more challenging, with sentences strung out for whole paragraphs. Still, the structure fits the narrative, causing the reader to sift through the words looking for clues.
I particularly enjoyed the way he kept almost revealing facts, giving hints, but never coming to a full reveal, until at the end, you realize he is never going to give you that missing piece allowing you to understand. Instead, you must simply feel. Then you are left to wonder whether it was all in the protagonist’s head.
I am informed that the film, The Others, was inspired by this novella. The plots are obviously different, but they share the ability to wring shivers out of the most mundane events.

Thus short story inverts the usual American Girl/European Nobleman plot in that the tragedy falls on the man, not the woman. Miss Gunton comes close to marrying an Italian nobleman, but insists that his mother take the first step of initiating this relationship. This is contrary to European tradition, leading to a standoff.

The Beast in the Jungle

This final short story is from the last period of James’ writing. By this time, the prose had become dense and more challenging than ever.
The protagonist meets a woman he met ten years prior. She recalls to his attention that he had disclosed to her a great secret at that time, and she had never forgotten it.
The secret is that he has a premonition that something unusual and terrible will someday happen to him. This is the “Beast in the Jungle” that will someday jump out at him.
They commence a friendship. He determines never to marry, because he could not risk bringing a woman into his terrible destiny. This continues for years. They grow old, and she eventually becomes ill and dies.
Before her death, she tries to get him to see what he cannot see. He is finally enlightened when he sees another in the throes of true grief: he has failed to love.
It is easy to see this story as autobiographical. James never had a serious relationship with a woman. Indeed, there is nothing to indicate an intimate relationship with a woman or a man. He rejected any notion of marriage, and considered himself a confirmed bachelor from a young age.
To what extent James was revealing his own feelings in this story is a matter of speculation, but it is nonetheless a powerful vision of loveless selfishness finding its inevitable result. 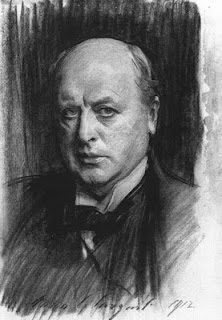 Henry James, in a 1913 charcoal sketch by John Singer Sargent.
Posted by Diary of an Autodidact at 11:57 AM