The Restaurant at the End of the Universe by Douglas Adams

We listened to the audiobook read by Martin Freeman - which was really good. 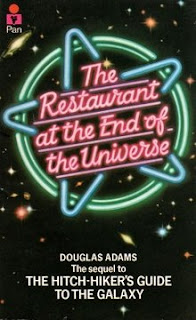 I first read the first Hitchhikers book when I was pretty young. Young enough to be mildly scandalized by the references to sex. But I thought it was hilarious even then, and proceeded to read all of them for the first time during my teens. I re-read them at least once thereafter, but it has been a while.

As a general rule, books change as you grow and age. A book has one vibe during one’s childhood, another as a teen, another as a young adult, and another as a middle aged sort. And I am speaking purely of how the reader changes. Other times, the historical moment itself is radically different, giving an entirely different meaning to the text.

This latter phenomenon is what I experienced this time through The Restaurant at the End of the Universe. The first book is pretty good, admittedly, and has so many good quotable lines that it sticks with one. I also remember that the third book (Life, the Universe, and Everything) was my favorite - probably because of the concept of the Somebody Else’s Problem Field - which I actually used in a case once. (The judge laughed…) But I didn’t really remember that much about the second book.

Reading/listening to it now, however, I realize that it expanded on the political satire of the first book - and both together sound like prophecy of the Trump Era. (Zaphod may be a lot more fun and harmless than Trump, but he has all the narcissism and inexplicable popularity.) The jokes at the expense of religion are also a lot more funny now that I am older and a bit more jaded.

To try to summarize the plot seems pointless. The plot mostly exists to carry forward the bizarre imagination of the author. Suffice it to say that the Vogons still want to kill Arthur Dent, Zaphod is still on the run for stealing the Heart of Gold, and bad things happen.

The details are fun, though. I vaguely remembered the scene where Arthur crashes the ship’s systems trying to get the replicator to make a decent cup of tea. I didn’t remember the hilarious repartee between Zaphod and his great-grandfather (Zaphod Beeblebrox IV - the numbers are backwards because of an accident involving a time machine and a contraceptive…)

I also remembered a good bit of the restaurant scene - which still rates as one of the best in the series. The uncomfortable exchange between the diners and the beast which has been bred to desire being eaten made me wince as much as I did when I first read it. What is it about us humans who have less difficulty eating something which definitely did not want to be eaten than we would something which did? That’s kind of weird if you think about it. I also didn’t anticipate last time I read it that I would eventually have a daughter (#2 - the morbid one) ask me at age 3 if animals liked being eaten.

So, there were a few lines that stood out enough that I remembered them even though I was driving while we listened.

The first is about the Hitchhiker’s Guide itself.

The Hitchhiker’s Guide to the Galaxy is an indispensable companion to all those who are keen to make sense of life in an infinitely complex and confusing Universe, for though it cannot hope to be useful or informative on all matters, it does at least make the reassuring claim, that where it is inaccurate it is at least definitively inaccurate. In cases of major discrepancy, it’s always reality that’s got it wrong.
This was the gist of the notice. It said “The Guide is definitive. Reality is frequently inaccurate.”

Hey, that sounds super familiar! And not just because the followers of Galen considered the corpse to be inaccurate when it failed to match Galen’s descriptions.

Rather, this is how the Fundamentalist tradition I grew up in approached the Bible - it was always the infallible guide to Life, the Universe, and Everything. It was to be taken literally as an instruction book and inerrant guide to everything from science to ethics.

And when reality contradicted it - or really, when reality contradicted the theological superstructure - the layers of interpretation and doctrinal dogma which told us what the ancient book meant, well, it was always reality which was wrong, not the dogma. So if the dogma told us that the book meant that women were to be subservient to men, then, well, the reality of the equal intelligence of women was clearly in error. Reality was “inaccurate.”

Adams is definitely on to something here. His analogy of the Guide is also interesting in a way I didn’t realize when I first read the book. The point of a guide book of this nature is that it should be constantly revised to reflect better knowledge, new information, and ongoing changes. That’s why nobody buys the 1976 AAA guidebooks now. (Actually, the internet has replaced those altogether these days.)

In our modern times, we, for reasons I am having a harder and harder time understanding, seem intent on considering our sacred books “definitive” because we view them - and their interpretation - as unchanging. As in the case of the Guide, this is rather obviously bunk. Not only that, it is exactly opposite from how the ancients viewed them. As Yale professor Christine Hayes points out in her fantastic course on the Old Testament, the ancients considered their sacred writings to be definitive not because they didn’t change, but because they did. They were living, and the stories were retold, rewritten, and reinterpreted to reflect changing needs and changing issues. (It is not an exaggeration to say that this course is the best thing I have ever listened to on the OT - it is such a refreshing look at a difficult collection of writings that have been so abused by my faith tradition.)

Not too long afterward, when Zaphod finds himself about to be put into the Total Perspective Vortex, the author writes a few more zingers.

The Universe, as has been observed before, is an unsettlingly big place, a fact which for the sake of a quiet life most people tend to ignore.
Many would happily move to somewhere rather smaller of their own devising, and this is what most beings in fact do.

Adams then cites an imaginary race which lives in a single tree - and the only way people leave is when they are kicked out for asking uncomfortable questions which presuppose a larger world out there.

Exotic though this behavior may seem, there is no life form in the galaxy which is not in some way guilty of the same thing, which is why the Total Perspective Vortex is as horrific as it is.
For when you are put into the Vortex you are given just one momentary glimpse of the entire unimaginable infinity of creation, and somewhere in it a tiny little marker, a microscopic dot on a microscopic dot, which says, “You are here.”
…[I]f life is going to exist in a Universe of this size, then the one thing it cannot afford to have is a sense of proportion.

I will mention the captain in the bathtub, the band Disaster Area and the whole mythology surrounding it, Max Quordlepleen - the quintessential Las Vegas MC and comedian, then endlessly delayed flight. And, of course, the real ruler of the galaxy, with is endless ontological uncertainty. I found that I enjoyed this installment more than I recalled enjoying it previously, presumably because I get more of the jokes this time around.

I mentioned above that Martin Freeman was excellent. I was a bit worried, because the audiobook of The Hitchhiker’s Guide to the Galaxy was narrated by Stephen Fry, who is so delightful that I expected disappointment. But actually, Freeman was great. In particular, his imaginative voicing of the various eccentric minor characters was impressive - you could easily believe it was different actors playing the parts. Our library has the third book also narrated by Freeman, which makes me happy. I am looking forward to that one.

Posted by Diary of an Autodidact at 10:46 PM