My Fair Lady by Lerner and Loewe (Empty Space 2018)

A solid two decades ago, I had the pleasure of playing in the pit orchestra for California State University Bakersfield’s production of My Fair Lady. For the most part, it was a great experience. The music is wonderful, the dialogue witty, and the accents delightful. The only downside was that I never did get to actually see the musical. Oh well, such is the life of a musician.

While The Empty Space had no room or budget for a live orchestra, their production of My Fair Lady was a blast - and it really was nice to see it live.

The musical is based on George Bernard Shaw’s play, Pygmalion, which is in turn a reference to the Greek myth, wherein the sculptor Pygmalion falls in love with one of his statues, which comes to life. (By the way, the sculpture woman is named Galatea - that’s not a well known fact, for whatever reason.) The story of Pygmalion has been recounted and remade and reimagined for a few thousand years - Shaw was hardly the first. Rather, Shaw’s version was likely inspired in part by a real life Pygmalion: Sir Thomas Day, who in the mid 1700s adopted an orphan girl with the intent of sculpting her to become the perfect submissive wife. It didn’t work. A series of novels based on the tale became popular after Day’s death, and the idea remained in the popular English consciousness. In what is an interesting coincidence, I am currently reading about Sir Thomas Day - stay tuned for that review - and just finished Anthony Trollope’s Orley Farm, which contains a subplot based in the story.

Shaw’s play was performed in various formats over the years, but it was Alan Jay Lerner and Frederick Loewe’s musical version which became wildly popular. For most of us, we are most familiar with the movie version, starring Rex Harrison and Audrey Hepburn.

From the very beginning, though, there was a great conflict between Shaw and those who produced the play. Nobody liked Shaw’s ending. In the original, Eliza walks out - and Henry is left alone.

Now, let me be fair here: Shaw was following the original source material. Galatea doesn’t take too well to Pygmalion. And, for similar reasons, Eliza (in the original play) isn’t interested in being controlled by Henry Higgins. And that is the major meaning of the story: you can’t create a perfect human female so you can control her. Not that the story has stopped anyone from trying, apparently. Ditto for parents and their children - how many billions have been spent on formulae promising to make your kids turn out the way you want them to?

I wholeheartedly agree with Shaw on this, by the way. Higgins is an amusing character, but he is basically an abusive narcissist. There is nothing cute about a potential marriage between an unreformed Henry Higgins and a newly competent Eliza Doolittle. All the Broadway magic can’t save that relationship.

Well guess what? The Empty Space, and specifically director Ron Warren, went with the more liberating - if less romantic - ending. I am impressed - well done.

Actually, there was a lot to love about the production. Warren has a degree in linguistics, and had the cast well prepared. The actors also wisely avoided the trap of trying to imitate the iconic performances from the movie - and instead made the characters their own. One of the results of this was that some of the sexist attitudes which were accepted without much comment in the movie were treated with a more modern response. I’ll mention a few as I go along.

The lead characters are extremely important in any production of My Fair Lady, because their chemistry - or lack thereof - will make or break the play. In this case, a couple of Empty Space regulars took on the roles.

Tessa Ogles has appeared in a number of local productions, most notably in Romeo and Juliet last year, where she played an innocent and naive Juliet. This role was quite a bit different. Eliza may be pure and all, but she is anything but naive. Plus, she is loud, assertive, plucky, and proud. Ogles really did a fine job in bringing out her character. In addition to the acting, Ogles has a fine voice - I would say the best in this cast - and just owned the musical numbers she was in. I hadn’t heard her sing, so this was a pleasant discovery. 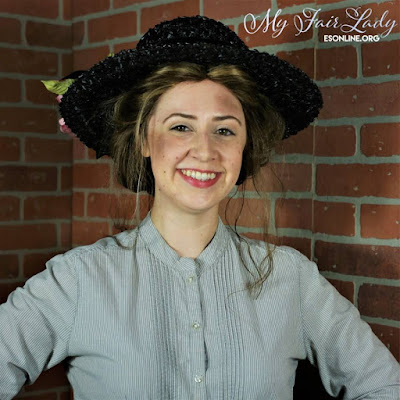 Henry Higgins was portrayed by an equally talented young actor, Tevin Joslen. I have previously mentioned his fine work in Ragtime and Angels in America. Joslen has a seemingly rubber face, with scowls and smirks and sneers enough for a whole range of characters. They were on full display in this performance. He nailed the arrogance and misogyny of Higgins - and made you believe the character really didn’t realize what he looked like. Rex Harrison was, as is well known, very much like Henry Higgins in real life - and a pain in the ass to work with. I rather doubt Joslen is in that category, but he can sure make the character believable. From previous productions, I know that Joslen sings well. In this case, he mostly followed Harrison’s singspiel method, with more talking than singing in the songs. However, there were some moments were he correctly followed the real musical line where Harrison was all over the place. (Hey, I played those songs - I know…) Despite this similarity, Joslen was no imitation of Harrison. The character was his own version of Henry - a younger and less stuffy version, perhaps, with less of a gentelle edge. I should also mention that my kids thoroughly appreciated his ninja-level tea spitting. That was impressive. 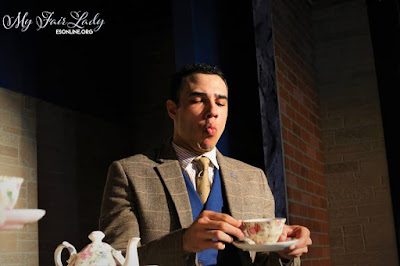 Ron Warren played Colonel Pickering. I have to say that the movie did have a decided sour note with this part. No retired military office of Shaw’s time would have gone clean-shaven. Really, the character looks more like a dandy than a soldier. Warren went with epic mutton chops and a suitably gruff and rough personality. Which is how it should be. 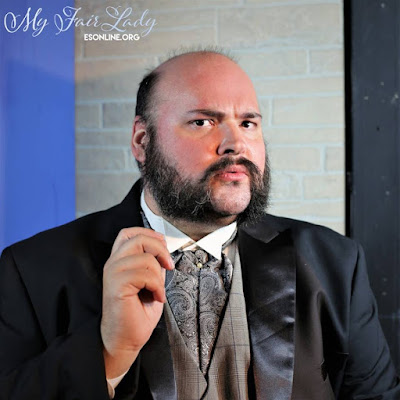 Theater veteran Julie Gaines was excellent as Mrs. Pearce. It’s always a pleasure to see her in any role - she was hilarious in Arsenic and Old Lace. For this production, she was rather more feminist than in the original, with less of a silent servant persona. You can tell that she had no illusions about who Higgins was. 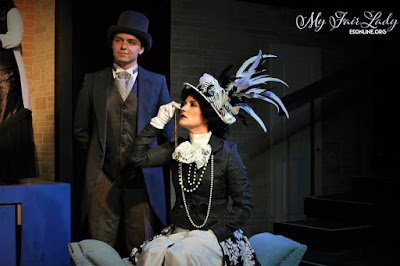 Alex Mitts as Freddy and Marti Hoyt as Mrs. Eynsford-Hill

I’ll just mention a few more. Alex Mitts gave an earnest and likeable turn as Freddy. Perrin Swanson (no relation, but I’ll take him) showed off his dance skills and more as the inebriated Alfie Doolittle. Marti Hoyt (another regular in a variety of roles) was positively poisonous as Mrs. Eynsford-Hill. As Mrs. Higgins, Cathy Henry had the gravitas to put her son well in his place. The rest of the cast filled in numerous other parts with aplomb - particular kudos for solid pitch, even when Alfie Doolittle went a little drunkenly off key. 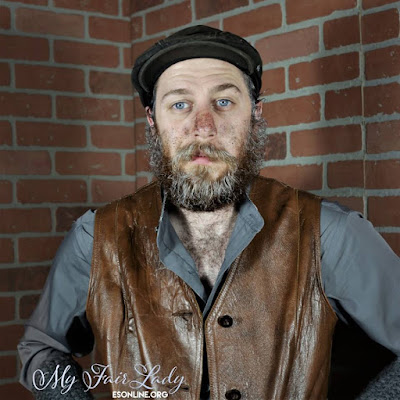 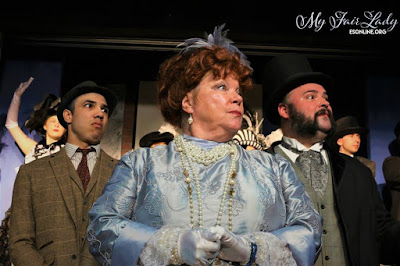 My Fair Lady is in some ways a guilty pleasure. The songs are so funny. And so horrible. “Let a Woman in Your Life” is one of the most quotable songs of all time - but so very misogynist. Ditto for “A Hymn to Him” (better known as “Why Can’t a Woman be More Like a Man”). But we do quote them all the time at our house. In fact, the phrase “Why Can’t a Woman be More Like a Man” is a bit of an in joke for our marriage. Amanda tests consistently on the “masculine” side of personality traits - much more so than I do. (On a related note, she has been known to dance around the house singing “It Takes A Woman” from Hello Dolly after fixing the washer…)

So yes, some sexist humor, for sure. But ultimately, Shaw’s masterwork and its descendents are a brilliant satire of sexism. The Broadway glurge notwithstanding, the story is about Eliza - her hard work and triumph despite her impoverished upbringing, and the sexist nonsense of Higgins.

One more thing, though, that Ron Warren mentioned in his notes on the musical: Higgins is only half right. He places all of the responsibility for the class divide on the speaker. Eliza is held back by her speech, after all. But Warren notes that the fault lies at least as much with the listener. Those with privilege tend to dismiss those who fail to sound, look, and act like us. As he puts it, “Why do we allow the accent a thought is expressed in excuse us from taking the thought seriously?” It is a good question to ask ourselves on a variety of cultural issues. (One that comes readily to mind is the insistence that one “sound white” to advance. Food for thought.)

I should also mention that there is a fun personal connection here: my wife has been involved in our local knitting guild (yes, that’s a thing) and is the president this year. Ron Warren is the proprietor the local yarn shop, which also employs Perrin Swanson. My wife has taught classes there. So, there were various hand knitted items as props throughout the musical.

Posted by Diary of an Autodidact at 8:48 PM