Harry Potter and the Philosopher's Stone by J. K. Rowling

Source of book: We own all the Harry Potter books...but this one was the Stephen Fry audiobook version borrowed from a friend.

I AM NO LONGER A MUGGLE!

Yep, I finally have had my Harry Potter initiation, and can now take my place in Hufflepuff.

How did I manage to miss reading Harry Potter back in the day? Well, the first book came out when I was age 20, and at the time wasn’t really reading kids books. More like classics and law related stuff. As the tail end of Gen X, HP wasn’t really my generation’s thing. That was the most important factor.

The other was that in the Fundie subculture I was in, Harry Potter was looked on (at first) as amusing but suspect for the magical content or even (as the series went on) as the gateway into the occult. Yeah, it was an interesting time and place. To be clear, my parents were never as Fundie as many, even if we did spend time in Bill Gothard’s cult. But we did have some embarrassing moments, such as burning a few Tolkien books. (Yeah, I wince about that a lot. At least they were trade paperbacks which were falling apart anyway. And my parents changed their mind and went to the LoTR movies with us when they came out.) So, at least in the circles I ran in, HP wasn’t cool. So I just never read them.

In hindsight, of course, I missed out on what is probably the most important cultural touchstone of Gen Y - and indeed of just about everyone younger than me. My wife has gone so far as to say that understanding HP is going to be crucial for understanding Millennials. And I agree.

Just to give one example: I adopted the moniker “The Toupee Who Shall Not Be Named” to refer to a certain white nationalist narcissistic sociopath who somehow ended up rising to power. It turns out that I wasn’t the only one. A couple months ago, a few of the kids and I went to see the Punch Brothers down in LA - and Chris Thile, who has been outspoken against TTWSNBN - used “He Who Shall Not Be Named” as well. So I am in good company. (Seriously, if you haven’t discovered Chris Thile, he is a freaking musical genius, and may have actual wizard skills on the mandolin. Not All Who Wander Are Lost is one of my favorite all-time albums, and his latest solo effort, Thanks For Listening, has been a godsend for explaining the experience of people like me trying to navigate family and friendship in the era of emboldened racism, hate, and fascism - which a distressing number of friends and family support. And the Punch Brothers are simply astonishingly good in concert. Worth every penny.)

Anyway, I finally did it, and started with Harry Potter.

Astute HP fans will notice that I used the original British title. That is intentional. We listened to the UK version of the book, with that title, and a lot of Britishisms which were changed for the US version of the book. It is difficult to get UK versions here in the US, while the US versions are ubiquitous. My kids have read (and re-read) the US versions, so they were fascinated by the differences in the UK. Such things as the gratuitous use of “queue” and “lorry” and such - and also “trainers” for what we call “sneakers” here. This wasn’t really a problem for me or the kids, though, as we all read British literature avidly. Such luminaries as P. G. Wodehouse come to mind as excellent sources of Britishisms.

The most important difference, though, in my view, is suggested by the title. Apparently, the publishing powers that be didn’t think that American children were smart enough to know what the Philosopher’s Stone was. I suspect that a generation of much-maligned Millennials would be happy to disagree with that assessment. My children, certainly, were irate that they were disrespected so.

In any case, the UK version is great. Stephen Fry should be enlisted to narrate as many audiobooks as possible, because he is fantastic. And Harry Potter was fun.

Just a few comments. First, as my brother (who read the books long before I did) pointed out, the writing is a bit uneven - particularly in the earlier books. There were a few moments where I felt things could have been done better. Overall, the writing itself was decent, but not transcendent. The characters felt a bit underdeveloped, although that is the risk in any shorter kids book. It is my understanding that it gets better as the series goes on. The story, though, is indeed highly imaginative, suspenseful, and engrossing. Harry is believable, Hagrid is delightful, and by the standards of the time, Rowling went against stereotypes. In particular, Hermione took the role as the nerdy sidekick often reserved for males. And Ron wasn’t the dumb jock - he combines a certain street sense with knowledge of chess and other “nerd” signifiers. It’s not that Rowling was the first to do this or anything, but she deserves credit for bringing a more feminist and less gender essentialist viewpoint to mainstream - nay, superstar - pop culture.

I also want to mention that having read the first book, I do have to agree with another ex-fundie writer (I can’t remember who at the moment) pointed out that the real reason Fundies freaked out about the books wasn’t so much the magic, but the fact that the books support the idea of going against authority when that authority is wrong, or even evil. Having lived through Gothard, and his fundamental idea that obedience to authority was “god’s way” and that failing to obey in every respect - including adopting one’s “authority”’s cultural preferences - I can see why books like this would be problematic. Which leads me to the final point.

I think that it was a line near the end of the book which really was the most important. It comes from Professor Quirrell, who has been possessed by Voldemort. After Harry tracks him to the hiding place of the Stone, Quirrell explains to Harry what he has learned from Voldemort:

“There is no good and evil, there is only power and those too weak to seek it.”

On the one hand, this is nothing new to literature. I mean, villains since time immemorial have combined a lack of morality with a lust for power - it is pretty much part of the villain union contract. Whether historical figures (say, Julius Caesar, or Hitler, to pick two examples) or the movies (Star Wars - to use MY generation’s cultural touchstone), or theory (pick your myth…), this is part of human nature. Specifically, there have always been people like Voldemort - and people like Quirrell, more than willing to kiss the dirty ass of the powerful and cruel to gain their own advantage.

In fact, that is the real story both in the book - and in reality the last few years. (And believe me, many of the younger folk see the parallel really well.) The story isn’t that people like Voldemort and Trump (and Paul Ryan and Mitch McConnell for that matter) exist. Of course they do. The real story is who the Quirrells are.

Just as Harry and friends are rather startled to discover that it isn’t the unpleasant Snape that is the traitor, many of us have been disappointed to realize that it is the white Evangelicals in our life that are willing to overlook every kind of evil in exchange for the chance at power. (Well, that and the change to further their no-longer-hidden racism…) If any line exemplifies what I see happening, it is the one above. After a lifetime of being told that good and evil matter. And that racism is evil, adultery and rape are wrong, and slandering others is wrong...well...it turns out that for white Evangelicals… “there is no good and evil, there is only power and those too weak to seek it.” As soon as there was the smell of power, all morality went out the window.

Baby Boomers, you might want to take note. Despite the endless onslaught of articles bitching about how horrible the Millennials are, they actually read more than you do. And Harry Potter is a huge reason why. When they see you selling your souls for political power - and for the opportunity to harm people outside your tribe (don’t get me started on the racist shit I keep hearing from Trump supporters I know) - they are seeing it through this lens. The lust for power trumps (pun intentional) everything else, from the morality we were taught, to basic human decency.

I look forward to experiencing the rest of the Harry Potter books. It appears that Stephen Fry narrated all of them, so I hope to continue that trend.

My second daughter (age 14 - and snarky as heck) still thinks I am a muggle. She's the one who just called "good night old man" down the hall. But don't get me wrong, she is a great young lady who is one of the hardest working and most helpful people ever, and we have a mutual sarcasm thing going here. She is very much a Ravenclaw - and she wears her Ravenclaw gear to school regularly. She will probably read this post and tell me all the things I got wrong.

When I was in Jr. High, I had a huge crush on Anne of Green Gables. If I had been born later, I can tell that I would have crushed so hard on Emma Watson. And really, as a grown woman, she is damn hot, and apparently smart as heck. So there you have it, one of my celebrity crushes. My wife can dream of David Tennant. ;) I'll go with Emma Watson and Megan Follows... 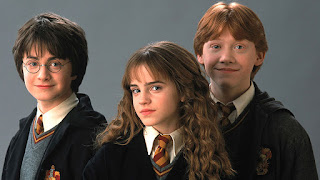 Posted by Diary of an Autodidact at 11:33 PM