I am a fan of Dover Publications. Over the years, they have been a source of imaginative coloring books for the kids, an affordable source of more obscure classics, and some interesting titles on a variety of brainy subjects. This book is an example of the last category. I bought it on a whim - probably it was on sale - a few years ago. 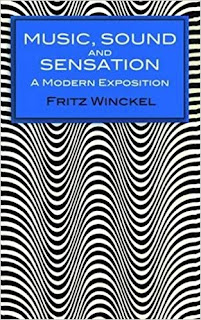 Music, Sound, and Sensation was originally published in German in 1960. In 1967, Thomas Binkley translated it into English, and that is the version I read. The book shows some signs both of being translated from a language from which there are not always direct parallels, and also of being translated by someone who knew more than average about the topic. This means the occasional digression (in footnotes) on the original word used, and a lot of big technical words. I found I drew on both my knowledge of acoustical physics (I don’t have the math background, but I know the basics of how stuff works) and my practical experience as a musician over the last 34 years.

The book is primarily about psycho-acoustics. That is, it is about how humans experience and perceive musical sound. Winckel draws from the insights of physical acoustics and new (at the time) research into the way humans process the sounds we hear. As a result, there are some interesting discoveries in this book, some of which were surprising to me.

One of these was just how “impure” musical tones are. I don’t mean in the sense of overtones. I have been quite aware of those, and how far the get from consonance as you go up to the higher numbered partials. Rather, in this case, it is that the fundamental tone of any note isn’t so much a frequency as a bell curve of frequencies with the note we “think” we hear at the top. As the author put it, a musical tone really should be thought of as “colored noise.”

Also interesting in this regard is that the initial sound of a note, whether sung or played on a non-digital instrument, has a broader band of frequencies than it will have once it “settles in,” so to speak. This initial transient (what we would call an “attack”) is more noise than pitch, and yet we humans can determine the pitch before the noise clears.

Transients turn out to exceedingly important to music. Speech itself is a series of rapid transients which convey information. Likewise, the transients in music are full of information and are crucial to our enjoyment. One interesting experiment cited was one where various instrument tones were played, but without the initial transient attack. Even knowledgeable listeners had great difficulty telling instruments apart without the transients. Not just subtle differences either - it was hard to tell a violin from a cornet.

Speaking of transients, the fastest the average professional pianist can play is 12 notes per second. (More or less.) While I think violinists can beat that, for all musicians, that 1/12 second speed is pretty close to the human perception of notes. Faster, and we get a tremolo or glissando effect. In fact, human speech seems limited to 12 transients per second, or it becomes unintelligible.

[Weird side note: a decade or so ago, Derek Fisher of the Los Angeles Lakers caught and inbounds pass and shot it to win the game. The clock - which starts when the pass is caught - had 0.4 seconds left. Bitter Spurs fans were sure that it was impossible to catch and shoot in that little time. Musicians, however, knew that we could fit at least 5 notes in that space - string players, perhaps 10 or more.]

These are just a few of the phenomena discussed in the first few chapters. The book is pretty heavy on detail, so be prepared for stuff like how many milliseconds it takes for the ear to detect transients, tones, etc. (Layman’s answer: pretty darn fast. Scientific answer: in some circumstances, 10 ms. Which is slow in the scientific sense, actually…) And yes, there are graphs and stuff - I like that kind of stuff.

One thing that was both comforting and not so much was the fact that our ears cannot distinguish intonation nearly as well as we think. This is comforting in that we string players spend our entire lives trying to improve our intonation. So it is nice to realize we have a bit of a margin for error. Not so comforting in that the fact that we are out of tune more than we would prefer means that acoustically, we are actually really out of tune more than we think. Sigh.

Also interesting regarding the topic of intonation was the role of vibrato. Any string player can tell you that vibrato can make up for a certain amount of imperfection in intonation. What was more interesting is that the significant detuning that vibrato adds seems necessary for long notes in general. The ear (and/or brain) tends to perceive vibrato-less long notes as detuning, even if they are steady, and notes with no change can tend to disappear from the consciousness if held too long. So, the combination of changes in volume and pitch are actually necessary to make music sound “right” to the ear.

The book also spends a chapter on reverberation acoustics. This was quite fascinating. Any musician can give you a thousand stories of both great acoustics and terrible acoustics - and how we feel and sound like a million bucks with the right reverberations. (For what it is worth: here in Bakersfield, the Bakersfield Country Club is the place to have your wedding reception. Both main dining rooms are fantastic. Seven Oaks, on the other hand, is a dead pit acoustically, yet feels like a loud room when full of people. It’s always a challenge to play there.) The discussion includes research on when an echo ceases to sound like a separate sound and becomes a reverberation. (As long as it is softer than the original, the two can be further apart than you would think. Our brains are weird.) Also, the total decay, the slope of the decay, and other factors combine to make a room or hall sound subjectively “good” or “bad.” There is a lot of science to this, which is why there are fewer truly awful halls being built. (Many old buildings sound great - but history is littered with venues that failed to sound as good as predicted.) For what it is worth, I love the sound of Salisbury Cathedral, and hate the sound of St. Paul’s in London. Playing there would wreak havoc with my sense of intonation, and give me a headache in 5 minutes. I don’t know how the choir there does it.

One thing I did find irritating in this section was, well, let me set it up. There are many suboptimal acoustic spaces, and many of us have to play in them. (Don’t get me started on the cavern that is Rabobank Theater.) However, there are adjustments that can be made to mitigate defects. After discussing the optimal range of reverberatory effects, the author stated that “This result, however, does not exclude the capability of a skilled conductor to form a sound that will be very effective in halls not having optimal reverberation time.

While that statement is true, it is also the typical “conductor-centric” view of orchestral music that many of us find irritating. True, a good conductor can do a lot of good for an orchestra. But orchestral musicians do a lot of this sort of thing ourselves. We don’t really have to be told to play shorter staccatos in a hall with long echos. We don’t need to be told to lengthen our decay just a bit in a dead room. We already know how to do that, and do it all the time. A conductor can help with balance (and particularly with the musical interpretation), but trained professional musicians can use their ears and adjust.

There are also some fun facts about the games our ears play. If the ear hears the partials of a particular fundamental note, the brain fills in the fundamental. So certain notes played together can “add” other notes to the perception. One of my favorite examples is the way that some organ stops add essentially non-harmonic notes, which the brain perceives as adding color, not the dissonance one would expect. In orchestral writing, Ravel does the same thing in part of the Bolero. The winds are playing the tune a ninth apart, which seems like it should be gratingly dissonant and unpleasant. Instead, the flute and piccolo just seem to be a colorful organ stop - provided they play perfectly together.

It is this same way the brain processes overtones that allows string players to tune. If you have ever heard an orchestra tune, you know that we get an “A” and that is it. How do we get our other strings right? Well, we are tuned in 5ths (or in the case of the bass, in 4ths, which is the reciprocal of a 5th) and our brains - with a little practice, of course - can detect very slight problems with the overtones. They don’t overlap where they should, and our ears can tell. Not only that, we can tune out (so to speak) the other instruments around us to focus on our particular set of overtones. (Those transients at work again.)

This book was not the easiest to read - I had to bite off no more than 10 pages in an evening before I started to glaze over. However, it is fascinating to anyone who makes or loves music and science.

Posted by Diary of an Autodidact at 4:21 PM