This post is part of my Immigration Series. Please read the introduction, particularly the disclaimer.

One of the greatest challenges in discussing immigration with many people, particularly those on the Right determined to restrict immigration as much as possible (at least from certain countries) is that they are often grossly ignorant of history. The most common - and laughable - claim is this:

My ancestors immigrated legally, and so should everyone else.

For the vast majority of people saying this, the statement is utterly meaningless. It’s kind of like saying “I was born.” Of course you were. And of course the ancestors of most white people in the United States came here “legally.” Because for most of them, there was no such thing as “illegal” immigration. 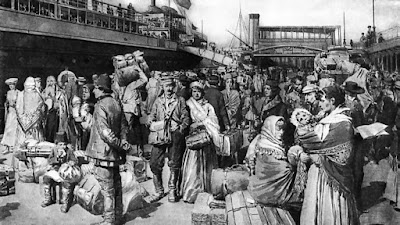 Let’s look at this chronologically. I am only looking at the period of time beginning with the ratification of the United States Constitution, which is the founding document of our nation. Before that, immigration was a haphazard, largely unregulated affair. There was no United States to be a citizen of, so that part was kind of irrelevant.

I also am going to address two separate but related issues: Immigration and Naturalization. Immigration is coming here - and “legal” immigration means the ability to come here and work and live without fear of deportation. Naturalization is the process of becoming a citizen, and includes the right to vote (if you were male) and otherwise participate in the political process.

To the extent possible, I have cited to primary sources as recorded by reputable government or academic sources. All of these are publicly available.

A. The US Constitution

Article 1, Section 8, Clause 4 of the Constitution grants Congress the power “To establish an uniform Rule of Naturalization.” This has been subsequently interpreted to give Congress the power to regulate immigration on a uniform, national basis.

Not many people are aware (in my experience), that until 1882, there were NO restrictions on immigration itself. No federal laws governing immigration, for that matter.

All you had to do to legally immigrate the the United States prior to 1882 is step off the boat, or walk here from Canada or Mexico. That’s it. Get your butt here somehow, and you could work, live, and raise a family without fear of deportation. If you were here, you were here. You had immigrated. Congratulations.

Now, in practice, there were some, um, differences, depending on who you were. If you were, say, African American, if you got off a boat to here prior to 1865, you likely did so in chains as a slave. So, not so good. Yeah, that is an embarrassing part of our history, and one that the Roy Moores of the world would like you to remember differently.

But there were NO restrictions on immigration. None. So keep that in mind when you claim your family immigrated legally. Of course you did. You couldn’t have “illegally” immigrated if you tried!

Ah, here is where the laws were. From nearly the beginning, Congress regulated the process of Naturalization - that is, becoming a citizen. How many of you can tell me how you did that?

Yep, this was enacted right after Congress met for the first time ever. The link above has the text, if you are interested. Guess what the requirements for becoming a US Citizen were?

One, live here for 2 years. (And remember, you could come here without restriction…)
Two, prove you were of good moral character. (Basically, no serious criminal issues - the same thing we lawyers have to prove to get our license. So you could become a citizen if you were no slimier than a lawyer…)
Three, promise to be loyal to the United States.

That’s it. Apply to a court, and get your citizenship papers - and your minor (under 21) children, born here or not, would become citizens too.

Well, five years later, Congress realized it had made a big mistake with the previous law. It wasn’t racist enough!

So, the new law had some changes:

There were a few minor changes regarding children. If a citizen had a child while overseas, that child would be a citizen. (Both of my parents are citizens under the new version of this rule - they were both born overseas to US Citizens - missionary kids.)

Ah, this one is interesting. It was part of the highly controversial “Alien and Sedition Acts,” enacted during the John Adams administration to enable some pretty scary persecution against suspected foreign agents - and the French (this time - previously the Brits were the bogeymen...) in general. Although the acts never went to court (this was prior to Marbury v. Madison, which established the right of the US Supreme Court to rule laws unconstitutional), numerous court opinions since have (in dicta - language not pertinent to the case at hand) pretty clearly stated that they would be ruled unconstitutional had they been challenged. In fact, for lawyers, these acts are kind of the “ground zero” for clearly unconstitutional legislation - we studied them in law school.

Okay, so more changes. The residency time was extended to 14 years, and the notice time to 5 years. The “whites only” restriction continued. Immigrants were required to register when they got there, and, if from a disfavored “foreign power,” post a bond that they wouldn’t get into trouble.

And then, Thomas Jefferson was elected, and the controversial Alien and Sedition Acts were repealed. And replaced, in the case of Naturalization, with this one.

For the most part, things went back to how they were under the 1795 act. Five years residency, three years notice of intent to become a citizen, moral character, renounce titles, swear allegiance to the US. Clarification as to which court to apply to in territories. A few minor tweaks on children, but largely the same idea.

In the aftermath of the Civil War, three Amendments to the Constitution were ratified. The 13th abolished slavery. The 15th granted voting rights to all (male) persons.

The 14th made a major change and clarification to Naturalization law. Essentially, if you were born here, you were a citizen, even if you weren’t white.

Okay, so there was still a problem if you were Native American. They were excluded, despite being the most “American” of all of us…

The key thing here is that the 14th Amendment established “Birthright Citizenship.” If you are born here, you have the right to become a citizen. (Yes, limited diplomatic exceptions, but the courts have generally held that if your parents intend to come here, you are a citizen. Needless to say, this sticks in the craw of Nativists everywhere, who whine about “anchor babies” of the so-called “inferior” races.)

There are other interesting clauses in the amendment, which are beyond the subject of this post, although they are of great interest both to lawyers - and should be to you, as the 14th, more than any other amendment, affects all of us and our rights to due process, equal protection, and justice in this nation.

This act was enacted in the wake of the 14th Amendment, but also, sadly, served as a turning point in the discussion of Immigration and Naturalization. Well, sort of. Because it was “Whites Only” for quite a while on the Naturalization front.

Anyway, this act did indeed follow the spirit of the 14th Amendment in opening Naturalization to blacks not born in the United States (the 14th Amendment itself established birthright citizenship, so all the statute did was to codify that part.)

However, in an ominous development, the Act prevented Asians from becoming naturalized citizens. They could (for the time being) come here legally, but they couldn’t gain citizenship. Keep this in mind as we move to the next section, because it will set the stage for the next 148 years of immigration debate.

So, summary. For the first nearly 100 years of the United States’ existence, you could immigrate largely without restriction. And, at least if you were white, you could become a citizen simply by coming here (by boat, land, or teleportation... ), keeping your nose clean for 5 years, and renouncing loyalty to foreign powers and swearing loyalty to the US (something still part of the Naturalization process, BTW). That’s it. No English speaking requirements. No employer sponsorship. No waiting list.

So, if your white ancestors came to the United States before 1882, there was no way they could have immigrated illegally.

In general, you could immigrate to the United States simply by coming here. If you were WHITE, you could become a citizen after 5 years of good behavior.

In the next installment, I will look at the subsequent history of Immigration and Naturalization laws after the Chinese Exclusion Act of 1882.

Posted by Diary of an Autodidact at 12:22 AM