I previously reviewed Sonnets From The Portuguese, which is the best known of EBB’s works. It is my favorite sonnet sequence - yes, I like it better than Shakespeare’s sonnets, as good as those are - and I consider them some of the finest poems in the English language.


In my previous review, I discussed her life, which seems made for Hollywood but has not, for some reason, been made into a movie. (Since the 1930s, when a forgettable low-budget film flopped.) 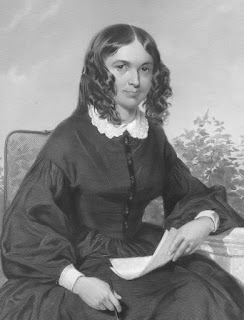 A recent library sale find was a volume of selected poems by both Elizabeth and Robert, and I read from this. About one-third of the book is from her writings, and includes some letters. I skipped the sonnets this time, and also the excerpts from “Casa Guidi Windows” and “Aurora Leigh.” I would like to read the latter in its entirety. The former, perhaps not so much as it concerns Italian politics. What was left was a number of shorter and medium length poems of various types and subjects, from love to ancient tales to humor. There was even a tribute to her faitful dog, who was her best companion (at least before she met Robert) during her many illnesses. Not really a coherent collection, but a nice broad sample of her style.


There are a few that I particularly liked.


“An Island” is a good longer poem that tells of a utopia which turns out to be a mere dream. I won’t quote the whole thing, but a few stanzas will give a good feel.


My dream is of an island-place
Which distant seas keep lonely;
A little island on whose face
The stars are watchers only:
Those bright still stars! they need not seem
Brighter or stiller in my dream.


An island full of hills and dells,
All rumpled and uneven
With green recesses, sudden swells,
And odorous valleys driven
So deep and straight, that always there
The wind is cradled to soft air.


Hills running up to heaven for light
Through woods that half-way ran,
As if the wild earth mimicked right
The wilder heart of man:
Only it shall be greener far
And gladder than hearts ever are.


Trees, trees on all sides! they combine
Their plumy shades to throw,
Through whose clear fruit and blossom fine
Whene'er the sun may go,
The ground beneath he deeply stains,
As passing through cathedral panes.


And so on, until the end, where the poet opines that this could all be, but that mankind gets in the way of God’s will. And truly, the greatest obstacle to the coming of the Kingdom on earth is and has always been the counter-efforts of those who prefer to seek power and dominance instead.


More optimistic, but also lyrical and melancholy, is “A Sea-side Walk.”


We walked beside the sea,
After a day which perished silently
Of its own glory---like the Princess weird
Who, combating the Genius, scorched and seared,
Uttered with burning breath, 'Ho! victory!'
And sank adown, an heap of ashes pale;
So runs the Arab tale.


The sky above us showed
An universal and unmoving cloud,
On which, the cliffs permitted us to see
Only the outline of their majesty,
As master-minds, when gazed at by the crowd!
And, shining with a gloom, the water grey
Swang in its moon-taught way.


Nor moon nor stars were out.
They did not dare to tread so soon about,
Though trembling, in the footsteps of the sun.
The light was neither night's nor day's, but one
Which, life-like, had a beauty in its doubt;
And Silence's impassioned breathings round
Seemed wandering into sound.


O solemn-beating heart
Of nature! I have knowledge that thou art
Bound unto man's by cords he cannot sever---
And, what time they are slackened by him ever,
So to attest his own supernal part,
Still runneth thy vibration fast and strong,
The slackened cord along.


For though we never spoke
Of the grey water and the shaded rock,---
Dark wave and stone, unconsciously, were fused
Into the plaintive speaking that we used,
Of absent friends and memories unforsook;
And, had we seen each other's face, we had
Seen haply, each was sad.


It is in poems like these that EBB seems more a part of the Romantic Era, rather than the Victorian. The bond between humankind and nature, the oneness of all things, and an anthropomorphic view of the natural world are all themes from that earlier era.


There is good evidence too that this poem, written before she met her future husband, was an expression of the frustration of being controlled by her abusive father - and her hope of transcending that situation.


The stanza form in this poem fascinates me. The rhyme scheme is AABBACC. The first and last lines of the stanza have three feet, while the middle lines have five. (So, tetrameter, five lines of pentameter, and another tetrameter.) It isn’t a common form.


One of the humorous poems is worth a read. It is the second of a pair, the first of which is entitled “A Woman’s Shortcomings.” This poem is a gentle riff on the idea of the inconstancy of women, who call feelings love even though they have no intent of being permanent in their affections. The poet, however, saves the zinger for the response poem, “A Man’s Requirements.” It seems like a typical love poem, full of the lover’s desire to be his desired’s all in all. Then the last stanza flips it on its head. Burn.


I
Love me Sweet, with all thou art,
Feeling, thinking, seeing;
Love me in the lightest part,
Love me in full being.


II
Love me with thine open youth
In its frank surrender;
With the vowing of thy mouth,
With its silence tender.


III
Love me with thine azure eyes,
Made for earnest granting;
Taking colour from the skies,
Can Heaven’s truth be wanting?


VIII
Love me when in thy gorgeous airs,
When the world has crowned thee;
Love me, kneeling at thy prayers,
With the angels round thee.


IX
Love me pure, as musers do,
Up the woodlands shady:
Love me gaily, fast and true
As a winsome lady.


X
Through all hopes that keep us brave,
Farther off or nigher,
Love me for the house and grave,
And for something higher.


XI
Thus, if thou wilt prove me, Dear,
Woman’s love no fable.
I will love thee—half a year—
As a man is able.


There is a shade of one of my favorite poems from 200 years earlier, “The Constant Lover” by Sir John Suckling.


The poem is a good reminder of just how well EBB writes of love - the Sonnets are so delicious and profound - but also of her sharp wit and ability to dish as well as take.


The final poem that I would like to highlight is “The Mask.” The basic sentiment was expressed in a shorter form in Paul Laurence Dunbar’s “We Wear The Mask,” a poem which greatly moved me when I read it in high school. (Stay tuned for Dunbar - I’m reading him next.) Later in the 20th Century, songwriter Smokey Robinson would write two songs on this theme. I tend to wear my heart on my sleeve, as anyone who knows me well can attest. But there is so much pressure to wear the mask. To hide one’s pain. And even someone like me has to do it in some instances to preserve relationships. This leaves its mark in stress and fatigue sometimes. Anyway, here is EBB’s poignant poem:


I HAVE a smiling face, she said,
I have a jest for all I meet,
I have a garland for my head
And all its flowers are sweet,—
And so you call me gay, she said.


Grief taught to me this smile, she said,
And Wrong did teach this jesting bold;
These flowers were pluck’d from garden-bed
While a death-chime was toll’d.
And what now will you say?—she said.


Behind no prison-grate, she said,
Which slurs the sunshine half a mile,
Live captives so uncomforted
As souls behind a smile.
God’s pity let us pray, she said.


I know my face is bright, she said,—
Such brightness dying suns diffuse;
I bear upon my forehead shed
The sign of what I lose,—
The ending of my day, she said.


If I dared leave this smile, she said,
And take a moan upon my mouth,
And tie a cypress round my head,
And let my tears run smooth,—
It were the happier way, she said.


And since that must not be, she said,
I fain your bitter world would leave.
How calmly, calmly, smile the Dead,
Who do not, therefore, grieve!
The yea of Heaven is yea, she said.


But in your bitter world, she said,
Face-joy ’s a costly mask to wear.
’Tis bought with pangs long nourishèd,
And rounded to despair.
Grief’s earnest makes life’s play, she said.


Again, there is little doubt that this reflects the pain of her relationship with her father, who insisted that she (and all his children) sacrifice their lives to his comfort and pleasure, and devote themselves to him alone. In retrospect, the fact that she did eventually find love and freedom with a man who treated her as an equal is an unexpectedly happy ending. In that time, her only true option was to marry or remain a chattel of her father. Fortunately, times have changed. But no matter the times, it is impossible not to be inspired by the story of the Brownings: true love based on mutual respect for each other’s intelligence and poetic skill, a marriage that lasted and was happy for both of them, and the likelihood that she lived much longer than she would have without him. Romance at its best.


If you haven’t read Elizabeth Barrett Browning, I recommend starting with the Sonnets, just because they are so wonderful. But her other work is worthwhile too. After all, it was these early works that caused Robert to fall in love before he met her in person, and willing to steal her away from her grasping father.


“Tracks of my Tears” has always been my favorite Smokey Robinson song, and this gives me an excuse to link it here.
Posted by Diary of an Autodidact at 9:02 PM