This is number 16 in Patrick O’Brian’s excellent Aubrey and Maturin series. I’ve been reading these for some time, but started blogging a few installments back. Here are the ones I have already written about. I recommend reading these first, for some background on O’Brian and the series.

While some series can be joined in the middle, this one really needs to be read in order from the beginning to the end. Not only does the series take place in actual historical sequence (although things are bent a bit for the needs of the narrative), but some of the books are linked in a longer story arc.

This book qualifies, as it continues the story begun in The Thirteen Gun Salute and continued through the next two books. So these four books really need to be read as a set - and they make more sense if you have read the earlier ones too, as characters that are introduced in previous books are mentioned. 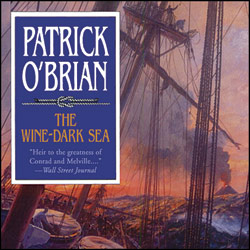 One of the things I love about this series is that O’Brian takes the long view with his characters. Jack Aubrey, in particular, grows from an impetuous young captain to a more mature and steady man as he reaches middle age. We first meet him carrying on an affair under dangerous circumstances (and this affair casts a long shadow throughout the series), but he later marries, and grows up, and changes as he ages. Stephen Maturin is already more of an old soul, but he too ages realistically as time goes on. It isn’t just another rodeo for these two. They are the same people as they are in the earlier books, but with more time and experience. This is good writing, and careful thought.

The narrative in this book takes the crew of the Surprise from the south Pacific island where they have, well, participated in a tribal war, to the coast of Peru, where Maturin, in his capacity as a spy tries to foment a revolution. Things go badly, and Stephen must flee across the Andes to reunite with the ship.

In addition to this main plot, there are some other interesting things going on. Maturin’s friend and fellow doctor, Nathaniel Martin, ends up with a mysterious malaise. He has lost his zest for life and his interest in nature. It turns out that he has been one of those captivated by Clarissa Oakes (from the previous book). Since he is a married man, his conscience haunts him, even though he may never have consummated his lust. Nevertheless, he worries he has contracted a sexually transmitted infection, and nearly kills himself with an overdose of mercury, which was a common - and poisonous - treatment at that time.

Also fascinating to me is the description (largely by Stephen) of the fauna of the Andes, particularly the condor. Regular readers of this blog will know that I have a deep fascination with the California Condor, a bird which nearly went extinct during my childhood, but which has made a comeback as the result of conservation efforts. (You can read more about it in my various posts on Pinnacles National Park.) The Andean Condor is a close relative to the California Condor, and the two together are the largest buzzards in the world. I have seen an Andean Condor at the San Diego Zoo, and, like the local one, it is a beautiful and majestic bird.

O’Brian really does his homework on all aspects of his writing, but I particularly appreciate the biology. I also love the way he incorporates music. Jack Aubrey is a violinist, while Stephen Maturin is a cellist. The two in fact become friends in the first book as a result of their musical interests. Martin is a violinist as well, but not of the same caliber. In this book, they are oh so close to getting a real string quartet, with the utopian French prisoner Dutourd (I believe he is a composite of utopians of the era). Alas, it is not to be, despite Dutourd’s observation, “Quartets! What joy! That is living in the very heart of music.” Like many a string player before me, I would love to spend my retirement playing chamber music with fellow musicians. So Aubrey and Maturin must stick to duets, as they often have, the magic of the quartet alluding them as it usually does.

One final bit is Jack Aubrey’s pithy comment on Dutourd’s utopian dreams. Jack isn’t always that perceptive about issues on land, even as he runs a tight ship. But I think he is right in this case about utopian visions in general.

“He was a Frenchman with enthusiastic visionary notions about an ideal community in a Polynesian island - no Church, no King, no laws, no money, everything held in common, perfect peace and justice: all to be accomplished, as far as I could make out, by the wholesale slaughter of the islanders.”

This has been the problem of utopian ideas from the beginning, particularly in the Euro-American tradition. Utopia requires a clean slate, which in turn requires a wee bit of genocide to clear paradise for the new settlors. Even modern utopias, whether originating on the right or the left, tend to assume pretty significant collateral damage in order to get up and running. The problem is, of course, that a clean slate requires elimination of dissidents, which doesn’t end well.

Anyway, another delightful installment in this series. As always, O’Brian writes dialogue and characters well, and the details add to the experience. Start at the beginning, but take time to discover O’Brian and his unforgettable characters.

There are two composers which appear more often than the rest (at least as I recall) in the books. The first is Boccherini, who would have been only slightly out of date, and this fact would have been compensated for by the fact that he wrote prolifically for small ensembles so his works would have been classics at the time. (Mozart was the new-fangled composer…) The other was Corelli, who likewise wrote an astounding number of chamber works. Certainly out of style by the early 1800s, but nevertheless a staple of string players then - and even now. This Christmas, Corelli will get some play from our orchestra here in the 21st Century.

Some music clips, then. Boccherini duet:

The famous Boccherini quintet, because most of us violinists learned a version of this in our youth, and because it is so delightful.

Posted by Diary of an Autodidact at 9:43 PM