This last summer (2016), we didn’t get to as many parks as we did in 2015, as that feat would be difficult to repeat. We didn’t do badly, however, visiting eight total parks, including one new one (Crater Lake) and one that my youngest hadn’t seen, which is this one, Redwood National Park.

The California redwoods are famous for a reason. They are the tallest plants on earth, reaching 350 or more feet. They are not the largest trees, as that crown goes to the sequoia, nor the oldest, which is the Bristlecone Pine. For sheer size, however, they are impressive. Sequoias are wider - but not by a huge amount. Redwoods are still twenty plus feet in diameter in a few cases, and stretch so high that the tops are often out of sight.

Redwoods grow in a limited band up against the Pacific coast in Northern California. They require cool temperatures, sufficient water, and thrive with fog. In fact, a significant amount of their water supply comes from fog, as the leaves can absorb it. Because of this narrow range of climates that they can tolerate, they are at risk from climate change.

Once, old growth redwood forests covered vast acreages in the coastal hills, but 19th Century logging removed most of the old trees, leaving only about five percent, and these remaining forests are separated from each other. This is problematic for the flora and fauna that requires contiguous habitat. Fortunately, as our knowledge of ecology has grown, so has the drive to protect what remains and to allow the previously logged areas to recover. By selectively cutting, rather than clear cutting, the forest remains healthier even in the logged areas.

Redwood National Park is a peculiar place, in that it is a joint federal and state park. The federal park itself is only a portion of the redwood forest, much of which lies within state parks or national forest land. Because a major highway traverses the park, there is no entry fee for most of it. However, the state parks and some of the areas off the road do charge a fee. (Unless you have a parks pass…) This also means that camping is in the state park portions. We stayed at Prairie Creek Redwoods State Park, which is a delightful area with a beautiful campground. In addition to the trees, which are easily accessible, there is a large meadow that attracts elk early in the morning. (Unfortunately, didn’t get a good picture.)

Like just about anywhere in the wilderness, crowds disappear once you get about a mile from a road, so hiking is really a must here.

Prairie Creek also includes a stretch of beach and a magical place called Fern Canyon. Redwood National Park and the surrounding area features beautiful views and places around nearly every bend. It is impossible to pick just one favorite spot - there are too many to choose. I’d say pick one and explore it thoroughly rather than just driving through and trying to see everything.

Because Redwood National Park is a popular place, camping reservations should be made well in advance. An alternative is to come in the off season. The year after my wife and I married, we made a winter trip through the redwoods. While some of the tourist traps were closed, the crowds were non-existent, and the woods quiet. We did get rained on, but rain in the forest smells so nice anyway. Another bit of advice: expect that driving times will be longer than expected. The roads are curvy, and the scenery amazing, so slow down and enjoy. 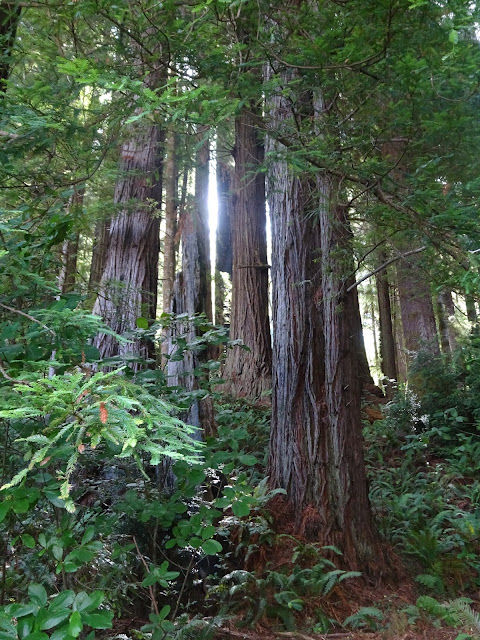 View through trees at Prairie Creek in the morning. I am particularly proud of this picture.
Sometimes, the lighting just turns out right. 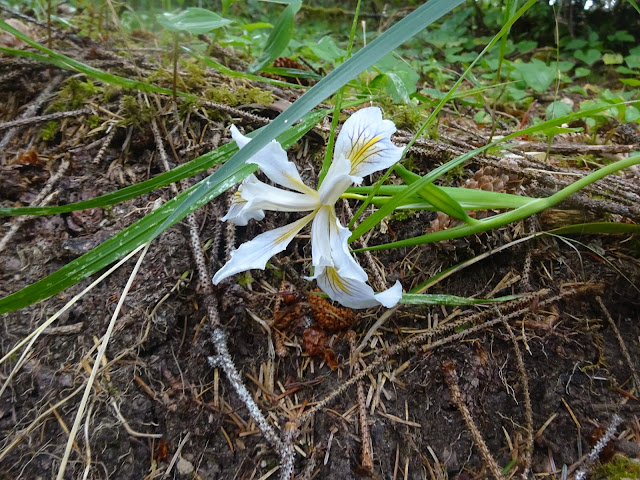 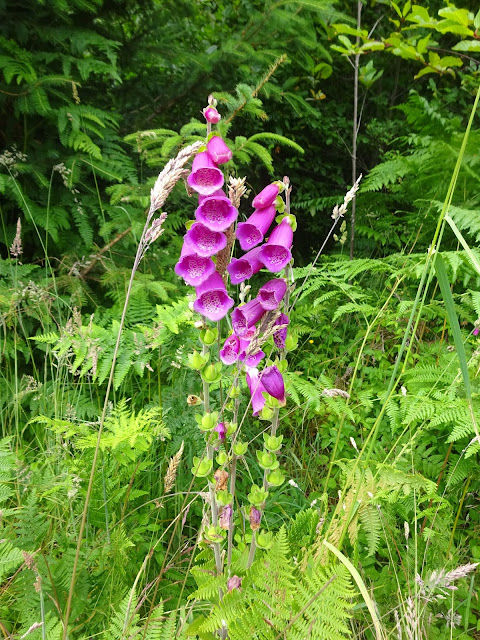 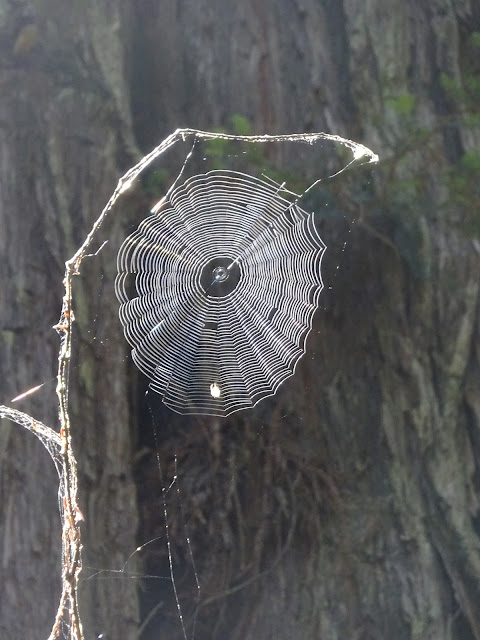 This is another one that turned out really well. Webs are nearly impossible to capture, unless you get them backlit against a dark background. Early morning did the trick here. 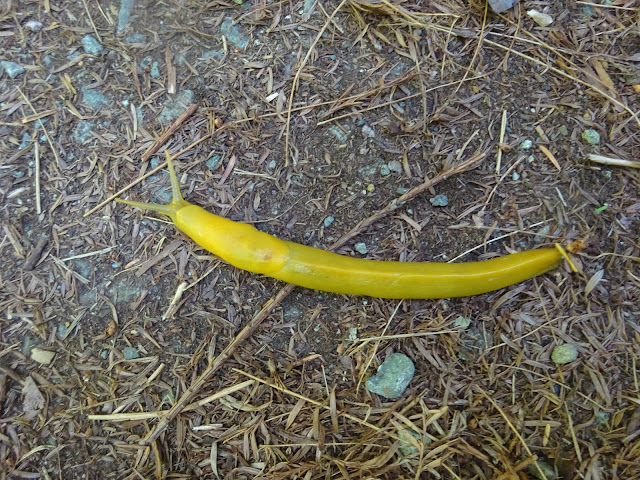 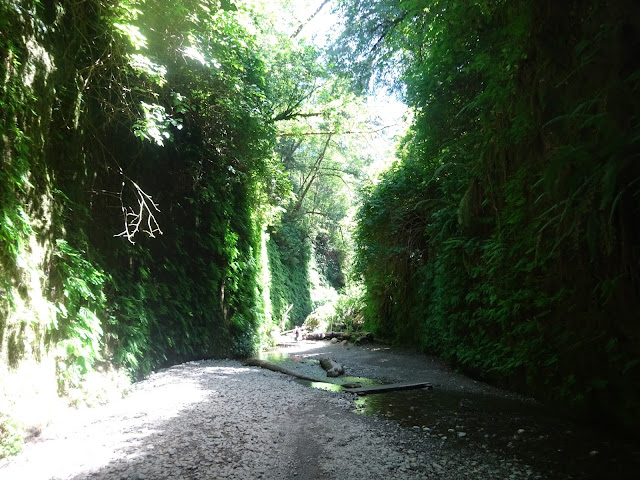 Fern Canyon. The hardest part about this was getting a shot without people in it. 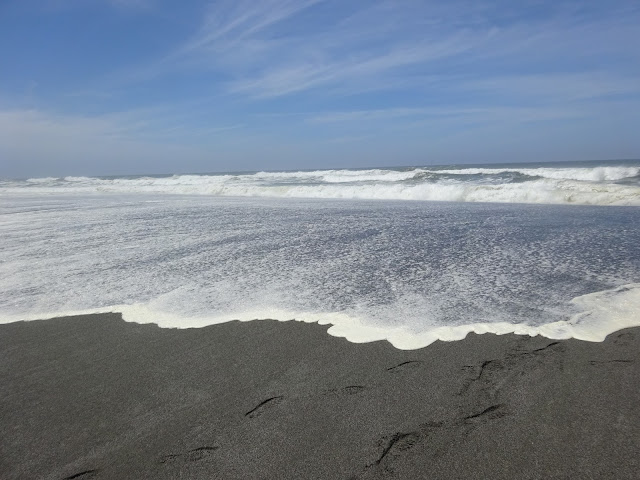 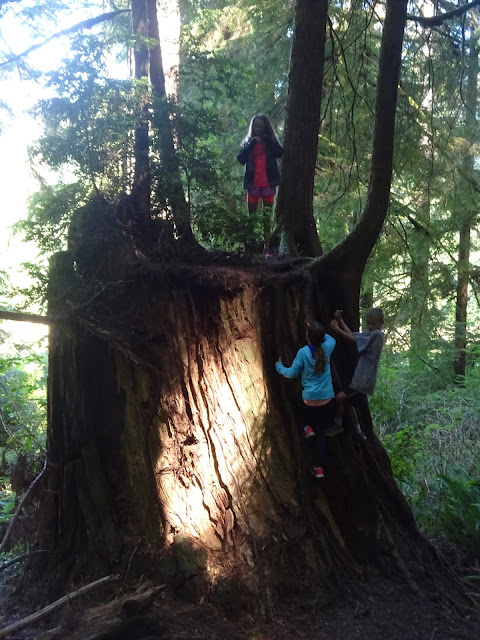 This stump isn't that big by redwood standards. Some kids for scale. 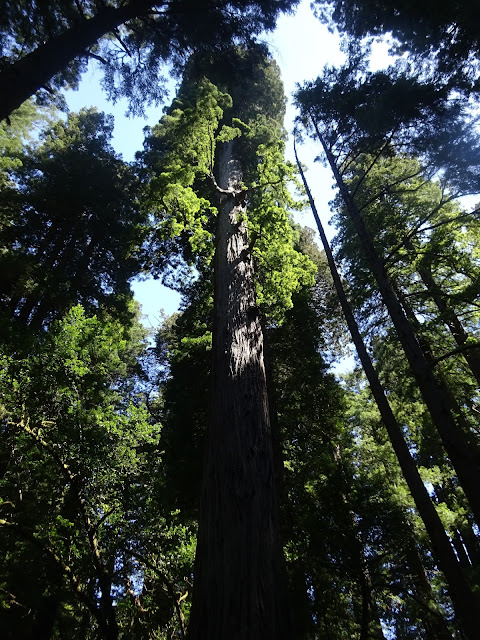 Another tree picture for good measure.

Posted by Diary of an Autodidact at 9:52 PM