You Can't Take It With You by George S. Kaufman and Moss Hart

This was my third live play at The Empty Space this year already - they’ve had a great season.


I attended this one with my lovely and witty wife, who had always wanted to see the stage version of this one. We had seen the movie together years ago, perhaps while we were dating, I think? Anyway, this is one of those 1930s screwball comedies that seem a bit shocking in retrospect for what they got away with compared to, say 1950s television.


The Sycamore clan is an eccentric family headed up by Grandpa, who one day years ago decided that he had enough with his desk job and just quit. Also in the family are his son Paul, who tinkers and makes fireworks, Paul’s wife Penny, who writes (presumably terrible) plays. They have two daughters. Essie is an aspiring ballerina with zero talent, and is married to Ed, who is a bit dimwitted, plays the xylophone (glockenspiel was used in this version), and prints anarchist slogans which he places in Essie’s candies, which they sell. The other daughter, Alice, is the only normal person in the family. Also in the household are Mr. De Pinna, formerly the iceman, who now helps Paul make fireworks - and seems to be the victim of all the accidents that ensue; Rheba the African American maid (in a bit of an unfortunate stereotype), and Rheba’s beau, Donald.


The family all “does what they love” rather than work in a more serious manner. Except, of course, for Alice, who has an office job working for a wealthy Wall Street investor. Alice and the boss’s son fall in love, which leads to, well, complications.


Alice invites Tony and his parents to her house for dinner, but Tony intentionally comes a day early, so the families can see what the other is really like. It does not, shall we say, go well. But it goes rather hilariously. A glorious disaster of epic proportions, in no small part caused by Mr. Kolenkov, an impossibly loud Russian ex-pat, furious about the Revolution.


I won’t go further with the plot than that, other than to note that it is a comedy, so by definition must end well.


For all the hilarity, however, the heart of the play is an important question. How should a person live? Is it best to do what one loves, or does the need to make a living and contribute to society come first? Will, as Grandpa suggests, there be enough people who love to do menial but necessary tasks, or is the whole thing a pipe dream supported by the labors of others?


The Empty Space, as usual, put on an excellent production. Grandpa was played, naturally, with veteran actor and director Bob Kempf, a true fixture in local theater here for decades. Jesus Fidel was hilarious as the ill-starred Mr. De Pinna. Tessa Ogles shined as the earnest Alice. Alex Mitts (son of a legal colleague) did a fine job as the straight man of the play. I also must mention Kevin McDonald, who did such an amazing job as Malvolio in Twelfth Night last year, as the uptight Mr. Kirby. McDonald is somehow perfect when he winds himself as tight as can be, with a delightfully dry aspect. (In his program bio, he had to say what he loved, which was “Kevin McDonald loves writing program notes about himself in the third person…”


Alas for all, we went on the last weekend, so no chance to go see this in person. However, there is a new show every month or so, including In The Heights (by the writer of Hamilton) in July, so come on down if you are in the area. Wherever you are, I encourage you to support your local theater. 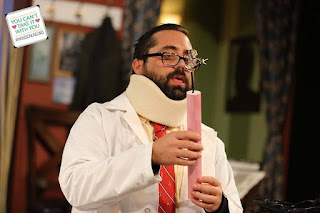 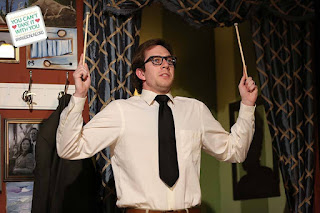 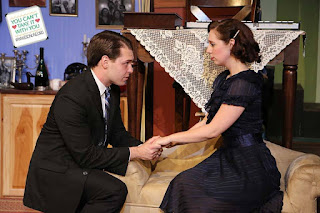 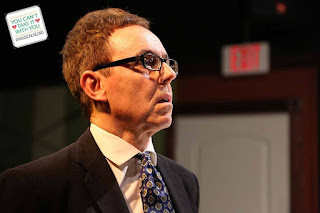 Posted by Diary of an Autodidact at 9:35 PM