The Graveyard Book by Neil Gaiman


Poor Neil Gaiman must have had a lonely childhood. So far, in his kid books, the only friends for his protagonists end up being dead people. And if you count Good Omens, the part he wrote appears to pair up an angel and a demon as each other’s only friend.


The Graveyard Book is as creepy as Coraline, but in a different way. Both stories exist in a world where terror is an everyday occurrence, and malevolent but mysterious forces theaten. You can read my thoughts on Coraline here.


I did not realize this when I listened to the book, but it appears (on further research) that Gaiman intended the book to be very much like The Jungle Books by Rudyard Kipling - only set in a graveyard, not the jungle. Looking back, this is very much how the book turned out, with some strong parallels with the original.


The basic idea is this: Nobody Owens is a boy who wanders from his birth family in the middle of the night to the nearby graveyard. While he is gone, a mysterious assassin, Jack, murders his family, and comes looking for him. The ghosts of the graveyard shelter him from Jack, saving his life. They then raise him, with help from Silas, who is “neither living nor dead.” It is never really clarified what Silas is, although he has a past as a very bad person who reformed, and doesn’t fit into the other categories of supernatural creatures.


Throughout the book, “Bod,” as he is nicknamed, grows up, and has a variety of adventures, culminating in the return of Jack and his secret society (“Jacks of All Trades”) to finish the job - and Bod. Each chapter is a fairly self-contained episode, and Bod ages about 2 years in between stories. This too mirrors the Mowgli stories in a way.


One of the closest parallels between The Jungle Books and The Graveyard Book is the episode where Bod is convinced to run away with the Ghouls, who resemble Kipling’s monkeys. He is rescued by his tutor, Miss Lupescu, who is a werewolf. She, naturally, resembles Kaa in this story.


An interesting facet of this book is the way that Gaiman weaves his themes into the fabric of the story. In Coraline, Gaiman misquotes G. K. Chesterton’s quote about how fairy stories do not tell children that there are dragons, but that dragons can be defeated. In The Graveyard Book, Bod must himself learn to defeat his own particular dragon. This theme of self-reliance and courage in facing one’s fears appears to be one of Gaiman’s favorite ideas.


On a different note, Gaiman also sneaks some history into the book. The graveyard is a very old one, and has now been turned into a preserve. Thus, all the ghosts are folks from the past, from the ancient pre-Celtic days to the 1800s. Their knowledge of the world remains the same as it was when they died, so developments in technology, science, and psychology remain mysteries to them. Silas, on the other hand, travels freely, and thus is able to provide the modern knowledge necessary.


Two incidents stood out in this regard. First is the fact that when Bod does (briefly) attend a public school, he finds himself correcting his teacher on historical points. After all, he actually knows what the people of the past believed and thought.


The second is even more interesting to me. As was common in the past, the graveyard was attached to a church. The church controlled who was buried and where. The graveyard proper was reserved for the “good” people. Suicides, criminals, prostitutes, and “witches” were buried in anonymous graves beyond the official limits.


This segregation remains among the ghosts, who disdain the “bad” people buried elsewhere. Bod eventually figures out that this distinction is ludicrous. As Silas explains, it isn’t that simple. One could be executed for stealing food, for example, and the suicides were generally deeply unhappy people, not evil ones.


In one of the great lines in the book, Silas explains that suicide happens when people are so unhappy that they decide to speed up their transition to another plane of existence, thinking they will be happier. Bod asks if they are happier. Silas replies that they usually were not, because they brought themselves to the new place. I think this is a great way of handling it. I grew up in a religious tradition that believed that suicides went to hell. As I grew older, I found I didn’t believe that, for a variety of reasons. (Not least of which is that I, like C. S. Lewis, do not believe in the traditional - that is, Greco-Roman mythology-influenced hell in the first place. This connection was recognized at least since the mid-1800s, by the way. And that whatever there is, it is locked on the inside.) In this case, Gaiman doesn’t encourage suicide - although he clearly understands it. Rather, he points out the obvious, that for the most part, it isn’t really a solution to anything. The rest of the book is such an affirmation of the value of living that it functions in that way to remind the reader to be both hopeful and active in seeking life.


As for the witch buried outside the graveyard, Gaiman has a few interesting points about her. Bod befriends her, and hears her story. It turns out that like most if not all of those burned at the stake for witchcraft, she was no real witch. At least until after her death, when a plague that she may or may not have called down kills her executioners. Rather, she is an attractive woman, who “bewitches” a man, and is thus considered dangerous.


Gaiman gets this right. Witches generally fell into two categories. The first is the old woman without family to defend - or as importantly, support - her. She is a “useless eater” as the Nazis would later say about another undesirable group, and nobody would avenge her death. Hence the stake.


The second category is the younger woman whose sexuality is viewed as a threat. Often, this would be an outspoken woman, who didn’t fit societal norms and gender roles. Thus, she was a natural and easy target.


There are many great ideas in this book, from the Ghouls already mentioned, to a being called the Sleer who protects the barrow of the Druid king. The Sleer is a parallel to the white cobra in “The King’s Ankus,” and has a similar ending, with the treasure killing those who covet it. I also laughed at the idea of the poet who wasn’t recognized during his lifetime, so wrote only for “posterity,” which seems to have failed to recognize him as well.


Gaiman has a dark and dry sense of humor, and this book, like his other one, isn’t exactly sunshine and rainbows. Fortunately, I have an appreciation for his style and humor. My kids are similar in that respect, enjoying both Gaiman and Wodehouse humor. My second daughter in particular has always had a fondness for the macabre, so darkness, dungeons, rats, and ghosts have thrilled her since she was a toddler. Even the younger kids have come around on scary stories. I have done some of my job as a parent, I guess.


This book, like Coraline, is not for everyone. If you like Poe, this is up your alley.


There are two editions with different illustrators. Each has his merits. 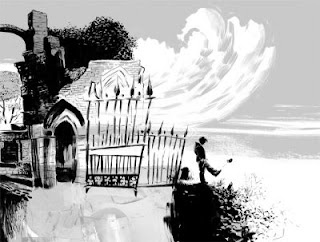 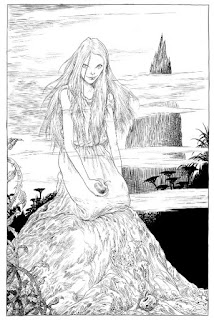 Lighter line art (of the witch) by Chris Riddell


One final thing I should mention in connection with the audiobook. Gaiman reads his own stories - and does a fantastic job. His timing is perfect, and his diction is clear in a moving car, which isn’t a given.


There is one more reason to listen to the audiobook version. Gaiman partners with some interesting musicians for incidental music. Coraline has some creepy songs that are sung by The Gothic Arches. (See my review for a clip.) The Graveyard Book goes one better by enlisting Bela Fleck, banjo player and composer, to write a version of Camille Saint-Saens’ Danse Macabre for banjo and cello.


This is really an amazing idea, both in the abstract, and in the execution.

I have a special love for Danse Macabre. Any fan of old cartoons have heard it, of course. I had the opportunity to play the solo violin part back in my college days. Our conductor at Bakersfield College put together a Halloween concert. In addition to Danse Macabre, we did Mussorsky’s A Night On Bald Mountain (familiar to anyone who has seen Fantasia), Rachmaninoff’s Isle of the Dead (one of my favorite works, written in significant part in 5/4 time), and Charles Ives’ Halloween. Good times. Here is the original Danse Macabre.


For those who are curious, the E string on the violin is tuned down to an E flat, so that it makes a diminished 5th with the A string. Because we had a small orchestra, I used two violins so I could play the orchestra part when needed.


I also have to link some Bela Fleck. Before Chris Thile, before Mumford and Sons, Bela Fleck pioneered the fusion of bluegrass, jazz, and pop. Here is one of his tunes with the Flecktones.


Later, it was destined that Fleck would partner with Chris Thile. One of my favorite albums of all time is Thile’s Not All Who Wander Are Lost, which features Fleck on banjo along with some other incredible musicians. My favorite track, “Raining at Sunset” is worth looking up. Or just buy the album already and contribute to the support of a true genius musician. Here is another track, “Riddles in the Dark,” which re-imagines the battle between Bilbo Baggins and Gollum in the heart of the mountain as a repartee between mandolin and banjo.

Posted by Diary of an Autodidact at 11:41 AM