God never made an ugly landscape. All that the sun shines on is beautiful, so long as it is wild. ~ John Muir


Mention Death Valley, and people start thinking of a bleached cow skull baking in the impossibly hot sun. Perhaps they think of a desolate landscape, with endless sand stretching into the distant horizon.


What one fails to anticipate, however, is that Death Valley isn’t so much a horizontal place, as a vertical place. Within 20 miles, you can find the lowest point in North America and a mountain that is more than 11,000 feet high. Go an additional 100 miles, and you reach Mt. Whitney, the highest point in the lower 48 states.


The reputation of Death Valley as lifeless is likewise false. Life abounds, but often in different forms than we are used to. Furthermore, Death Valley National Park is a huge place, the largest park in the lower 48. In fact, the park is just barely smaller than the state of Connecticut. Finally, while some consider the desert to be ugly, I believe that John Muir was right. There is no “ugly” in nature, just a different kind of beauty.


Two years ago, I visited Death Valley National Park for the first time. I know, shocking, considering I have lived in California most of my life, and have driven within 100 miles of the valley floor dozens of times. We just never got all the way there. The kids loved it so much that they have been begging to go back ever since. My heart is in the mountains, but they are too snowbound for camping during the winter. The desert has grown on me, and I have come to appreciate and love its stark beauty.


Death Valley averages 2 inches or so of rain a year. This is a great example, though, of how “average” and “typical” are not at all the same thing. Some years, Death Valley gets exactly zero precipitation, while other years, it can get much more, often in a single storm.


This actually happened last October. About 3 inches fell in a few hours, causing flooding and damage. (See this LA Times article for the results of the flood at Scotty’s Castle, in the mountains above the north end of the valley. Be sure to watch the video.)


As a result of this, and some other smaller storms, Death Valley received a significant amount of rain. And rain means that things can grow.


Because of the cycle of dry years followed by the occasional rain, the native plants of Death Valley (and much of the surrounding Mojave Desert) have adapted to survive. Seeds can live for years in extreme conditions - the soil can reach 200 degrees F in the summer. But give them a good soaking, and the desert will bloom.


I suspected this would be a good year, so I kept an eye on the conditions. Sure enough, by mid-January, flowers were appearing. I jumped online and found a campsite I could reserve, and we planned a trip. We succeeded in finding abundant flowers (which should persist for another month or so, if you are interested in seeing them.)

These pictures are of the vast fields of Desert Gold which grows on the alluvial fans extending into the valley. These particular pictures are the best of the bunch, and were taken about 5 miles north of Badwater, the lowest point in Death Valley. 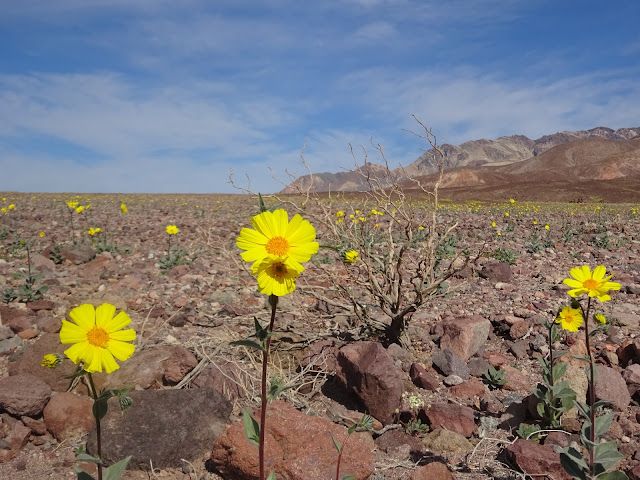 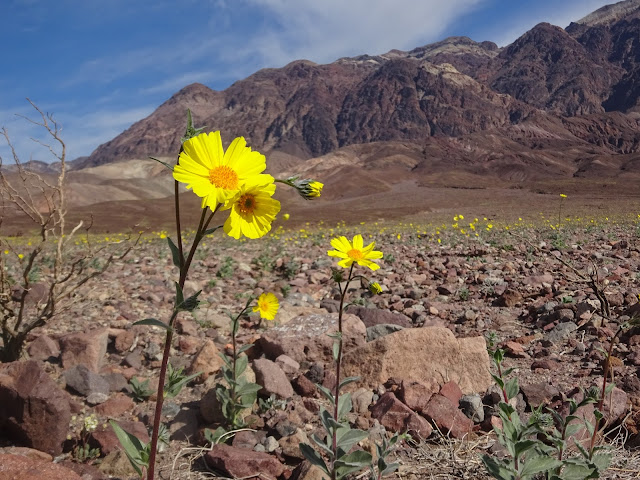 In addition to the Desert Gold, there were also a variety of Evening Primrose and other flowers. 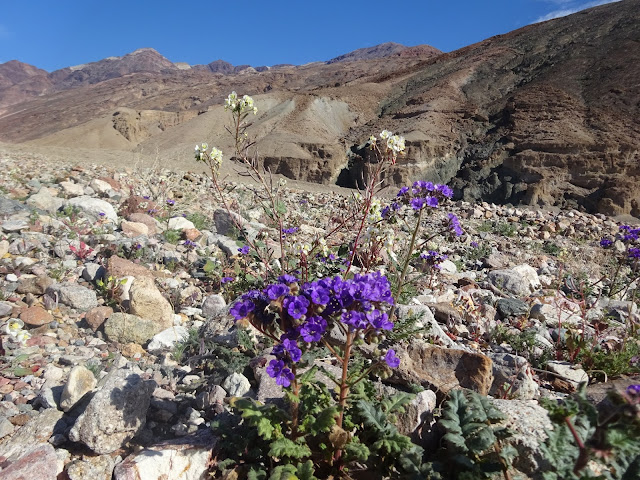 When the air is clear, which is most of the time, distances in the desert can be deceiving. This is the view north from Harmony Borax Works, near Furnace Creek. The near mountains on the sides are about 20 miles away. The more distant mountains at left center are 50 to 75 miles away. The barely-visible ones behind that are 100 miles distant, and are at the very far end of the valley. It’s a big place. 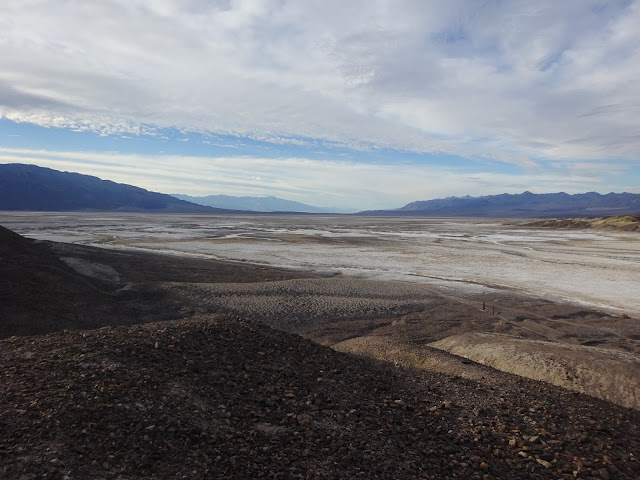 Death Valley isn’t particularly sandy, actually. But it does contain several dune systems. The most easily accessible is the Mesquite Flat Dunes. They cover quite a large distance, but are not that tall - the tallest is only about 100 feet. (The Eureka Dunes are much taller, at nearly 700 feet, and are more pristine. They are harder to access, though, so we have not yet visited them. Maybe next trip…) I got this spontaneous picture of my eldest daughter, Ella, doing a handstand on top of the tall dune at Mesquite Flat. 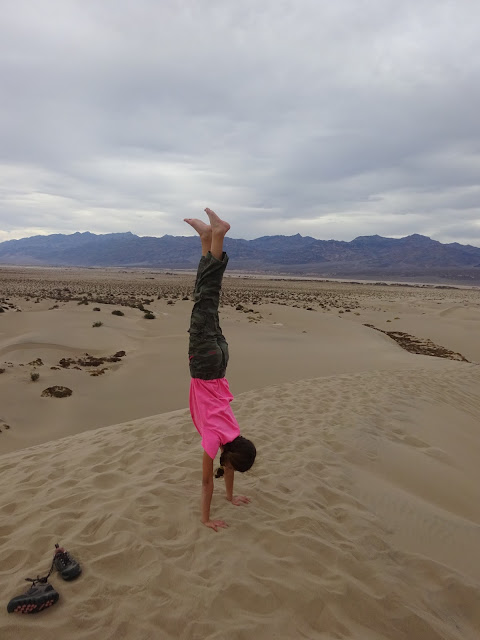 Death Valley has an interesting geological history. Two plates pulled apart, and the rocks in between fell down to the side like closely packed dominoes. This created the set of parallel mountains and valleys that are the “Range and Basin” formation that covers much of Nevada and parts of Utah and California. In the distant past, the area had a tropical climate, and Death Valley was filled with a giant lake. Later, after the Sierra Nevada mountains were pushed up, rain was blocked, and the area became a desert. You can see evidence of the different epochs exposed throughout the park, from some (geologically) recent volcanic activity, to metamorphic rocks dating back a billion years. Because of the way the valley was formed, there are steep and rugged mountains surrounding the valley on both sides. Erosion has created spectacular side canyons.

As I tell people all the time, you simply cannot truly experience nature from a moving car. You really need to get out and hike. Death Valley has many hikes up the side canyons. This is one of the best, Mosaic Canyon, on the west side of the valley. Layers of marble alternate with breccia. You can read more about the history at the USGS page. 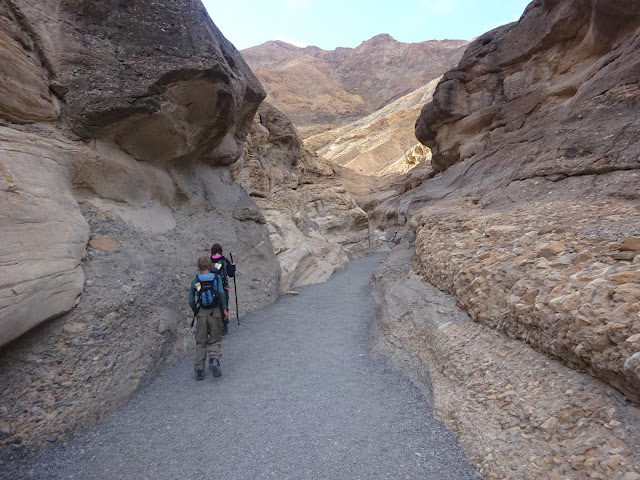 On the other side of the valley, and a bit south, is one of the most famous places in the park. If you are a U2 fan, you probably know the cover to The Joshua Tree.  Less well known is that the famous pictures were not taken at Joshua Tree National Park. The tree comes from Inyo County, near Red Rock State Park. And the cover itself comes from Death Valley National Park, specifically Zabriskie Point. Leading from that spot down to the valley floor is Golden Canyon. (And also Gower Gulch, which is another good hike.) We hiked up Golden Canyon to Red Cathedral, and got this picture looking down the badlands to the valley floor. In the distance, the high, snow-capped mountain is Telescope Peak, the highest point in the park at 11,043 feet high. 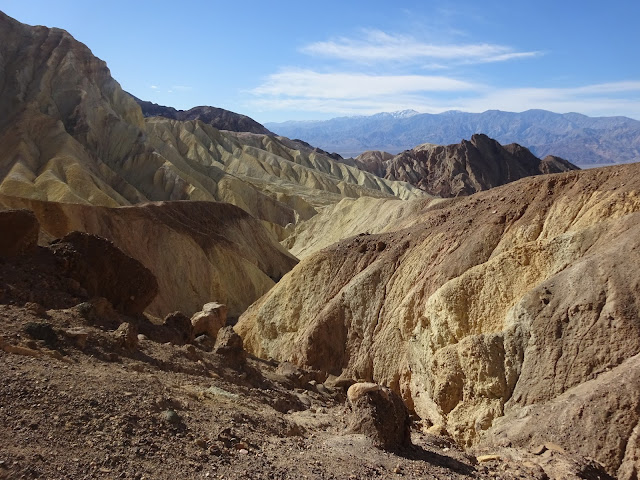 Here is another view of the badlands in this area, from our 2014 visit. This was from one of the hills above Gower Gulch. 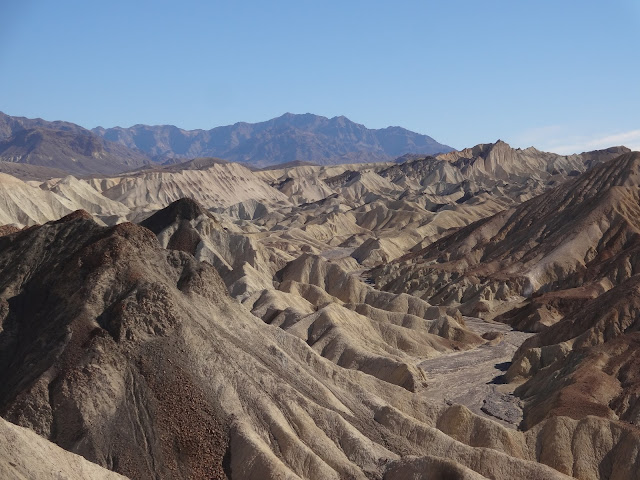 Also from our 2014 visit, here is Telescope Peak from Badwater, the lowest point to the highest, in only 20 miles. 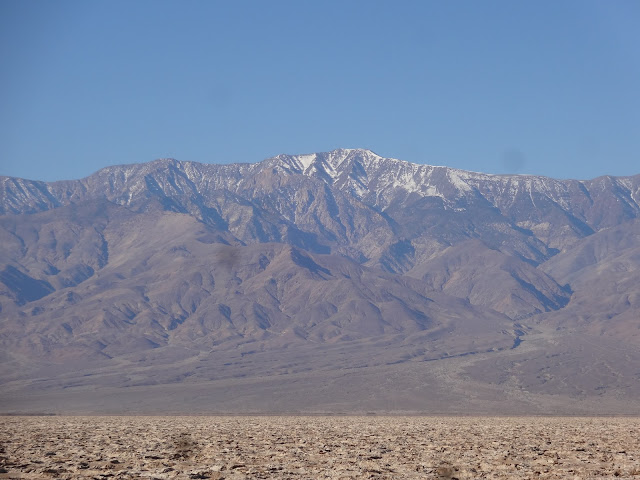 This is Badwater from above. You can drive out to Dante's View, about 6000 feet vertically above Badwater. Not much horizontal distance, however. You could almost jump down from here. 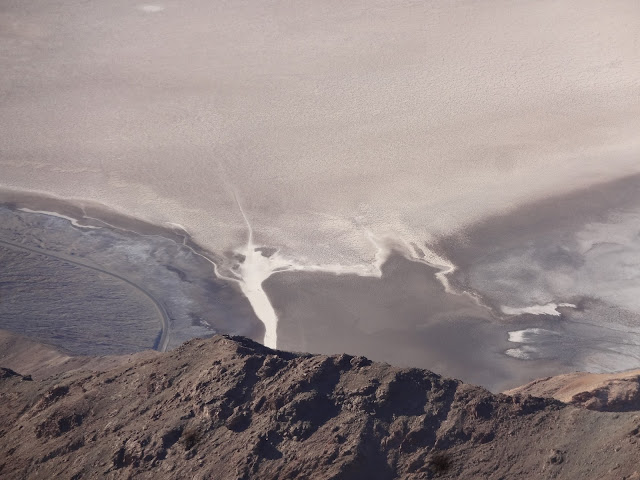 I took this one on our 2014 visit, early in the morning just before the sun rose. This is looking west from Furnace Creek across to the Panamint Mountains, north of Telescope Peak. One of my favorite, despite the dust spots. The curse of a small camera... 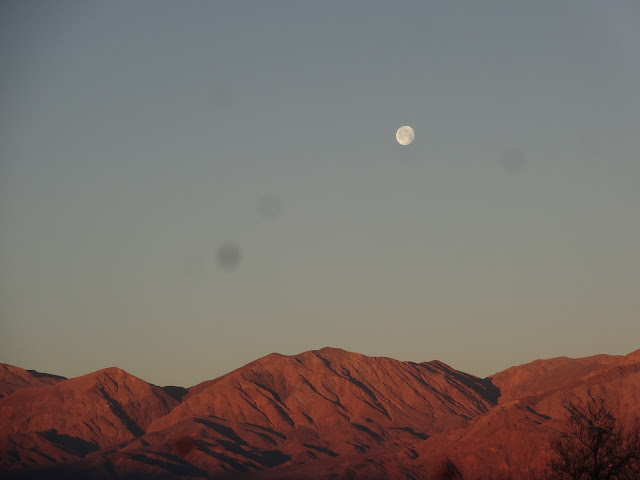 This is part of my ongoing series on the National Park System. You can find the index here.
Posted by Diary of an Autodidact at 8:25 PM