All Quiet On The Western Front by Erich Maria Remarque


This was my selection for Banned Books Week this year. Yeah, I know, this review is a bit late. Unfortunately, the week feel during our Symphony week, so I had zero evening time for reading.


Back in 2012, I wrote about my philosophy of book selection for this week, and why I believe it is important to read banned books. You can find that post here.

Areopagitica by John Milton (2011) (Written in defiance of censorship laws - and thus pre-banned in England)
Uncle Tom's Cabin by Harriet Beecher Stowe (2012) (Banned in the Confederate States)
The Quest for Christa T. by Christa Wolf  (2013) (Banned in the author's native East Germany)
Palace Walk by Naguib Mahfouz (2014) (Banned in most of the Middle East)


All Quiet on the Western Front was banned by the Nazis, which is about as good of a recommendation as a book can have. 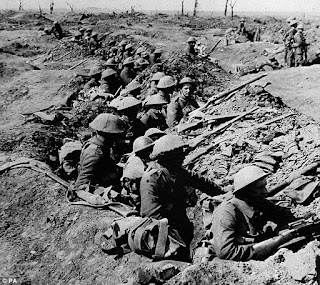 British soldiers in World War One


It isn’t hard to find wars that can only be described as “senseless.” Particularly if you eliminate “greed” and “self-aggrandizement” as legitimate reasons to slaughter others, most wars turn out to have been for bad reasons.


But in the pantheon of utterly senseless, stupid, inane wars, I think World War One has to be in the running for the worst. To imagine a modern parallel, I think it would go like this: French Prime Minister Manuel Valls gets assassinated by an ISIS fighter while on a visit to Lebanon. A few months later, Russia and England are lobbing nukes at each other. (I’m trying not to think too much about this, because it isn’t quite as implausible as I would wish…)


Not only did WWI kill 17 million people, it was probably the single greatest cause of WWII, which killed at least another 50 million. And all because at no point did any of the players hesitate before jumping into total war. As the author of this book points out in a conversation among the soldiers, if even one player had said “no,” the war may have been avoided. And certainly, if twenty or so people had declined, the horror could have been prevented.


Sometimes we Americans tend to believe that anti-war activism and sentiment was a product of the 1960s and the Vietnam war. Maybe that is because we hadn’t had a morally dubious war of our own. After all, the Revolutionary War brought our nation into being, and the small wars of the 1800s were generally provoked by other parties, and thus could be thought of as legitimate self defense. We entered WWI and WWII after being attacked. WWII in particular could be thought of as a just war. Stopping Hitler was pretty clearly a necessary deed by the time we joined in.


Even the Civil War could be looked at as a justified war because the Confederates fired first, and slavery was an evil that the war ended.


But we can easily forget that other nations had already become involved in senseless wars. The prophets of those nations, however, were not yet being heeded, and it would take future generations to tire of the “glory” of war.


One of these early works that illuminated the horror and stupidity of a senseless war was Leo Tolstoy’s short stories about the Crimean War. (Reviewed here.) (Seriously, the only good thing to come out of that war was Florence Nightingale - and neither party learned a darn thing from the horrors of artillery and trench warfare.)

But perhaps the best known early work in this vein is All Quiet on the Western Front by Erich Maria Remarque.


Written in 1929, the book draws on Remarque’s own experience as an 18 year old soldier drafted into the German army during World War One. He was injured by shrapnel, but survived. It was during this war that the term “Shell Shock” was first coined, even though PTSD would not be the subject of serious research until quite a bit later. Remarque clearly understood the psychology, however, in the way that only a survivor and writer can.


The title isn’t a particularly good translation of the original German. Probably better would be “Nothing New on the Western Front.” However, the title has a certain amount of poetry, and has thus been retained by later translators.


Remarque pulls no punches in his brief introduction to the book.


This book is to be neither an accusation nor a confession, and least of all an adventure, for death is not an adventure to those who stand face to face with it. It will try simply to tell of a generation of men who, even though they may have escaped its shells, were destroyed by the war.


There is no doubt why this book was banned by the Nazis: it refused to glorify war or the states that engage in it. Like a later poet would say,


“They're beating plowshares into swords
For this tired old man that we elected king
Armchair warriors often fail
And we've been poisoned by these fairy tales
The lawyers clean up all details
Since daddy had to lie.”


Those who made the decision for war were safely back behind the lines, sending endless waves of young men to die for...what, exactly? The glory of the nation? A few acres of land?


When the narrator returns to his village for a brief leave, the older townsfolk show their cluelessness about the war.


They argue about what we ought to annex. The head-master with the steel watch-chain wants to have at least the whole of Belgium, the coal-areas of France, and a slice of Russia. He produces reasons why we must have them and is quite inflexible until at last the others give in to him.

The details in this book are outstanding - and horrifying. The author is all too familiar with starvation, infestation, disease, and death.


The soldier is on friendlier terms than other men with his stomach and intestines. Three-quarters of his vocabulary is derived from these regions, and they give an intimate flavour to expressions of his greatest joy as well as of his deepest indignation. It is impossible to express oneself in any other way so clearly and pithily. Our families and our teachers will be shocked when we go home, but here it is the universal language.


Killing each separate louse is a tedious business when a man has hundreds. The little beasts are hard and the everlasting cracking with one’s fingernails very soon becomes wearisome. So Tjaden has rigged up the lid of a boot-polish tin with a piece of wire over the lighted stump of a candle. The lice are simply thrown into this little pan. Crack! and they’re done for.


And then, there is way that war dehumanizes.


And when it can’t it breaks, as the narrator discovers when he has to kill a man in hand-to-hand combat.


I am young, I am twenty years old; yet I know nothing of life but despair, death, fear, and fatuous superficiality cast over an abyss of sorrow. I see how peoples are set against one another, and in silence, unknowingly, foolishly, obediently, innocently slay one another. I see that the keenest brains of the world invent weapons and words to make it yet more refined and enduring. And all men of my age, here and over there, throughout the whole world see these things; all my generation is experiencing these things with me. What would our fathers do if we suddenly stood up and came before them and proffered our account? What do they expect of us if a time ever comes when the war is over? Through the years our business has been killing; - it was our first calling in life. Our knowledge of life is limited to death. What will happen afterwards? And what shall come out of us?


That is an important question, and one that the leaders of the world often seem to give too little thought to.


I am not a pacifist. Although, as a descendant (on both sides) of German Mennonites, I certainly have a heritage of pacifism. My ancestors came to the United States as a result of being evicted, first from Germany, then from Russia, as a result of their beliefs. But I am not exactly a pacifist. However, the concept of a just war is important to me. I also think that far fewer wars are “just” than we would like to believe. At some point in this war, both sides (all sides?) were legitimately fighting for their fatherlands. No side was “unjustified” at a certain point. The problem was at the outset, in the decision to make war. And also in the failure to de-escalate before millions were slaughtered. Some wars cannot be avoided. But many can. And many should have been.


I also have a family history regarding World War One. One of the non-Mennonite branches of my family is English. We are actually distant (maybe bastard?) cousins of the famous Wedgwood family in England. (This means that I am probably related to Charles Darwin as well.) Anyway, my great grandfather on that side fought in the trenches in Europe. (I can’t remember if he was an American or a Brit at that time.) He was the victim of a gas attack. While he survived, it destroyed his health, and probably eventually led to his death from lung cancer later. By all accounts, his psyche was damaged as well. He struggled with alcoholism, and even though my grandmother didn’t talk about him much, I have the impression he was violent. It is safe to say that the repercussions of the Great War echo through that branch of our family to this day. Each person has made their own choices, of course, and are responsible for what they did. But it isn’t hard to draw a connecting line.


So, I think Remarque was right. The point isn’t to condemn, but to give reason for pause. War is destructive, not just to those killed, but to those who survive. As such, one should consider if the reward is worth the cost. For the concept of a “just war” to mean anything, it must mean that the evil of war is necessary and the only way to prevent a greater evil.


Reviews that touch on World War One or trench warfare:


I cannot say enough good things about The Better Angels of Our Nature by Steven Pinker. In relation to this review, Pinker details the shift in the view of war from one of Guts ‘n’ Glory to sad necessity. The horror of World War One was a part of that shift.

Also, because it fits:

Posted by Diary of an Autodidact at 2:44 PM