A Hat Full of Sky by Terry Pratchett

Source of Book: Audiobook from the library


This is the second book in Terry Pratchett’s Tiffany Aching series of Discworld novels. The first is The Wee Free Men, which I read a couple of years ago. Earlier this year, I listened to it with the kids, who absolutely loved it. I didn’t write a separate review regarding the kids’ reactions. Suffice it to say that No'-As-Big-As-Medium-Jock-But-Bigger-Than-Wee-Jock-Jock was the most popular character. (And I made dad points by being able to say his name correctly…) Any character that can use terrible poetry as a weapon is alright by me.


This book is a good bit longer than the first one, a fact that became important under the circumstances. We generally listen to audiobooks during vacations, and this was no exception. I had planned a camping trip with about 6 hours worth of driving, and chose this book before I realized it was 9 hours long. In the actual event, a freak thunderstorm caused mudslides, closing both main roads north from Los Angeles, causing traffic to be rerouted on to the roads we wished to use. This meant that it took us 10 hours to get where we were going. The superstitious part of me thinks I need to be careful about choosing books in the future. The optimistic part of me says that it was nice to have a book if we were going to be stuck in traffic. The realistic part of me is irritated that I didn’t follow my first instinct and take the northern route from the first, rather than after finding the southern route jammed. Oh well… 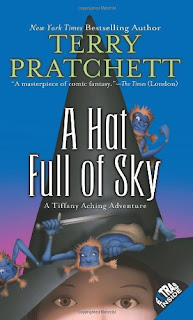 A Hat Full Of Sky picks up the story of Tiffany and the Wee Free Men a couple of years after the first book. Tiffany has been selected to study to become a “real” witch as an apprentice to Miss Level, a peculiar character who inhabits two bodies. Tiffany finds that her training doesn’t consist of much - or really any - “magic,” as she understands it. Rather, she spends her time caring for the needy and milking goats. As Miss Level says, these are the “ordinary things” that witchcraft is mostly about. Not what she had envisioned, exactly, and the fact that she gets airsick on brooms and can’t seem to make a “shamble,” a magical version of cat’s cradle, doesn’t help either.


The point, however, is that Tiffany needs to learn the psychological skills of witchcraft before she can properly use the supernatural skills. Tiffany is surprised to find that Miss Level helps even the undeserving.


“A witch never expects payment and never asks for it and just hopes she never needs to. You can't not help people just because they're stupid or forgetful or unpleasant. Everyone's poor round here. If I don't help them, who will?”


This is familiar to me, of course. I spent the early years of my legal practice at the local Legal Aid non-profit, and I very much spent time helping those who were in some ways “stupid, forgetful, and unpleasant.” My wife the nurse does this even more, and she - like a witch - cannot refuse service to the undeserving.


Later, Mistress Weatherwax, the greatest witch of all, explains to Tiffany:


“[S]he likes people. She cares about 'em. Even the stupid, mean, dribbling ones... who treat her like some kind of servant. Now that's what I call magic... That is the root and heart and soul and centre of witchcraft, that is.”


As a Christian, this concept is recognizable and dear: Grace. Favor and kindness offered where completely undeserved.


It is the same idea, though stated by two very different - and yet alike - authors. Pratchett was not religious, but he had the same irrepressible hope and joie de vivre as Chesterton. And, I might add, the same charity and goodwill toward all that I admire in both.


In this sense, I disagree with those who believe that grace can only be shown by Christians. I have experienced it from those outside the faith as well as those within, and Pratchett’s explanation in this book is as good as I have ever seen it.


The story doesn’t contain just the mundane, however. Tiffany also faces an external enemy. This is a mysterious supernatural entity called a “hiver,” although the book is intentionally unclear as to exactly what it is. It was apparently birthed in the first moments of creation, and is like a disembodied brain, but without the ability to truly think. It takes control of animals and humans, and tries to give them power, but ends up destroying them in the end.


The best explanation of the Hiver, however, may be a psychological one. As the story unfolded, I began to realize that the Hiver in a way serves to feed the Id of the host. The Hiver tries to please its host by granting its subconscious wishes. The wishes are not good for the host, however, which is the main problem. As Tiffany later realizes, the part of her that is still the mere animal - the monkey if you will - wants things that are not good for it. That part of her wants revenge, power, shortcuts, pleasure, and so on. The Id.


At this point, it will take the efforts of the Wee Free Men - who fear nothing - and Mistress Weatherwax to enable Tiffany to throw off the Hiver and regain her human, empathetic self.


In the end, then, both of Tiffany’s challenges turn out to be internal rather than external. She must fight her own worst instincts and tap into her better nature. She must seek and offer grace, rather than mere justice. She must also learn the difference between seeming and actually being.


As usual, Pratchett does what the best “children’s” authors have always done: take important and profound concepts and weave them into compelling tales in ways that let children (and adults) discover the conclusions themselves. A Hat Full of Sky is a compelling story, hard to put down, wonderfully paced, and full of delightful details and jokes and believable characters. And yet, one finds Freud and philosophy at its heart too.


I didn’t discover Pratchett until a few years ago, but I am greatly enjoying catching up. His books make the miles (or at least hours in this case) disappear, and give much food for thought. The fact that my kids love him too is a bonus.


One final bit I must mention. The “mean girl” in this book has a simply perfect name: Annagramma. At least among my nerdy friends, I shall from henceforth use it as shorthand for that sort of girl.


Also, a bit of music. Because.

Posted by Diary of an Autodidact at 10:44 PM