“Kids! Bringing about Armageddon can be dangerous. Do not attempt it in your home.” 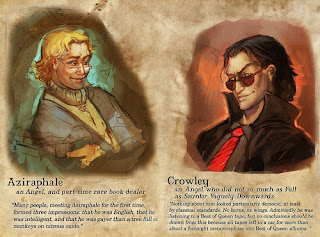 One of Neil Gaiman's Illustrations

Terry Pratchett and Neil Gaiman are not of that ilk.

In fact, it is hard to imagine a more irreverent - and hilarious - take on the End Times™ than Good Omens: The Nice and Accurate Prophecies of Agnes Nutter, Witch. Considering that I loathe Eschatology (the subject of a future post?), this book easily qualifies as the best book about the end times I have read. (And I’ve read more than a few.)

So, the legions of Heaven and Hell are gearing up for the big fight, to determine who is the bigger badass, and thus the Adversary, Destroyer of Kings, Angel of the Bottomless Pit, Great Beast that is called Dragon, Prince of This World, Father of Lies, Spawn of Satan and Lord of Darkness is sent into the world as a baby. When the time comes, he, the Antichrist™ will trigger Armageddon™ and the final battle that will establish bragging rights. Never mind that humanity will be the collateral damage…

The problems start, however, the way they often do: simple incompetence. Crowley (formerly Crawly, the demon who got the task of being the serpent in the Garden of Eden), gets delayed in his delivery of the infant, and is unable to supervise the switch with another infant. The nurse is a scatterbrain, and fails to get the right baby to the right parents.

As a result, the Antichrist grows up as Adam Young, a country boy with no knowledge of his powers or destiny. As a result, he fails to become evil, rather retaining an ordinary human capacity for both good and evil as a result of his free will.

Meanwhile, a thoroughly ordinary boy becomes Warlock, the son of an American diplomat (one of many jokes at the expense of us Americans). Lacking the natural powers of the Spawn of Satan, he fails to show the expected development, causing the powers of Evil to eventually realize that a mistake has been made.

Compounding the problem is the simple fact that Crowley would rather not see the world end. He likes his vintage Bentley and his lavish lifestyle. He’d just as soon keep on living in the world as it is. At least as long as he doesn’t have to go back to the hellish 14th Century.

Crowley has a counterpart too, the angel Aziraphale (the one with the flaming sword at the East Gate of Eden), who shares a desire to avoid the end of the world. He has, after all, a used book store which is a cover for what he is really doing - which is collecting rare books. He would prefer to listen to classical music and enjoy the connoisseur's life.

The two of them, naturally, become friends. And why not? In their own way, they are both working toward the same celestial goal, the “ineffable plan,” as the term in the book is. If God has already laid out the whole of history, then neither is blameworthy in carrying it out, right?

But what about their desire to stop the Apocalypse? Is that even possible? Humans have free will, and thus can choose how to act. (Presumably the authors are not Calvinists…) Angels and demons, on the other hand, have in theory no free will. Demons are compelled by nature to be evil - that is, rebel. But can one rebel against rebellion? Hmm. Good question, and one that Crowley and Aziraphale try to answer.

So much for the supernatural side of things. On the human side, there is Anathema Device, a youngish woman directly descended from Agnes Nutter, a witch of the 17th Century, who was burned at the stake (because that’s what they did back then…), but not before leaving behind a book of cryptic and specific (that is, “nice” in its original meaning) prophesies. They were not, unlike Nostradamus’, popular. However, unlike his and everyone else’s, hers happen to be true. The problem is that they mostly were about her descendents, and were nearly impossible to interpret, except in retrospect. She ends up accidentally (literally) meeting up with Newton Pulsifer, a descendent of the witch hunter who burned Agnes at the stake. Newton is also the world’s most inept electronics buff, a fact which becomes important as the story unfolds. And then there is Adam and his gang of friends: Brian, Wensleydale, and “Pepper,” a girl who resembles a couple of my own for spunk.

I won’t spoil the plot, which unfolds in an increasingly bizarre yet startlingly apropos way. Pratchett in particular (I haven’t read any other Gaiman) has a fascination with free will, the effect of choices, and the nature of good and evil. Along the way, the authors poke good-natured fun at a variety of worthy targets.

Trendy diet foods, which have no discernable nutrition or calories, and if eaten long enough will lead to death by starvation. While making the sellers rich.

R. P. Tyler was not, however, satisfied simply with being vouchsafed the difference between right and wrong. He felt it his bounden duty to tell the world.

Televangelists. Including one who wrote the following inspired bit of schlock music:

Jesus won't cut you off before you're through
With him you won't never get a crossed line,
And when your bill comes it'll all be properly itemised
He's the telephone repairman on the switchboard of my life.

The phone line to the saviour's always free of interference
He's in at any hour, day or night
And when you call J-E-S-U-S you always call toll-free
He's the telephone repairman on the switchboard of my life.

End-Times fascination in general. This one is far overdue and ripe for some satire. The whole “Left Behind” series is a monument to the gullibility, commercialism, and poor taste of a huge portion of American Christianity. Perhaps because they are Brits, Pratchett and Gaiman zero in on the most ludicrous features of the “rapture” enthusiasts in a thoroughly entertaining manner. (Again, I want to blog on this in the future.)

Crowley had been extremely impressed with the warranties offered by the computer industry, and had in fact sent a bundle Below to the department that drew up the Immortal Soul agreements, with a yellow memo form attached just saying: "Learn, guys."

"Surely you have considered terrorist activity?"

There was another pause. Then the spokesman said, in the quiet tones of someone who has had enough and who is going to quit after this and raise chickens somewhere, "Yes, I suppose we must. All we need to do is find some terrorists who are capable of taking an entire nuclear reactor out of its can while it's running and without anyone noticing. It weighs about a thousand tons and is forty feet high. So they'll be quite strong terrorists. Perhaps you'd like to ring them up, sir, and ask them questions in that supercilious, accusatory way of yours."

And there is more. Gaiman and Pratchett are nothing, if not witty in the extreme. My wife and I ended up snickering and giving each other meaningful glances throughout. There were two minor issues that I had with the book. The first is due to the very nature of co-writing. While the plot holds together pretty well, there are some bits that don’t flow together, and it becomes obvious that different authors with slightly different visions wrote the corresponding sections. As I said, a very minor quibble, because even with this, the book is well written and well plotted. The second applies to the audiobook only. Narrator Martin Jarvis does a great job, but the mastering on the recording shows a bit greater dynamic spread than I would have preferred. It would have been fine listening to it in a quiet room, but in a car at highway speeds, the difference between loud and soft portions was a bit too much. Either we had difficulty hearing the soft voices, or we got blasted out by a couple of the louder characters. Again, a minor thing. I would have preferred just a little more compression from the audio engineer.

Just a few more quotes, because I can’t resist:

It wasn't a dark and stormy night. It should have been, but there's the weather for you. For every mad scientist who's had a convenient thunderstorm just on the night his Great Work is complete and lying on the slab, there have been dozens who've sat around aimlessly under the peaceful stars while Igor clocks up the overtime.

A conversation between Death, a recurring character in Pratchett’s Discworld:

"You're Hells Angels, then? What chapter are you from?"

War (a female war correspondent) on the depressingly mundane job of setting off nuclear war:

"This isn't how I imagined it, chaps," said War. "I haven't been waiting for thousands of years just to fiddle around with bits of wire. It's not what you'd call dramatic. Albrecht Dürer didn't waste his time doing woodcuts of the Four Button-Pressers of the Apocalypse, I do know that."

And, on that note: 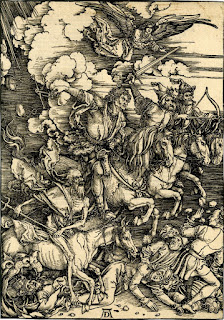 Albrecht Dürer, The Four Horsemen of the Apocalypse 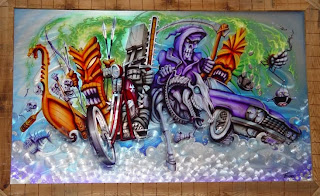 Craig Fraser, The Horsemen of the Tiki Apocalypse

Other Pratchett reviews on this blog:

Posted by Diary of an Autodidact at 4:48 PM