While audiobooks are usually a staple of our vacations, I didn’t listen to quite as many this time. The primary issue was that our anticipated Wodehouse book had too many scratches to play, so we were not able to hear that one. A sad experience indeed.

However, we were able to listen to Dodger, by an author who is quickly becoming a favorite of my older children. (Well, me too!) 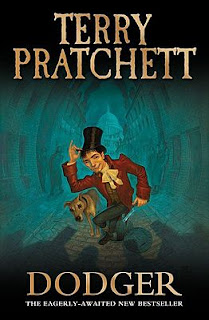 Dodger isn’t part of the Discworld series, but instead is a “Historical Fantasy” set in London in the early years of Queen Victoria’s reign. The title character is a clear nod to The Artful Dodger of Dickens’ Oliver Twist, and numerous historical and literary characters make their appearance in the course of the book.

The plot is set in motion when Dodger, a “tosher” (one who seeks treasures in the sewer) and pickpocket, hears the cries of a woman in distress, and he rescues her from a couple of thugs. The commotion also draws the attention of two gentlemen, Charlie Dickens (the historical novelist) and Henry Mayhew another historical figure. (Mayhew was a friend of Dickens, a co-founder of Punch, and the author of London Labour and the London Poor; which would be as influential in fomenting social reform as Dickens’ novels.

The mysterious lady, known as “Simplicity,” is reluctant to reveal her true identity, which turns out to have serious implications in international politics. I won’t ruin a delightful plot any further except to say that there are people who want “Simplicity” very much dead, and Dodger finds himself caught up in the intrigue and thus becomes a target himself.

Pratchett fills the book with a plethora of real historical figures, although he takes some liberty in the chronology to get them all in the same place at the same time.

Dickens is a major character, as is Mayhew. Benjamin Disraeli, the future Prime Minister, also plays an interesting part. Dodger recognizes him as a fellow “dodger,” and notes the similarities between the prevarications of politics and the necessities of survival in the underworld.

Another fascinating - and real - character is Angela Burdett-Coutts, a wealthy philanthropist. Pratchett said that one of the reasons he wrote Dodger was to bring her to the attention of modern readers. And really, read about all the stuff she did. What an incredible woman!  In many ways, she was ahead of her times, both in her feminism, and in her sensitivity to modern concerns about racism and colonialism.

Readers will also notice the presence of Robert Peel, founder of the modern police force; John Tenniel, illustrator of many works, but best known for the original Alice In Wonderland; and Joseph Bazalgette, who would go on to engineer one of the greatest accomplishments of the modern world: the upgraded London sewer system, which would eradicate cholera from London and set the pattern for most of the sewer systems in use today. That’s a pretty good list of Nineteenth Century English rock stars.

In addition to these real characters, there are a host of fictional ones that are a nod to Oliver Twist and other Dickens novels. Chief among these is Solomon Cohen, kind of a “Good Twin” to the Fagin of Dickens’ book. Solomon shares lodging with Dodger, and is a kind of mentor to him, as well as serving as the voice of Pratchett himself occasionally. Many of the best lines go to Solomon, particularly as he philosophises about religion.

In one scene, Solomon describes his “complicated” relationship with God. After being the victim of a pogrom, Solomon escapes continental Europe, but without his faith. He informs God that he doesn’t believe in him any more. “What did God say?” asks Dodger. “He said to get back to Him when I change my mind.” So this kinda-sorta faith permeates Solomon’s existence. And it leads to some interesting decisions. For example, Solomon decides that he will eat pork. Why? He figures that God will understand that he is an old man and very hungry, and will forgive him for accepting whatever meat he can obtain rather than starving. And so it goes for a variety of ceremonial concerns. Solomon must live, and he figures God will understand.

Sweeney Todd also plays a pretty significant role in the book, although his personal appearance is fairly short.

Pratchett portrays the London of 175 years ago in a realistic and gritty manner. Piss and shite (he uses those words) are everywhere, as are death, disease, pregnancy, prostitution, and suicide. He doesn’t shy away from any of these, but put the reality out there. However, Pratchett was such an optimist that he couldn’t write a truly dark book if he tried. Amid all the horrid realities, there is such a ebullient air that you cannot but feel as if it will all come out right in the end, in some way.

This is really a microcosm of Pratchett’s very existence. He, sadly, passed away a few months ago, the victim of an early form of brain disease. And yet, all the while, he was ever positive and pragmatic and full of life while knowing he was likely dying. In the midst of the unsolvable and unanswerable, he still went about shining his light as he knew best. And thus, both Solomon and Dodger are him. Despite all that happens, and all the injustice in the world, they both keep on doing what they do best, trying to survive and even thrive in their own way, not complaining, but just living.

Like Dickens, Pratchett exposes the dark underside of Victorian society, which let far too many fall between the cracks. However, while Dickens dealt with an ongoing reality, Pratchett illuminates a past which is, thankfully, a past, and not a present, at least in the Western world. Still, many of the issues remain at some level. How do we deal with an economy in which honest work is often ill-compensated and unhealthy to the point that some elect to live on the wrong side of the law? How can we assist victims of domestic violence to escape? How do we address the difference in life expectancy between the rich and the poor? Does the “good of society” justify the sacrifice of individuals?

As usual, Pratchett’s writing is both entertaining and thoughtful. My two older daughters absolutely loved this book. We didn’t quite finish it by the end of our trip, so they stayed up with me a couple of nights so we could get to the end. We also had some fun discussions about the history and the philosophy as we went along. Pratchett also gets bonus points for writing interesting and complex female characters. While his early work, The Carpet People lacked them, he eventually began to work women and girls into his books, even using a female as a memorable protagonist in a number of his Discworld books. I look forward to reading or listening to more of his books with my kids.

Posted by Diary of an Autodidact at 11:18 PM