The Prisoner of Zenda by Anthony Hope

Source of book: I own this as part of my hardback “World’s Best Reading” collection


Buckle your swashes! Time for a rip-roaring adventure story! 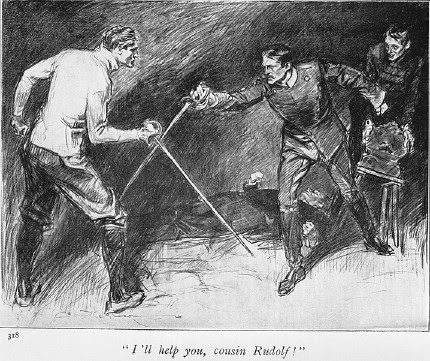 
Anthony Hope wrote a few books, but none was more popular than The Prisoner of Zenda, although the sequel, Rupert of Hentzau came close. Written at the close of the 19th Century, it started a revival of the tale of sword and chivalry, practically creating the “Ruritanian Romance” genre.


In order to make the anachronistic tale more believable, Hope set it primarily in an imaginary Central or Eastern European country he called Ruritania. For the 1890s, this area of the world was barely less exotic than the Persia of the Arabian Nights or the Far East. It was still believable as the half-savage, backward, forested wilderness in which a sword fight in a castle was entirely possible. Even Count Dracula was possible, and children could be stolen away and turn up in Transylvania. I’m not sure the Romanians entirely appreciated this stereotyping. Perhaps these days, one of the few places that would still work for this sort of thing is North Korea.


In any case, “Ruritania” becomes the setting for this tale. Englishman Rudolf Rassendyll is a rather unmotivated and silly young aristocrat somewhat in the vein of Bertie Wooster. Either blessed or cursed with flaming red hair, he is the living reminder of the checkered past of his family. A few generations back, a torrid affair took place between a respectable matron of the family and the rakish prince of Ruritania, and the red hair crops up once each generation as a reminder of the incident.


Pestered to do something useful with himself, Rudolf takes a trip to Ruritania on the pretence of going to Italy to research a book. He accidentally runs into the heir apparent to the throne, who happens to be his doppelganger. After the king is drugged and abducted by his brother - who also wants the throne - Rudolf finds himself impersonating the king, so he can free him from the dungeon at Zenda. This wasn’t exactly his plan for his vacation, but, after all, why ever not?


Hope realizes that this story is a bit silly, and doesn’t take it entirely seriously. For both Rudolf and the author, this is a fortunate lark, a chance to show their mettle while indulging in a fantasy. Hope writes in a flowing, well paced manner, allowing the story to unfold at a perfect pace.


The Prisoner of Zenda would prove to be influential. While some authors would lean more to the serious side, the best and most memorable of the subsequent Ruritanian Romances would mine the concept for its comic potential. The Adventures of Tintin draw significantly from Zenda, both in idea and in plot devices. Both Charlie Chaplin and the Marx Brothers (Duck Soup) would utilize the concept to comedic effect. George Bernard Shaw parodied the genre in Arms and the Man. Ian Flemming’s Chitty Chitty Bang Bang invents perhaps the best “Ruritania” of them all, the kingdom of Vulgaria. Even recently, Grand Budapest Hotel draws from the tradition.


The Prisoner of Zenda is great fun, and a nice light read. I also intend to introduce my children to it at some point. Perhaps I can find an audiobook for one of our adventures this summer.


What is a “swash,” and how do you buckle it anyway?


“Swashbuckler” is similar to “gunslinger,” but the meaning isn’t quite as obvious. The derivation comes from the sound the sword makes through the air, and a buckler is a round shield. (And also one of the great naughty jokes in Shakespeare’s Much Ado About Nothing.) A swashbuckler is the sort who prefers a sword to a gun, is as idealistic as they come, and rescues the damsel in distress. Obviously, Robin Hood and the Three Musketeers qualify, along with any number of movie heroes of the past. Nearly every book by Sir Walter Scott [insert link] contains this archetype, and many adventure stories and movies have had to choose whether to embrace or parody the trope. The eminently quotable The Princess Bride encompasses both, with the quintessential swashbuckler Inigo Montoya contrasted with the cynical but resourceful Westley. Even the Star Wars franchise capitalizes on the enduring love for swordplay and the wistful desire that it could in fact still trump the far less romantic firearm.


This was a term I had to look up after it appeared in the book. A Morganatic marriage is one between a member of the nobility and a commoner. (In fact, the marriage of Prince William to Kate is technically Morganatic, which makes it a big deal for those who care about such things.) The legal question to be settled is one of inheritance. Obviously, the commoner spouse cannot inherit the family estate, but what of the children? Do they inherit the titles and property? As I presume any British barrister could tell you, “it’s complicated.” Morganatic marriage doesn’t drive the plot in this book, but it does at least come into play in the back story of a few minor characters.


Hope co-wrote a stage version of the novel soon after it was published.


Naturally, a plot this good has been turned into a movie on several occasions. Early films were made in 1913, 1915, and 1922. The definitive version is the 1937 film starring Douglas Fairbanks as the dastardly yet dashing Rupert Hentzau, and Ronald Colman as Rudolf and the king. The same script would be used for the 1952 remake starring Stewart Granger and Deborah Kerr. A very loose adaptation was made for a 1979 film starring Peter Sellers.

Trailer for the 1937 version

Posted by Diary of an Autodidact at 5:53 PM