One of our family’s favorite vacation destinations is San Diego. Blessed with the world’s most perfect climate (I kid you not - it’s nearly always between 60 and 75 degrees) plenty of kid-friendly activities, and an abundance of interesting and tasty food, it is only four hours from us. If it weren’t for the traffic and the high cost of housing, I might consider moving there.

So, we were down there, hanging at Balboa Park with my wife’s cousin and her kids, when we decided to take a stroll around the place for fun and to kill some time until dinner. We were unsurprised to see a crowd of kids and parents around the Globe Theater, because they usually do The Grinch in November and December. However, Amanda noticed that the smaller venue was doing Pericles, Prince of Tyre, one of Shakespeare’s more obscure plays. Also, that that night was the last night, and that if we grabbed a quick dinner, we could fit it in. After all, when would we have a chance to see Pericles again? Who does it anymore?

And that is how one finds one’s self on a Sunday evening attending a Shakespeare play with five children on the spur of the moment.

This isn’t the first rodeo for the kids, as I noted in my previous Shakespeare review for this year. Fortunately, my littlest kept it together. The others, as usual, were enthraled. 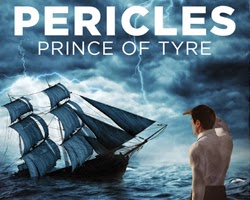 The poster art for this production of Pericles

The performance took place in a small “theater in the round,” which meant that we could easily see and hear everything even from the “back” row (of 5 total rows). Even better for my older son, the lighting rigs were visible. He was thoroughly fascinated by the lighting choreography - including the storm.

Pericles is believed to have been written only in part by The Bard. Parts of it seem lesser in quality and language, and the whole has a certain slapped-together feel. Some of Shakespeare’s contemporaries mocked it as fluff, but it has gained in reputation in later years. It isn’t up to the very best of Shakespeare, but it has its moments. In some ways, it is possible to see the foreshadowings of later themes. For example, the reconciliation scene in A Winter’s Tale closely parallels this one, although I am inclined to think that Pericles handles it in a more believeable way. (On the other hand, Pericles doesn’t have an “exit, pursued by a bear” moment…)

It is easy to see why the play was popular with audiences. The plot is easy to follow, a bit melodramatic, and karma wins out in the end. (I don’t recall any other Shakespeare play in which a bad guy got a divine smiting - but that was the part probably written by another author.) The fourth act is pretty bawdy. Not that Shakespeare isn’t this way plenty often in other plays or anything. Measure for Measure likewise illustrates his ability to use the bawdy-house mistress for sharp-tongued humor. For all the low-brow humor, the act does touch a good bit on consent and virtue. In some ways, this section is the most psychologically compelling portion of the play.

The staging of this play was interesting. Like a classical play, there is a role for a narrator or chorus in linking the scenes. Shakespeare would use the same voicing for the opening of Henry V, but he uses it throughout Pericles. In this version, the set is an archeological dig. The workers are about to stop for the night, when the narrator appears, and leads them through a reenactment of the story. At crucial junctures, she provides the props they will need. A crown and robe for Pericles, fishing equipment for the fishermen, new characters as they appear. The plastic shrouds covering the work likewise become part of the set, hiding new characters until they appear, functioning as tables, sails, and whatever else is needed. Throughout the play, they are removed, layer by layer, as the layers of Pericles’ psyche are removed and revealed through his misfortunes. At the end, all that remains is the bare rock and the intricate floor revealed by the excavations, and all that has gone before becomes the memory discovered by the archeologists. I thought it was a creative way of approaching the story, requiring no additional dialogue or explanation, but created through the action and the simple and flexible set.

I should also mention the, um, distinctive use of coconuts during the jousting scene.

It turned out to be a thoroughly enjoyable evening, despite the last minute planning. (Spontaneity is not my strongest feature, shall we say. I like to plan stuff, though, so if you want the boring but crucial details of something right, let me plan it.) I’m thrilled that we were able to make it work, because of the rarity of the play. This is the first year since B.C. (before children) that we have been able to do stuff like this without a babysitter, and I must admit it is nice. So that is my Pericles story...

Posted by Diary of an Autodidact at 9:10 PM