I will admit that it is with some trepidation that I post this column. My views on this topic are different from those of many of my friends and family, and I will doubtlessly offend some of them. As regular readers of my blog know, my wife spent a portion of her teen years in Jonathan Lindvall’s home church, which is heavily into the various elements of Christian Patriarchy, including modesty culture. While there, she was targeted as the brazen hussy out to destroy the virtue of the young men. Neither of us has had a positive experience with the movement or with the “modesty” component. There is a lot of lingering hurt for both of us. So I admit I am not capable of writing an unbiased view.

A friend and fellow survivor of the Patriarchy movement urged me to write this post, and several recent national news stories revealed just how pervasive this damaging doctrine has become in Evangelical circles. The final straw was probably the string of conservative Evangelical colleges (Patrick Henry College, Bob Jones University, and Pensacola Christian College) who botched their response to incidents of sexual assault.

I also should note that very little in this post is original. I am deeply indebted to a large number of fellow bloggers for their insight into this issue. I wasn't planning on writing my own post, or I would have taken notes. I will attempt to link the best of them at the end of each post, but for those I missed, I apologize. If you notice an omission, let me know and I will make the correction.


I also want to mention that I have had had to do plenty of serious, concrete thinking about this, as I have three daughters of my own, the oldest of which is nearing puberty. Thus, my concerns are real-life, and not just theoretical.


After several comments that some of my posts get into the “paperweight” category of length, I decided to break this one up and release it in installments. As of today, I have roughly 20,000 words committed to "paper," and there are more to come. I will post further installments as I get time to write and edit.


Back in December of 2012, an Iowa Supreme Court decision on employment law hit the news wire, and immediately caused a huge stir.


A female dental assistant was fired after ten years of employment by her male employer. The reason for the termination? The married 32-year-old mother was seen as “too attractive,” and “irresistible;” and in fact, the dentist claimed that if he did not fire her, he would end up having an affair with her.


After the termination, she sued on the basis of gender discrimination; that is, that she was fired for an issue that only affects females. The all-male Iowa Supreme Court disagreed, and held that she could be fired for that reason. (I do not practice employment law, and am not licensed to practice in Iowa. I would make an educated guess that the result would have been different in California, however.)


Leaving aside the legal issues, the moral issues here are interesting.


First, the dentist’s actions (commenting on her clothing, drawing attention to his erection, asking how often she orgasmed) would constitute sexual harassment in most states, including my home state of California. At minimum, they are disgusting, inappropriate actions.


Second, there was no evidence in the case that she reciprocated his feelings. In other words, the risk does not seem to have been so much that he would have an affair with her - she didn’t want one - but that he would be overcome by her attractiveness and unable to control himself. By raping her? His position isn’t really clear.


Third, and this one was what shocked me, whose idea was it to fire the woman? The dentist’s pastor. That’s right. It was the “man of God” who decided that the cure for a man’s creepy behavior and inability to control himself was that a woman should lose her job. Yes, a woman who made far less income than the dentist, and probably relied on her income to support her family, had to suffer because of the more wealthy and powerful male’s sexual problems.


And yet again, the cause of Christ takes another rotten tomato. I noted in a previous blog post that I have discovered that one of the reasons many people wish to have nothing to do with Christianity is that they find us to be immoral.


Guess what? This is another of those cases.


How did we get to this point? Before I go on, let me tell you a little bit about my professional experience.


One of the “fun” things about being a lawyer and knowing a lot of people from ultra-conservative, patriarchal groups is that you tend to get the call when things go wrong, legally speaking. My father-in-law as well as myself have seen numerous cases involving adults and teens within the movement who have engaged in acts that are defined by the Penal Code of the State of California as sexual assault. That is about as accurate a description as I can find: criminal sexual assault. And the percentages seemed far too high to be normal. It became clear to me that something was going wrong in the psyches of the men within this movement.


What I have found particularly disturbing is that in the cases that I have had involving young teens, I have heard a common refrain:


“I thought about doing it, and lusting is the same as doing it.”


Since I was raised with this philosophy, I am thoroughly familiar with the thought process. I hope to illuminate how it has poisoned our young men and young women alike as I go along.


I mentioned the Patrick Henry College connection at the beginning. A recent article in the New Republic brought to light several uncomfortable problems. First is that PHC doesn’t appear to have any protocol for dealing with allegations of sexual assault or harassment. Second, is that when complaints were made, the first response appears to have been to blame the victim and to ask whether she was wearing something “immodest.” The same basic facts apply as well to the ongoing scandals at BJU and PCC. The issue of consent seems to be blurred, and there is a strong bias to blame the woman - and focus on her clothing. I’ll be talking about this in more detail later, because the link between Modesty Culture and Rape Culture is strong and possibly intentional.


Something has gone badly wrong when we accept that a woman must lose her job because a man can’t control his desires, and when we can’t think clearly on the issue of consent. Again, how did we get here?


I’ll be attempting to answer that question in the next installment.


Posts in this series:


Note on an abbreviation:


Throughout the course of writing this, I have been strongly tempted to, as Spock would put it, use “colorful metaphors.” Liberally and with great frequency. For the most part, I have tried to avoid it, both because it may be a distraction and because I am lousy at swearing.


The most common thing I would like to say repeatedly is WTF? Because so much of what is said is really that bat-shit insane. However, I decided to go with a more gentle approach, and use the words of Jerry the Minion, from Despicable Me: 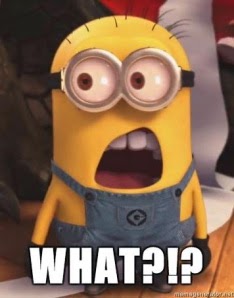 
This is an excellent article on the topic of abuse and the way that fundamentalist organizations fail to address it.

Posted by Diary of an Autodidact at 8:44 PM