Around the World in 80 Days by Jules Verne

Source of book: We listened to this on audiobook - but I also own a hardback.

As my kids have gotten older, we have taken to listening to audiobooks on our longer vacation drives. I haven’t written about most of them, but I did mention Thank You, Jeeves, which we listened to about a year ago.

(For the record, my kids are particularly fond of everything Beverly Cleary. We have also listened to the delightfully subversive Matilda by Roald Dahl, and a couple of the Mrs. Pigglewiggle books.)

This time, my wife selected Jules Verne for the long book for the drive. I discovered Verne early in life, and had read this and most of his easily available books before the end of high school. I discussed the one I missed until later, The Mysterious Island, here.

This particular book may well be Verne’s most popular, although 20,000 Leagues Under the Sea is still widely known, if not necessarily read. Most people, if they were honest, would probably admit that they saw the Disney movie, and left it at that.

Which is really too bad. Part of the fun of Jules Verne is reading how he tries to describe technology using 19th Century language. Particularly since he is describing stuff that hasn’t been invented - but turns out to be very close to how he describes it.

In some ways, Around the World in 80 Days is less of a Science Fiction novel than a straight up adventure. There was nothing futuristic about steam ships or railroads when he wrote it. There were several recent developments which made the idea possible, not the least of which was the completion of the Transcontinental Railroad in the United States. On the other hand, Verne explores another intriguing idea, even if it is merely implicit. Phileas Fogg is a representative of a recurring type in Verne’s novels: the man of science, completely objective, and devoid of the bias of emotion. (At least on the surface.) Perhaps he might be looked on as a proto-Spock.

Since the plot is reasonably well known, I won’t summarize it. If you aren’t familiar with it, please don’t go rent a movie version. Find the book! It is a rip roaring yarn, full of twists and turns, and full of imagination.

A few things particularly struck me this time through.

First, by coincidence, we came to the part where the adventurers are riding the Transcontinental Railroad over the Sierra Nevada mountains of California just as we were making the descent from Truckee to Reno. We could see the actual tracks they would have traveled from our car. Pretty cool. Although Verne only visited the United States once, and never traveled west of Niagara Falls, he accurately described the route. (It is also interesting that the United States is a common setting of many of his books.) 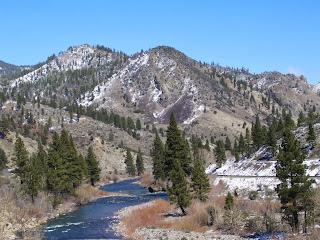 The Railroad near the California and Nevada state line, by the Truckee River.

Second, Verne’s stereotypes of the English and the Americans are pretty funny. Verne, of course, was French, like Fogg’s servant, Passepartout, from whose point of view the story is essentially told. There are several Englishmen in the story. Fogg, of course, who represents the punctual, exact, emotionless idea of the stoic Englishman. Fix, the dogged British detective. The Colonel stationed in India. These are well known stereotypes, of course.

The American ones are more outlandish, from the description of the election brawl to the hothead that is determined to duel Fogg, to the painful (if common for the time) portrayal of Native Americans as stupid savages.

The final one I must admit truly surprised me. When I last read this, I was pretty young, and wasn’t equipped to notice when authors defied the taboos of their time.

Verne almost completely avoided writing female characters. Most of his books are completely devoid of them. However, in this one book, he creates one, and she is more memorable than I recalled.

For those who haven’t read the book, Fogg and Passepartout, with the help of their military acquaintance, rescue a beautiful young Indian woman as she is about to be burned to death in her husband’s funeral pyre. So far, so good. A damsel in distress, rescued by strong and noble men.

It is later in the story that things get more interesting. Aouda may be a beautiful and “exotic” woman, but she is no shrinking violet. During the rough weather at sea, it is she, and not the violently ill Fix who remains on deck. She is soon calculating schedules and assisting in keeping things moving alongside Passepartout. Considering when this was written, this was already pushing the boundary a bit. 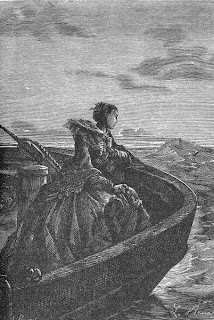 It is after that Verne goes beyond the standard Victorian plot. A couple of decades after Around the World In 80 Days was written, the English novelist, H. Rider Haggard (the inspiration in large part for the Indiana Jones books) also wrote of “exotic” and powerful women. The demi-goddess-like Ayesha is one, but Foulata (from King Solomon’s Mines) more closely resembles Aouda. Haggard, though he writes of these possible interracial romances, he chickens out at the last, and kills off the women before crossing that line.

Verne has no such hangups. [Spoiler alert] Not only do Fogg and Aouda get married, she proposes to him! Such French scandalousness, I suppose. The timing is interesting too. She proposes when both of them believe he has lost his bet and therefore his fortune. When it is discovered that he has actually won, and therefore isn’t penniless, she offers to release him from his promise. Rather than think (as most in that time would) that he would be lowering himself by marrying her, he remains smitten (as does she), and by all accounts it is a happy match.

I highly recommend Verne’s novels. This one is a good place to start, but I do encourage that one read the others as well.

Despite the fact that the book started a little slowly, my kids really got into the story. The back seats were, shall we say, very quiet, for hours during the trip. My eldest daughter said she was surprised that they got married in the end. All of them found Passepartout’s endearing foibles to be amusing. So read Verne to your kids as well.
Posted by Diary of an Autodidact at 10:37 PM