My Review of Outliers, by Malcolm Gladwell
Date originally posted on Facebook: November 14, 2010

I am re-posting my earlier Facebook reviews to my blog. Malcolm Gladwell is one of my favorite modern non-fiction authors. I reviewed Blink here. 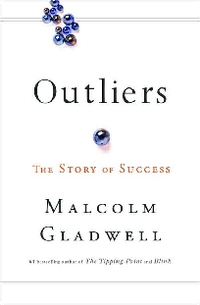 My (subjective) view of the theme of this book is “how circumstances contribute to success). Gladwell starts by looking at what he calls “outliers” – those who achieve success beyond those around them. In the common Horatio Alger-inspired myth, those that achieve success do so solely because of their efforts. Their superhuman dedication, hard work, and determination. Gladwell looks beyond the myth and examines the circumstances that contributed to success.

I would consider Gladwell to be a “popular sociology” writer. He is not a researcher, and he deals in anecdotes more than statistics. However, he writes well about what he examines – those events and occurrences which are more profitably examined through the lens of common sense than that of minute analysis. This is not to say that Gladwell doesn’t cite the research behind his stories – he does.

I took a particular interest in the book because of his opening chapter. Gladwell examined the most successful Canadian hockey prospects to search for factors in their success. What he found by a quick examination of basic statistical information confirms my own experience: Date of birth is the single most important factor in determining success at hockey. For that matter, date of birth is significant in all sports due to the age cut off. Simply stated, those born immediately after the cut off date were almost a year older than those born right before. This meant that those who were older had an instant advantage over the others, and were therefore identified and trained as promising prospects.

This rang true for me. I was born in August. In my kindergarten, I was therefore one of the youngest children. Partially because of this, I was the shortest kid in my class. By a lot.

Fortunately for me, I was also fairly mentally advanced for my age, so I was not behind academically. However, I was the proverbial “last kid chosen” in every sport.

As Gladwell points out, for kids who are younger than their classmates, this often means that they are (wrongly) identified as less intelligent.

From this start, Gladwell looks at such diverse success stories as Bill Gates, Jewish lawyers, and himself (with Caribbean ancestry).

I also particularly enjoyed his chapter on airline disasters. (My father was an air traffic controller, so I am far too interested in all things airplane related). He brought out how culture affected several notable disasters, leading to errors of communication.

While much of the book made sense and expanded the way I thought, I was a bit disappointed with the ending. Gladwell makes an attempt to extrapolate his theory to find an immediate practical application. I suspect that this is a common tendency: to take what otherwise might be simply an interesting observation and make into a proposal for public policy. By taking a single example, Gladwell seems to be proposing that inner city children need to be immersed in a 16 hour per day academic program in order to succeed. While the example given is interesting, I find it a bit much to pick this one example as a template for all success.

Gladwell is strongest when he tells stories. Anyone who can make mergers and acquisitions sound interesting to non-lawyers must have talent. In my biased opinion, Gladwell would have written a stronger argument had he assumed a more intelligent reader: one who could take the information and drawn his or her own conclusion with less leading.

That said, I enjoyed Outliers and recommend it to anyone who thinks they understand success. I also should make a plug for Gladwell’s New Yorker articles on various topics. Gladwell is on my short list of writers who I will read even if the topic isn’t something I would ordinarily read.
Posted by Diary of an Autodidact at 8:46 PM