I Am Half-sick of Shadows by Alan Bradley

Source of book: Borrowed from my wife, who introduced me to the Flavia books. 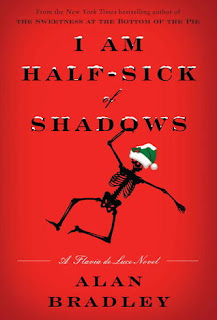 I have previously written about the earlier books in this series:

Those new to Flavia should start at the beginning, as the later books assume knowledge of the persons and events of the previous books.

I remain impressed with the fact that Bradley, a Canadian author, took to writing late in life. In fact, the first book in this series was published when he was seventy. The list of classic authors who were long dead by that age is far longer than the list of those who wrote any significant work after that age. One of the many benefits of our modern age.

The basic premise of the books is that Flavia de Luce, an eleven year old with a passion for chemistry, and powers of deduction and observation beyond her years, solves murders, which conveniently happen within her village. (I don’t mean to be snarky. This is a necessary convention of the murder mystery genre - particularly the British tradition.)

Flavia is a delightful character for many reasons, particularly her impulsiveness and candor which make her believably young. She also has a sharp tongue the ability to make quick, if not always wise, decisions. Her family and those relationships are also interesting. This book continues the development of those relationships in a more nuanced direction that was started in the last book.

The title of the book, like the others, comes from a literary quotation. (In this case, it comes from The Lady Of Shalott, by Tennyson.)

This particular mystery reminded me a bit of the second in the series in that nearly half of the book goes by before the murder occurs. Thus, there isn’t much time to unravel the mystery. In fact, things happen a bit too fast for my taste at the end. However, as in the other book, this does leave time for more development of the characters before the plot takes over. Also, like the second in the series, the plot revolves around the entertainment industry.

I am not going to give any spoilers, since I feel that is a mean thing to do when discussing a mystery. All of what I say regarding the plot can be found on the back of the book.

The De Luce family  is heavily in debt, partially due to the maintenance of their property, Buckshaw; so in an attempt to stay out of bankruptcy, Flavia’s father rents it to a movie studio for filming. This brings a whole hoard of people together, so there are plenty of suspects when the murder occurs - particularly since a snowstorm strands everyone at the estate. Unlike the other books, where the village itself figures prominently in the story, this one takes place entirely at Buckshaw. I did miss the village a bit, but it was fun to read more about the old house and its history. As I noted before, Flavia’s relationship with her sisters and father was explored more in this book, and the close proximity helped with that development.

As in the other books, chemistry plays a role in the plot. I really appreciate that Bradley took the time to get the facts right. In too many books, science, math, and other verifiable facts are treated carelessly. (Don’t even get me started on music. Particularly music in movies.) It is nice to know that the author cares enough about the details to look things up.

As with each of these books, there are a number of delightful lines. Bradley is obviously well read - my favorite Victorian, Anthony Trollope gets a mention in one of the others - and both literary and musical references abound. (He gets the music right too.)

I like the one delivered by the vicar, who, to his wife’s neverending annoyance, has an irreverent streak. He enters from the increasing snow.

“It’s coming down as if all the angels and archangels are plucking chickens.”

That one made me smile. And also this one, by Flavia, who is not exactly sure how babies are born.

The fetching of water at a birth was, I had learned from the cinema and countless plays on the wireless, a ritual that might as well have been the Eleventh Commandment, though why boiling water was invariably specified was beyond me. It seemed hardly likely to be used to baste the mother without risk of serious burns, and it was simply beyond belief that a newborn would be immersed in a liquid having a temperature of 212 degrees on the Fahrenheit scale - unless, of course, that was the reason for newly delivered babies having that lobsterish color I’d seen in the cinema.

I also learned a fun British word from this book: pantechnicon. Apparently, this is what we Americans would call a “moving van,” or something similar. The original ones were horse-drawn, and were tall and narrow so as to fit in the small streets of the older sections of town.

As with all of the Flavia books, this one is a nice light read, perfect for a summer vacation book. (I read it while camping with the kids.)

Posted by Diary of an Autodidact at 1:30 PM