Thoughts on the retirement of Rebecca Brooks

It is nearly time for the concert to begin. However, there is still one vacant seat in the orchestra, in front, to stage right of the podium. Then as the lights begin to dim, the concertmaster makes her way to the front, violin in hand, takes a bow, and signals to the oboe that the orchestra is ready to tune.

In addition to this ceremony, the concertmaster is responsible for leading the string section, coordinating the bowings, and for leading by example as to proper technique and phrasing. She also plays the short solos within many of the great works, and is expected to play things right, the first time, and every time. It is a great responsibility, to be sure, but a concertmaster also sets the tone for an entire orchestra. A skilled player who is also a demonstrative leader is easy to follow. A leader who adds to those qualities a kindness and helpfulness becomes an inspiration.

This Saturday, May 11, Rebecca Brooks will take that walk to the front of the stage for the last time, retiring after serving as concertmaster of the Bakersfield Symphony Orchestra for the last 48 years. In her case, “bounce to the front of the stage” will be a more accurate way to put it. She has always had that lightness of spirit and enthusiasm which is unmistakable in the way she walks. 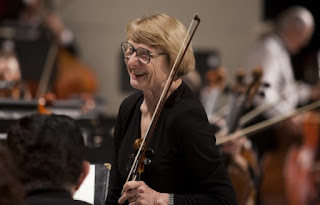 Mrs. Brooks came to us from the Seattle area long before I was born. I remember that she showed me one day a newspaper clipping from her high school days, and I was surprised that she still looked pretty much the same. Shortish blond hair, the same smile. I remember too, that she and her prank-playing brother were both adopted, and that her mother took great pains to ensure that they were musically trained. (I also remember the story about her brother playing a piece exactly one note behind another player who was practicing in the next cubicle. That’s just mean!)

I first met Mrs. Brooks over 20 years ago, when I became her violin student as a teenager. I admit I was a little skeptical before I met her. We had recently moved, and my brother had started with her first, and I was even less fond of change then than now. However, by the end of the first lesson, I was sold.

I think from the very beginning, we were more than just teacher and student. We were friends, and have continued to be friends ever since. It wasn’t just the music - although it was about music. We talked about literature and hiking and traveling and really all kinds of stuff. (Her husband Dale also introduced me to P. G. Wodehouse and Anthony Trollope, and contributed to my own library a number of books he replaced with better editions.) Without a doubt, she has had a significant influence on my life.

A few memories are particularly dear to me. I remember that she called me personally when I won the audition for Youth Symphony concertmaster - she prepared me very well, but it was a bit of an upset due to the stiff competition. I remember the many hours of work we put in together on the Saint Saens violin concerto, which enabled me to play it with the Bakersfield College orchestra. And she was there cheering me on.

She has demonstrated the sound of the violin for the children at our Young People’s Concerts. While she has a nice array of short clips, her most-used one is the voice of Scheherazade - one of the solos that we worked on together when I played it with BC.

When I started studying with her, I had primarily played works from the Baroque and Neo-Classical eras, and it was left to her to introduce me to the great Romantic Era works, starting with the Mendelssohn concerto. I remember that she kept encouraging me to stop making my shifts so precise. I think “mechanical” was the word she used. Ouch. She urged me to make “sexy” slides. This was not easy for me: sexy is not exactly my natural talent. But she did get me to loosen up a bit and be expressive. I still smile though, every time I think of “sexy slides.”

I love her stock answer to the question, “Which Brahms symphony is your favorite?” “The one we are playing next.” It is fitting, then, that we are playing the incomparable Second Piano Concerto for this final concert.

For the last 17 years, she has been the one who (unless my wife is able to attend) has attached the flower to my right lapel before each concert. I am not the only one. I think this is part of her unofficial “orchestra mother” job. (Arcane orchestra fact: string players place their instruments on or against their left shoulders. Except in the case of the string bass, the flower would be squashed on that shoulder. So, even the men wear the flower on the right side.) I will miss that, and the little conversations that we always have backstage.

One measure of the impact of any teacher is in the accomplishments of her students. There are several generations of Mrs. Brooks’ students in the Symphony. I find that to be an inspiring legacy. We all know how much she contributed to us as musicians and as human beings.

The last several years have been a season of change. In my legal practice, we have seen more than half of the judges in our county retire and be replaced by new men and women. Many of the old guard in the musical community have also retired, and new faces are everywhere. I am naturally a conservative - perhaps even a bit of a stick-in-the-mud. I do not particularly welcome change, I will admit.

Our new concertmaster, Julia Haney, will be a fine replacement. She too is a brilliant musician and also a delightful person. I have no doubt she is an excellent choice. But I will deeply miss Mrs. Brooks. While she will continue teach, the orchestra will not be the same without her.

So here’s to you, Mrs. Brooks: teacher, leader, mentor, and above all, a good friend.

For a fine article and interview, see this link on the BSO page.

For the first one, I will note that Prokofiev is probably Mrs. Brooks’ favorite composer. I wish I had been alive when she and Mr. Brooks worked their way through the violin and piano sonatas together. Here is a clip from #2, which is quite delightful.

For the second one, I refer to the story of her returning home to find Mr. Brooks rocking one of their infants to the strains of Prokofiev’s The Avenging Angel. I would say something about how odd of a choice this is, except that my second daughter (the aspiring violinist) used to beg for Stravinsky as her bedtime music.

Finally, I have to include some of the Brahms. We played this piece my first season with the Symphony along with Anton Nel, and it immediately became my very favorite piano concerto. The third movement even makes me wish for a moment that I had chosen cello over violin. For a moment. I will probably choke up when we play this Saturday. Even listening to it as I type, I think my eyes shine a bit. I think Brahms made bittersweet come to life in this work.

Posted by Diary of an Autodidact at 10:24 PM