Alarms and Diversions by James Thurber

Although I probably would have developed a love for snark one way or another, I blame the fact that I read a good bit of Mark Twain and James Thurber during my high school years. (Twain’s The Innocents Abroad did much to make me cynical of guided tours and saintly relics. And the line, “Is...is he dead?” still makes me laugh.) Thurber’s style still fascinates me as well. His wordplay and puns, the fraught male-female relations, his intolerance for annoying dinner guests, and his delightfully primitive drawings - all these characteristics make for delightful reading, particularly when combined with his dry, understated wit.

Those who have not read any Thurber might start with his best known work, “The Secret Life of Walter Mitty,” or perhaps Fables for Our Times. (Moral: Don’t count your boobies before they are hatched.)

Thurber was born in Ohio in 1894. His father was probably his model for the timid protagonist with the far stronger wife. His mother was quite the live wire. Thurber called her a natural comedian, and her strongest form of humor was the practical joke. (More about her later.) As a child, he lost an eye after his brother accidentally shot him with an arrow. His eyesight in the remaining eye was injured as well, and he eventually became practically blind.

I noted in one of my posts on P. G. Wodehouse that it was interesting that it was Wodehouse and Thurber who wrote the character of the hen-pecked man more convincingly than any other authors - despite the fact that they were both happily married. Thurber did experience an unhappy first marriage, but he hardly seemed to have been a pushover. His second wife Helen was much better suited to life with an author, and indeed she helped him greatly as his sight failed. Friends described them as a devoted couple.

Thurber wrote primarily for The New Yorker, during its heyday under founder Harold Ross. (Thurber would write about his relationship with Ross, who was quite a character, in The Years with Ross.) His various fiction and non-fiction works were then collected and published as books. He also wrote a few stand-alone works, such as his surreal fairy tale, The Thirteen Clocks.

Of the Thurber collections I had previously read, I would have voted for Lanterns and Lances as my favorite, based on the pleasing variety of topics, the nightmarish tales of his insomnia, when words would haunt his thoughts, and on the delightful tales of how annoying other people’s children - and their doting parents - are, “The Darlings at the Top of the Stairs” and “Moments with Mandy.” Oh, and also essays on ill-used language, such as the prescient “The Spreading ‘You Know’” and “Friends, Romans, Countrymen, Lend me Your Earmuffs.” However, I think that Alarms and Diversions might now be my favorite. By a little. At least because it has more drawings.

While language does not take up as much space in this particular collection, Thurber’s wit still shines in essays such as “The Psychosemanticist Will See You Now, Mr. Thurber,” which includes delightfully descriptive terms such as “carcinomenclature” (meaninglessly obtuse descriptions), and memorable phrases like, “the psychic trauma caused by linguistic meaninglessness.” In our increasingly jargonistic times, Thurber’s perspective could have been written in our own time, rather than the 1940s and 50s.

Also surprising is how well Thurber understood trends that we think of as modern. For example, he wrote wonderful sendups of parenting trends (“...the tendency of our time to oversimplify problems, especially where little girls are concerned...” is a great line in an essay on poor parenting techniques), belief in mythical creatures (an essay on the Loch Ness Monster compares it memorably to the Beast of Revelation), the Christmas card culture, and panic about the supposed “feminization” of everything - particularly literature.

Another incident in Thurber’s life gave rise to another modern conundrum. Thurber spent several months during World War One as a code clerk for the State Department. For whatever reason, he was never given much of a screening, being asked only if his grandparents were born in the United States.

Waking up at night now and looking back on it, I sometimes wonder how I would have come out of one of those three-men inquisitions the State Department was once caught conducting. Having as great a guilt sense as any congressman, and a greater tendency to confession, it might have taken me hours to dredge up out of my mind and memory all the self-indictments that must have been there. I believed then, and still do, that generals of the Southern Confederacy were, in the main, superior to generals of the Northern armies; I suspected there were flaws in the American political system; I doubted the virgin birth of United States senators; I thought that German cameras and English bicycles were better than ours; and I denied the existence of actual proof that God was exclusively a citizen of the United States.

It wouldn’t be a Thurber book without some funny stuff about the “battle of the sexes,” of course. I liked the banter between Thurber and his wife after he made a questionable impulse purchase.

His self-deprecating humor at the expense of males is balanced by his hilarious portrait of his aunt Wilma, who couldn’t do math to save her life, yet insisted on arguing with the local merchant about the amount of change.

One of the best essays in the collection is entitled “My Own Ten Rules for a Happy Marriage.” Inspired (he says) by the couple in a nearby apartment who destroyed the tasteful arrangement of their home by appropriating the knick-knacks as projectiles, he decided to make his own list.

I have avoided the timeworn admonitions, such as “Praise her new hat,” “Share his hobbies,” “Be as sweetheart as well as a wife,” and “Don’t keep a blond in the guest room,” not only because they are threadbare from repetition, but also because they don’t seem to have accomplished their purpose.

Thurbers rules are at turns silly, satiric, and pointed. Examples, in that order:

Rule Two: A man should make an honest effort to get the names of his wife’s friends right. This is not easy. The average wife who was graduated from college during the past thirty years keeps in close touch with at least seven old classmates. These ladies, know as “the girls,” are named, respectively: Mary, Marian, Melissa, Majorie, Maribel, Madeleine, and Miriam; and all of they are called Myrtle by the careless husband we are talking about. Furthermore, he gets their nicknames wrong. This, to be sure, is understandable, since their nicknames are, respectively: Molly, Muffy, Missy, Midge, Mabby, Maddy, and Mims...”

Rule Three: A husband should not insult his wife publicly, at parties. He should insult her in the privacy of the home...

Rule Four: The wife who keeps saying, “Isn’t that just like a man?” and the husband who keeps saying, “Oh well, you know how women are,” are likely to grow farther and farther apart through the years. These famous generalizations have the effect of reducing an individual to the anonymous status of a mere unit in a mass...

This last one, in particular, is one that I have observed to cause immense damage in relationships - and kudos to Thurber for finding a way to make it amusing by the end.

Another fun one was his idea that a wife might need to draw a detailed map of the house, showing the location of all objects the husband might need. (My wife probably has thought this at some point.) Of course, the problem is that he would lose the map.

And, in the way that only Thurber can find a way to mix relationships with grammar, there is this great paragraph near the end of the “rules.”

Two persons living in holy matrimony, I should have said long before this, must avoid slipping into blasphemy, despond, apathy, and the subjunctive mood. A husband is always set on edge by his mate’s “Far be it from me” or “Be that as it may.” This can lead to other ominous openings: “Would God that” and “Had I only the good sense to,” and the couple is then in the gloomy sub-cellar of the pluperfect subjunctive, a place where no marriage can thrive. The safest place for a happily wedded pair is the indicative mood, and of its tenses the present is the most secure. The future is a domain of threats and worries, and the past is a wasteland of sorrows and regrets.

I want to mention two more essays that I loved. Both are biographies. The first is a portrait of a woman known to everyone as “Aunt Margery,” from “Daguerreotype of a Lady.” Aunt Margery is a midwife and herbalist, with a delightfully quirky personality. She was obviously a big influence on the very young Thurber.

The second is entitled “Lavender with a Difference,” and is Thurber’s touching (and hilarious) obituary for his mother. As I noted above, she was quite a practical joker. In fact, by the end of the first couple of pages, I realized that I had found a female version of my father-in-law, who pulled some pretty outrageous and delightful pranks in his younger years. (He drywalled over the door to a dorm-mate’s room while he was home for the holidays, for example.)

Mrs. Thurber borrowed all the dogs in the neighborhood to pull a prank on her uptight aunt, pretended (in a brilliant disguise - including young James as a prop) to attempt to purchase the house next door, harassed the local merchants with requests for a single shoe or glove, and so on. The best, however, was when she snuck into a meeting hosted by a “faith healer,” borrowed a wheelchair sitting outside, and pretended to regain her ability to walk. Unfortunately, the owner of the chair was not amused...

Finally, I do want to share some of the illustrations. Thurber’s art was, shall we say, a bit simplistic. Like Mo Willems of the “Pigeon” series of children’s books (I love his stuff!), his art has an unexpected impact. He is able to convey mood and emotion in a minimum of detail.

Here are a few of my favorites from Alarms and Diversions. I apologize for the poor quality. I had to take pictures from a book that didn't want to stay open. These are really hard to find online - particularly the ones that fit my quirky sense of humor. 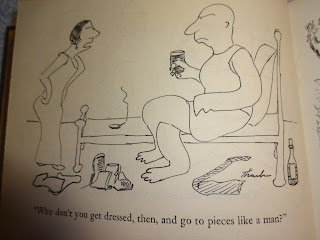 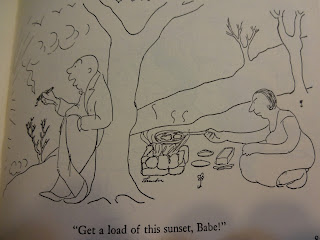 I suspect that this is the fear that keeps my wife from being a camper. And she has a point... 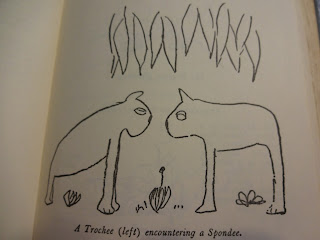 Poetry geeks will appreciate this one. 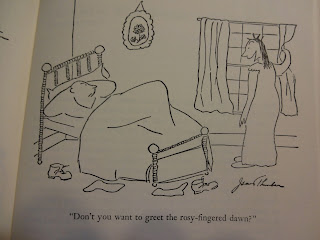 Clearly Mr. Thurber shared with me a knowledge of Homer and an annoyance at "morning people."