The Letter of Marque by Patrick O’Brian

Source of Book: I own this.
The Letter of Marque is number twelve of the twenty and one-half books in the Aubrey-Maturin series that O’Brian wrote between 1970 and his death in 2000. The series follows the lives of the two main characters throughout their careers, and thus may be considered to be one exceedingly long novel.

Originally born in England as Richard Patrick Russ, he changed his name in 1945 after marrying the ex-wife of Russian nobleman Dimitri Tolstoy (a distant cousin of the famous author). O’Brian was quite secretive about the early part of his life, and there is some evidence that he was involved in the secret services during World War II, which might explain his wish to leave his past and past name behind.

The Aubrey-Maturin series is the story of Jack Aubrey, naval captain; and Stephen Maturin, a physician and secret agent. The two meet for the first time in Master and Commander, and afterward are inseparable both personally and professionally. The series is often compared to C. S. Forester’s Horatio Hornblower series, as both used the real life adventures of the British Navy during the Napoleonic Wars as the basis for their plots – particularly the exploits of Captain Thomas Cochrane, the inspiration for Jack Aubrey. However, O’Brian’s novels have appeal beyond the exciting episodes. The character and personalities of the two men are central to the narrative, and keep the series from becoming a mere naval thriller in long form. In fact, O’Brian is most often compared to Jane Austen for his characterization and sparkling dialogue.

The novels themselves are notable for a wealth of careful detail. O’Brian made a study of the geographical details of the places around the world in which the events occur, and is able to use these details in his descriptions of the battles in a vivid manner. I found it easy to picture the position of the characters in each assault on land, the lay of the obstacles around a difficult harbor entry, and the lines taken by the ships in battle as each tries to gain the best position regarding the wind and the orientation of the guns. O’Brian uses plenty of nautical terms, and doesn’t explain them all at first, so the reader must keep up as best he can until things start to make sense. This parallels the disorientation that Maturin feels at sea the first time. (He never quite gets over his lubberly tendencies.) Maturin is also a naturalist, so his adventures bring an abundance of plants and animals to the story, in their natural habitats, and occasionally aboard the ship. The cloak and dagger episodes involving Stephen’s work in intelligence are also full of authentic atmosphere and incident – perhaps lending some credence to the idea that he had lived this life.

O’Brian has an interesting writing style that almost defies a short explanation. On the one hand, his dialogue is similar to Austen and other contemporaries – it certainly isn’t modern speech. On the other, the writing itself feels modern in texture. The words flow naturally, without the stilted feeling typical for 19th Century writing. Also unique is O’Brian’s choice of pacing. He will dwell in loving detail on a seemingly insignificant scene: insignificant to the plot at least. These scenes are often important for character development. O’Brian uses his pacing in other scenes to suggest the perception of time. The preparation for a battle will seem long and tense, building gradually to the big climax, which will then fly by breathlessly, with little chance to notice even the details of the fight. Then, O’Brian will skip over certain events altogether. Some of these, I wished he had fleshed out, but he chose which portions of the story he felt were most important. This is not to say that important plot points are left out, because they are not. I never felt lost, just a bit concussed. I suspect this is intentional. The experience of war isn’t like the movies, or even most books, but the author makes an attempt to recreate the feelings through pacing.

Another more modern facet of the writing is the realism as to the less savory elements of society. Disease and prostitution are ever present in the 19th century world. The fact of adultery is not denied, nor is it glorified. Sex is treated frankly, but not graphically. (There is a scene of rather graphic insect sex, though.) The typical novel of the period either ignores these issues, or treats them in a lurid and unrealistic manner. I found O’Brian’s approach to be a more honest one. There is no bodice ripping here. Venereal disease is common, as are illegitimate children. (Maturin himself is one.) Adultery isn’t the grand romance of certain modern literature, but has real life consequences. Nothing is there for the titillation factor. Everything serves the plot and the characterization.

As to this particular volume of the story, it is set much more at sea than the previous one, The Reverse of the Medal, which takes place primarily on land. It is also less dark in its events than its predecessor, and has plenty of exciting naval action. It also explores Maturin’s opium addiction and Aubrey’s inner torment in more detail than previous books, giving a contrast to the rather sunny events of the book. (Assuming you consider kicking French posterior to be a happy affair, of course.) The book also brings the character of Diana Villiers (now Stephen’s wife), the most interesting female character in the series, back into the story.

It would be pointless to spoil the plot of this or any other book in the series. Suffice it to say that O’Brian can be counted on to tell a good tale. The story is hardly the main point, however, or there would be no reason to re-read these after the plot is known. The excellent writing and characterization are what raise these books above the average adventure tale.

Some notes on stuff beyond the books:


I have not seen the movie version of Master and Commander. In general, I have a hard time with movies that are based on good books, because a disappointment is likely. There are a few great adaptations of good books: Peter Jackson’s Lord of the Rings trilogy comes to mind, as well as the BBC’s Pride and Prejudice and the first two Anne of Green Gables movies.


I will admit I am prejudiced against this one from the start because of one detail. The plot of the movie is taken from The Far Side of the World, rather than Master and Commander. This is not the problem. The problem is that the enemy in The Far Side of the World is not France, but the United States. Perhaps Hollywood thinks American audiences can’t handle being the villain. Perhaps Hollywood reads American taste well, seeing as Adam Sandler has a career. It still hacks me off. Let Aubrey shoot at Americans!


I have, however, enjoyed one item connected with the movie. Aubrey’s favorite ship, the Surprise was lovingly recreated for the movie. It is now preserved as a functioning ship at the San Diego Maritime Museum. While a purist would quibble that the “actual” Surprise was a bit bigger than the movie one, this is still a truly amazing reproduction. For those of ample means, it is possible to train as a deck hand, and sail this thing on a cruise. If that is beyond your budget and time allotment, the museum itself is well worth the price. In addition to the Surprise, you can tour the Star of India, an actual ship from the end of the age of sail. My kids loved this. One of the original bay ferries has been turned into the main museum, with plenty of displays regarding steam power and other stuff irresistible to young boys. 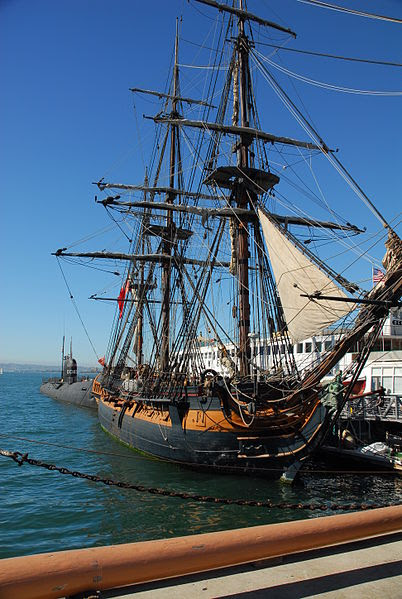 Finally, we classical musicians can enjoy the books for the fact that Aubrey and Maturin play violin and cello, respectively. Numerous chamber works from the era find their way into the books. One wonders whether O’Brian played, or if he was a just a fan.
Posted by Diary of an Autodidact at 11:20 PM