The Hunt for Vulcan by Thomas Levenson

Source of book: Borrowed from the Library

This book was recommended by my friend “Hester,” who wrote about it here. The book is the story about how math found the planet Neptune, and predicted a planet between Mercury and the sun, which turned out not to exist. Instead, the difficulties presented by Mercury’s orbit eventually led to the development of Einstein’s theories of special and general relativity, and a revolution in how we think of space and time. 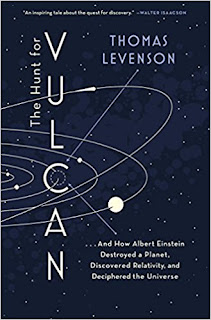 The marriage of math and astronomy dates back millennia, with the ancient Egyptians, Greeks, and Chinese of particular note. As long as we have gazed at the heavens, it appears, we have attempted to make sense of what we can see. The Ancients are sometimes unfairly maligned by people who do not know their history. A great example of this is the claim that it was Columbus who proved the earth was round. Actually, the ancient Greeks not only knew the earth was round, but calculated its diameter to an astounding degree of accuracy given their technology of measurement. Likewise, theories of heliocentricity date back pretty far before Copernicus - they just weren’t widely accepted until later.

So, the planets have always been known, and it was clear that they all followed a similar path in the sky (what we call the ecliptic.) Their paths were also regular and predictable. However, given the limits of human eyesight, only five (plus earth) were known.

With the acceptance of heliocentricty, and Newton’s insight into the mathematics of gravity, the eliptical orbits of the planets were eventually calcuated.

Credit for the discovery of Uranus goes to the Herschels, a brother-sister team who spent years mapping the sky while looking through a home-built telescope. Eventually, they found an object that moved, and didn’t resolve to a point under magnification like a star. It was either a planet or a comet. Further observation and calculation established the orbit of Uranus.

Except there was a problem.

The orbit didn’t fit the math. Something was wrong. Was it Newton? Or was there something affecting Uranus’ orbit.

In one of the most famous scientific triumphs of all time, Urbain-Jean-Joseph Le Verrier calculated the orbit and mass of Neptune based purely on the anomalies of Uranus’ orbit. When he finally convinced an astronomer with a powerful enough telescope to look in the correct place, boom! There it was.

Le Verrier then turned toward the problem of Mercury, which likewise had difficulties with its orbit. As measurements had grown more accurate, it was obvious that Mercury too was not obeying Newtonian physics properly.

But despite Le Verrier’s calculations and many attempts at spotting something, anything that would affect Mercury’s orbit, nothing could be found. (This book describes at length the process of searching near the sun during eclipses - which sounds really cool.) There should have been something there, but there wasn’t. At least if Newton was correct.

It would be later that Einstein, working on his own theories about the union of space and time (analogous to matter and energy in being dimensions of the same basic substance), realized that relativity would indeed affect the orbit of Mercury. In fact, because Mercury was closest to the sun, a rather large mass, it would be affected more than any other planet. Newton’s laws of planetary motion and gravitation weren’t exactly wrong, but they were incomplete.

(One recommendation I give to anyone wanting to understand the difference between being wrong in an absolute sense and being just relatively more or less wrong is this fantastic article written by Isaac Asimov. Hat tip to my cousin the professional math geek for sending it my way years ago. It is a great rebuttal to those who claim that since science has gotten things wrong in the past, that we should never trust science when it conflicts with, say, religious dogma. Yes, Newton was wrong in a sense. But he was more right than those who came before, and what is certainly NOT going to happen is that science is going to suddenly decide that the universe revolves around the earth.)

I’m a sucker for books like this, which give the fascinating history of science. I have loved science as long as I can remember, and have devoured it since I was a kid. (I still own the Growing Up With Science encyclopedia set that I read cover to cover several times as a kid. I also recommend David Macauley’s The Way Things Work as an excellent resource for kids.) Just in the last few years, I have particularly enjoyed Sam Kean’s books on a variety of scientific subjects, Thomas Suddendorf’s The Gap, David Weintraub’s How Old is the Universe?, and Phil Plait’s Death From The Skies. Actually, my subject index has a whole category for science, if you want some great suggestions. For the history of science - including a lot on the Herschels - I highly recommend The Age of Wonder by Richard Holmes.

There are a few lines in the book I want to mention. The first is from the introduction, which points out that science doesn’t advance in the idealized way that it is often thought to. Old theories are often held onto longer than they should be. The reason for this is that a “powerful, or a beautiful, or perhaps simply a familiar and useful conception of the world” will not be abandoned until two factors are in place: an utter compulsion (the theory fits so badly that it can no longer work), and a real alternative. This second is crucial as well. Newtonian physics weren’t perfect - but they worked for almost everything - certainly anything we needed to engineer here on earth. (At least until we invented GPS, which requires that the software account for both special AND general relativity…) And, until Einstein formulated a theory that worked better, it was no use to just jettison an imperfect theory altogether. This is really the problem that Young Earth Creationists cannot acknowledge. While we have an imperfect and incomplete understanding of geology and astrophysics and evolutionary biology, what we do have fits the observable evidence far better than the theory of a 6000 year old universe. It isn’t enough to just point out gaps and flaws - you have to formulate a viable alternative theory that accounts for the evidence better than what we have. And no, “just so stories” do not count.

Another interesting passage was about Einstein’s difficulties in getting observations to test his theories. Because he lacked the time away from his day job - and the experience and equipment for observations - he sent some professionals to Crimea to observe an eclipse. On the one hand, the weather didn’t cooperate. On the other, this little conflict called World War One started, and made the politics of getting his assistants back to Germany quite difficult. (It ended in a prisoner exchange.) So let’s just say Einstein wasn’t a fan of war.

“That man can take pleasure in marching in fours to the strains of a band is enough to make me despise him. Heroism on command, senseless violence and all the loathsome nonsense that goes by the name of patriotism - how passionately I hate them.”

“Our whole, highly praised technological progress and civilization in general can be likened to an axe in the hand of a pathological criminal.”

It is easy to see how he might say this in the middle of what was by any measurement a senseless and horrific war, and one which would lead to another in a couple of decades.

One final bit which really made an impression on me was this one:

Science is unique among human ways of knowing because it is self-correcting. Every claim is provisional, which is to say each is incomplete in some small, or, occasionally, truly consequential way. But in the midst of the fray, it is impossible to be sure what any gap between knowledge and nature might mean. We know now that Vulcan could never have existed; Einstein has show us so. But no route to certainty existed for Le Verrier, nor any of his successors over the next half century. They lacked not facts, but a framework, some alternative way of seeing through which Vulcan’s absence could be understood.

The author here is mostly right. He is right about how humans are functioning now. But there is some history here which is beyond the scope of the book - and his point here.

Once upon a time, science and religion were more intertwined. At one point, priests were scientists, and the cutting edge of science was furthered by religion. However, as Petr Beckmann points out, there is a tension here, because science takes work, whereas mumbo-jumbo is cheap to produce - and people tend to pay the same for it.

But as a consequence of the intertwining, religion has sometimes been more like science, where all knowledge - including theological knowledge - is provisional, acknowledged to be incomplete (perhaps “through a glass, darkly…”), and subject to revision upon further exploration and investigation. It was a humility about our knowledge which is completely lacking in modern Evangelicalism, which truly believes it knows everything there is to know about everything.

One of the things I did this year during my lunch breaks was listen to Christine Hayes’ excellent lectures on the Old Testament. (The open course is essentially free from Yale.) One of the points she made early on was that in the Ancient Near East, religious texts were considered authoritative, not because they were unchanging - but because they were changeable. It was the very nature of an authoritative religious text that it would be revised and reinterpreted to suit changing information and cultural needs. That is why the stories of Israel’s history in Samuel/Kings differs so widely from that in Chronicles. Different time period, different theological perspectives. It is why there is argument and discussion of different issues from interracial marriage to the meaning of life just within the Old Testament, to say nothing of the conflict between Old and New.

In this sense, religion was at various times - and could be again - a form of human knowledge that resembles science and in a good way. If knowledge is again less ossified and subject to revision and reinterpretation based on new discoveries about the universe, about human nature, about societies and culture, it can too become self correcting, rather than a perpetuation of the injustices and prejudices of the past. A little humility about what we know, don’t know, and especially how we use our (lack of) knowledge to help or harm others.

Anyway, with that digression, I recommend this book for some fascinating history and as a starting point for thinking about what we know and how we know it.
Posted by Diary of an Autodidact at 11:05 AM