This is by no means the first time I have seen this play. I read it during high school, and have seen at least a couple of local productions prior to this one. It has been a few years, and only the older kids were old enough to go see it. All except my youngest came to see this one with me at The Empty Space.


As with all Shakespeare plays, Romeo and Juliet reveals new insights every time you see it. Some of this is the difference in how it is interpreted by the actors and director. But some too is just how the human brain perceives things differently at different times.


I will assume for purposes of this post that everyone is familiar with the plot, the characters, and Shakespeare’s particular take on an ancient story.


I have plugged The Empty Space before. It’s a local theater which is low on budget and stage space, but high on production values and commitment to excellence. The experience is always worth much more than the low ticket prices would suggest.


The casting was interesting in a number of ways. The title characters were - as they should be - rather young. Tessa Ogles as Juliet captured the naivete and purity of love that the character requires. She is deeply in love, but a love without that first taste of disillusionment, and one senses that Romeo is not at all worthy of her. (This was a bit of a new insight for me. Usually, I find Juliet to be as silly as Romeo. Overearnest, yes, but not as pure as in this case.) I saw Ogles last year as the one normal family member in You Can’t Take It With You, where she likewise turned in a memorable and believable performance. 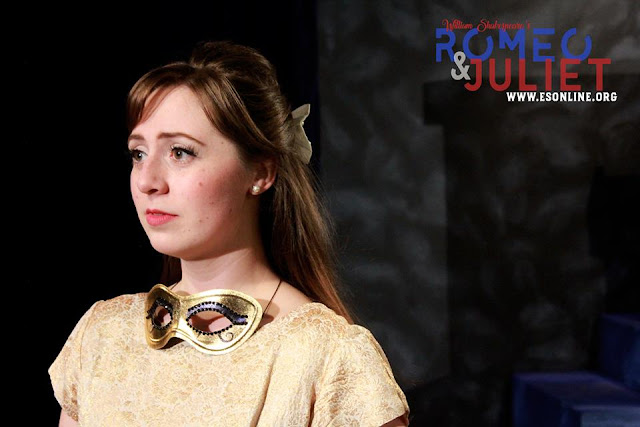 
Romeo, in contrast, is written as flaky more than truly in love. After all, he spends the opening scenes mooning over Rosaline, who maintains her chastity, to Romeo’s frustration. Nick Ono chose to make Romeo hopelessly melodramatic and unable - or unwilling - to come to terms with his own emotional instability. As much as he falls for Juliet, he is more concerned about the way fate has wronged him as he is about her needs. His was not the favorite of the portrayals I have seen, but it is a legitimate take on the character, and he sells it well. When Friar Lawrence has to drag him off the floor, the blubbering, quivering mess that he has become is entirely in line with the way Ono sets the character up. 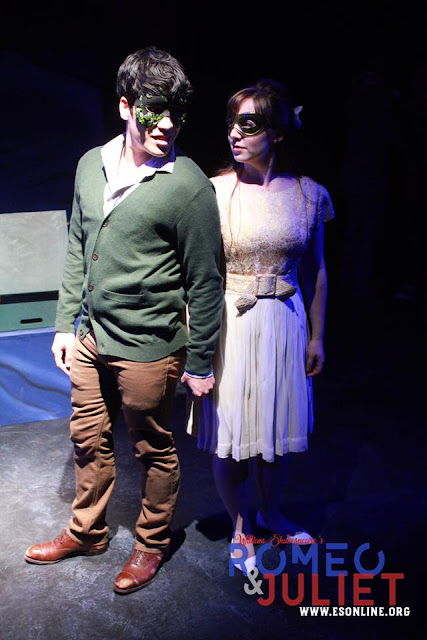 
Another character which stood out to me this time were Lady Capulet (Carolyn Fox), who owned her scenes. Fox is a regular at The Empty Space, and fuses restraint and emotionality in her roles. The interplay of Juliet and her mother is interesting to me. There is a definite emotional distance that neither is able to bridge, which is why when Juliet realizes her nurse isn’t really on her side, she is so devastated. She literally has no one to turn to, with Tybalt dead, her parents distant, and her confidant selling her out. (And Romeo, even if he had anywhere near the strength to provide her some stability, has been banished.)


As for the nurse, I think this is the first time I really felt her to be a malevolent character. Because she is funny and witty and all, it is easy to miss the lines where she makes clear that she resents that Juliet lived, while her own daughter died. Juliet doesn’t realise it herself until it is too late, and she regrets that she has revealed as much as she has. Amy Hall is also a veteran actor, and turned in a strong performance in that role.


One unexpected treat was Nolan Long as Peter, the illiterate servant tasked with delivering invitations. Because of the limited number of lines, the part is often (in amateur productions particularly) given to someone who is still learning the craft. The lines are funny by themselves, but they are so much better when well played. Long nailed it, with perfect timing, physical humor, and truly inhabiting the part. Also, a bonus for dancing like nobody was watching during the ball.


There were plenty of other good performances. Ryan Lee (who was outstanding in Arsenic and Old Lace and The Glass Menagerie) as the uptight Paris. The always-delightful Cory Rickard as Friar Lawrence. Blanka Trujillo as a female Benvolio (which made the frisson between her and Romeo more apparent).


But the two best played parts - and the best parts in the play - go to Mercutio and Tybalt. Had Shakespeare not killed them off in the third act, they would have dominated the play entirely, which is presumably why he had to do it.


Justin Thompson, as a particularly ribald and portly Mercutio was hilarious, scandalous, and entirely unsafe to be around. Thompson would make a fine Falstaff. Not everyone can pull off the naughty jokes in Shakespeare, but Thompson relished in them. He was Mercutio, jokester to the last, even as he curses both houses for making him an inadvertent martyr to their stupid feud. 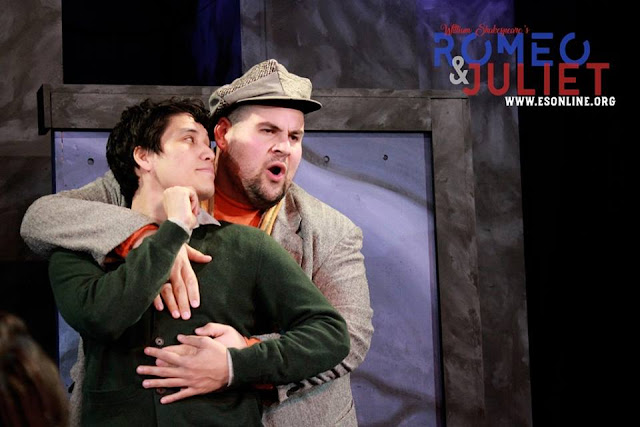 
Tybalt takes his name from the cat character in the Medieval stories of Reynard the Fox, which is why Mercutio taunts him as “The Prince of Cats.” Shakespeare probably also intended to reference the cat character himself, the quarrelsome, sly, and corrupt constable portrayed by Chaucer. This character is able to manipulate others into doing his bidding, bringing trouble on themselves while Tybalt goes free. Thus the reference to “rat catcher.” Mercutio probably also intended to bait Tybalt by questioning his manhood - which is pretty effective.


Isaac Asimov also points out (in his excellent book on Shakespeare) that Tybalt is the only person on either side of the feud who actually takes the feud seriously. Lord Capulet knows Romeo has crashed his party, and complements Romeo, infuriating Tybalt. Juliet herself is heavily influenced by Tybalt, which is probably why she thrills at the idea of a forbidden love.


In this version, Tybalt was played by Claire Rock, in a “trousers” role. With some seriously righteous hair. She showed an edge of menace in the part which was delightful. 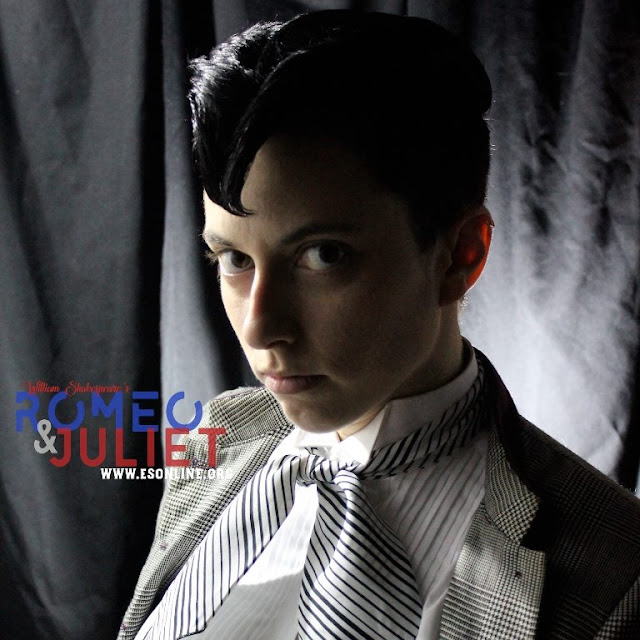 
Romeo and Juliet isn’t really set in any place or time period, so it invites imaginative settings. The Empty Space chose the 1960s, complete with fun costumes and a marvelous soundtrack. (Among others, tunes from The Who’s Tommy.)


I also should not fail to mention the excellent fight choreography in this production. Brass knuckles and knives took the place of swords, and everything was carefully set up to match the music, blow for blow. The time they put in to pull it off must have been incredible. The larger fights were crazy enough, but the best had to have been the fight between Romeo and Paris in the tomb. The only lighting was Romeo’s discarded flashlight (carefully placed, of course) and the fight went from full speed to slow motion until the last, where it felt like a strobe effect, with the knife outlined against the glare of the naked light on the ground. Whoever planned that out deserves serious brownie points.


Romeo and Juliet runs for one more weekend, so if you are a Bakersfield local, go out and see it. The Utah Shakespeare Festival is also doing the play this summer - my wife is planning to make her annual pilgrimage.


This post needs some classical music too. The best known music related to Romeo and Juliet has to be Leonard Bernstein’s West Side Story. Next would probably be Tchaikovsky’s tone poem based on the story.


My favorite, though is Prokofiev’s ballet. I haven’t played the entire thing, but I have played both suites.


I first played two excerpts during my junior high days in the viola section of a youth orchestra in Los Angeles.


The first was “Montagues and Capulets,” which is just fabulous writing. Those clashing chords in the winds at the beginning, with the strings slipping in unnoticed at pianissimo. Then the feuding sections (primarily cellos versus violas) laying down the groove while that unforgettable melody from the violins floats on top. And the middle section, portraying the innocence of Juliet, with the glissandos in the strings under the flute.


The second is the scene with Romeo and Mercutio masked at the ball. Typical Prokofiev melodies.


And, because Tybalt is a key character, the fight scene and death of Tybalt. This is the most wickedly difficult bit I have played, particularly starting at around 1:35. Yikes. (And this is a slower tempo in this recording…) Then those seemingly endless hammer strokes, followed by that grotesque and disjointed funeral march which grows ever more dissonant until the end.


I can’t resist one more, the folk dance. I just love this exuberant and crazy bit of music. But those exposed high notes in the violins…

Posted by Diary of an Autodidact at 9:51 PM