While my kids are not taking a specifically designed ethics course as part of their homeschool curriculum, in some ways, they are getting the same ideas through some of our favorite things. I was thinking about it, and I think that there are three primary sources: 1. Star Trek TNG (the whole Trek franchise is underrated on this count) 2. Alexander McCall Smith 3. Terry Pratchett. If I had to summarize the most important lessons from these three, it would be that the world is more complex and more filled with shades of grey than some people (often with political agendas) would have you believe, that “following the rules” is not sufficient to be a decent person, and compassion and empathy are crucial to ethical thinking. Failure to understand and implement these ideas has led to most of the worst evil done in the world. 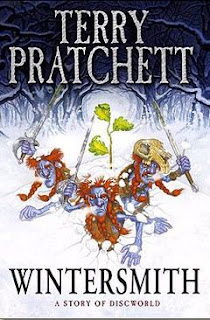 So anyway, another Terry Pratchett book. Wintersmith is the third book in the Tiffany Aching series, following on the heels of The Wee Free Men and A Hat Full of Sky. In the first book, Tiffany, aged 9, discovers her calling as a witch, meets the Nac Mac Feegles, and stops an encroachment by the Queen of Fairyland. In the second book, two years have gone by, and she is beginning her formal training in the art of witchery, which consists primarily in learning how to help difficult people with ordinary but perplexing problems. While she struggles to internalize the lessons, she has to fight off a Hiver, who wishes to occupy her body.

In Wintersmith, Tiffany is now nearly 13, and has gained a greater degree of proficiency in both magic and in practical skills. (For a humorous example of the combination of these skills, her cheesemaking has progress to where one of the cheeses, now named Horace, has become sentient.) Things take a troubling turn, however, when she semi-accidentally joins in the dance of the seasons, cutting the Summer Lady out of her part, and drawing the romantic attentions of the Wintersmith. Elementals are not, shall we say, adept at human courtship rituals, and things go awry all too quickly. An epically cold winter sets in, with hidden signs of the Wintersmith’s attempts to show off for Tiffany. (Snowflakes in her likeness, icebergs in her likeness, ice roses, and above all, everything buried beyond reasonable depths in snow.) 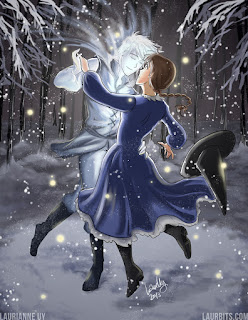 Fan art that popped up when I searched for Wintersmith illustrations.

Meanwhile, Tiffany has a number of more normal challenges to navigate. She is apprenticed to Miss Treason, an elderly witch, but before she can complete her training, Miss Treason realizes she will be dying soon. One of the benefits of being a witch is that you know your time of death in advance. (I can’t quote the exact line, since it was an audiobook, and I was driving, but it was something like, “I’m going to die next Friday, at 6:37 AM to be exact.) This is a real advantage, because you get to attend your own funeral party, and not miss eating the tasty food. The whole scene is both hilarious and so very Pratchett. 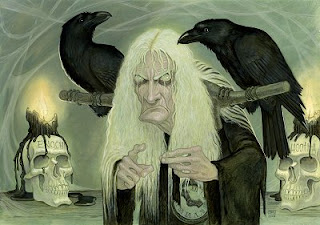 Fan art of Miss Treason and her props from the Boffo catalogue.

When Death (who is very much a person in Discworld) comes for Miss Treason, the drama doesn’t end. In order to be a real witch, you need a cottage, and one has just become available. Which of the young witches in training will get it? Granny Weatherwax (who nobody admits is the head witch), suggests Tiffany, knowing full well that she isn’t really old enough, and doesn’t want the job just yet. This leaves the field open for Annagramma, the protege of Miss Earwig, who is grossly unprepared due to her inferior training.

Tiffany is not exactly fond of Annagramma, but she feels this is a totally unfair setup. She organizes the other apprentice witches to help Annagramma out and teach her what she needs to know.

And then, in her spare time, she has to figure out how to save the world from the Wintersmith, and restore summer to the world. The problem is, she is now involved in a myth - a story with real power.

Fortunately, she has the help of the Wee Free Men, who are deputized to reenact a different myth, that of Persephone and her rescue from the underworld. Well, Pratchett borrows from both the Persephone myth and the related one of Orpheus in the Underworld. The Wee Free Men, like Orpheus, are forbidden to look back as they exit.

As usual, Pratchett combines a compelling and exciting story with truly thoughtful ethical dilemmas. Tiffany is generally a good, decent person, who tries to do the right thing. But she is also human, and frustrated by the feeling that she is being used as a pawn in the schemes of the older witches. Her response shows just how much she has grown since the last book.

Even though Discworld is fictional, and intended to be, there are plenty of parallels with our own universe. One of the more interesting one is the history of witches and witch hunting. As in our own world, being a bit different was often enough to get one burned as a witch. Such things as not marrying. Or, as Pratchett puts it, “A witch was just someone who knew a bit more than you did.”

To avoid a bad experience, then, Miss Tick, who often worked among the superstitious, wrote a book entitled Magavenation Obitsis (Witch Hunting for Dumb People) which advised drowning rather than burning, and also giving the witch some hot tea first, and things like that.

Likewise, Miss Treason makes up scary stories about herself, to gain respect and impress the people she serves. Plus, she orders stuff from a joke and prop catalogue to decorate her cottage in proper witch fashion. As usual, Pratchett handles this with a good-natured humor.

For the kids, though, the funniest parts involve the Feegles, who resemble nothing more than certain (often male) children who are always causing trouble. “Ach, people’re always telling us no’ tae do things,” said Rob Anybody.  “That’s how we ken what’s the most interestin’ things tae do!”

Wintersmith is every bit as good as the previous two books. As with the others, Stephen Briggs is the narrator, and does an outstanding job.

Posted by Diary of an Autodidact at 4:38 PM