The Wide Net by Eudora Welty

A few years back, I read another short story collection by Eudora Welty, A Curtain of Green. I decided to revisit her again this summer.

The Wide Net is a themed collection, in an interesting way. In all except for one of the eight stories, the Natchez Trace is mentioned. (While the other story doesn’t mention it, the setting evokes the area.)

I’m not a Southerner, so the Trace isn’t part of my world, exactly, in the same way that, say, the Emigrant Trail, Nobles Trail, Southern Emigrant Trail, or the Santa Fe Trail are. Actually, the ones that I know the best would be western portion of Route 66 or even more, the El Camino Real, which ran through the area I grew up in. While I don’t know the Natchez Trace, I understand the allure.

The Natchez Trace probably started as a wildlife migration route in prehistoric times. Later, the Native Americans would set up settlements along the route, and extend it. (Evidence of these dates back 2000 or more years.) After the founding of the United States, the trail would serve as the primary connection of the Northeast to Mississippi and Louisiana.

As Welty’s tales tell, the Trace gained a lurid reputation as the haunt of highwaymen and bandits, as well as circuit riding preachers, adventurers, and speculators.

In addition to reading up on the Natchez Trace while reading this book, I also found I needed to research a peculiar event in American history which is alluded to in the first story, “First Love.” Several of the stories involve real historical characters in addition to the fictional ones.

“First Love” is a tale of a deaf boy who is witness to a series of meetings between Aaron Burr and some co-conspirators. I filed the tale away for further research, when I ran across an interesting article which also referenced the events.

That article asked and answered the question of whether The Toupee Who Shall Not Be Named committed treason when he (jokingly or not, take your pick) invited Russia to hack US e-mails. As a lawyer, of course, this was a highly interesting question. Treason isn’t something I run across much in my practice, so I was curious.

It turns out that the most important case on Treason was the trial of Aaron Burr. Short answer, no, Le Toupee probably did not commit treason. And the acquittal of Burr is a good reason why.

It appears that Burr, after he killed Alexander Hamilton in a duel, cooked up a scheme whereby he would purchase or lease a significant portion of what would eventually become the Louisiana Purchase from France, contract with Spain (who ruled Mexico at the time) for military aid, and set up his own country.

Yeah, the very early 1800s were a weird time; this actually wasn’t all that far out of an idea. The only thing that got him in hot water was the idea to enlist a foreign power against the US. Fortunately for Burr, things never really got out of the planning stage, other than the lease with France, which wasn’t sinister by itself - and also perfectly legal.

Other notable things about the event was that the trial was heard by the US Supreme Court. (It’s fun to think of the current bunch actually presiding over testimony.) Thus, John Marshall himself delivered the verdict, which also served as precedent for future cases. In essence, talking a good game won’t constitute treason. You have to actually give aid to the enemy. (On a related note, the Communist spies of the 1950s weren’t convicted of treason, but of espionage and other crimes.)

Burr and his associates aren’t the only historical figures to make it into the book. In “A Still Moment,” Lorenzo Dow,  the itinerant preacher; John Murrell, the legendary bandit; and John James Audubon, the bird collector meet by chance at night on the Trace. Dow left behind a number of books, Murrell became a character in books by Twain and Borges among others, and had his bones stolen as souvenirs, while Audubon needs no introduction.  “A Still Moment” is an outstanding story, with evocative writing that makes the scene unforgettable.

Welty does write exceedingly well, handling the sights, smells, and sounds of nature and habitation equally well. The characters too, are drawn with a minimum of description: Welty exemplifies the adage to show and not tell.

I’ll quote just one line that I can’t get out of my head, from “At The Landing,” a tale of a girl held prisoner by her grandfather but runs off after his death with a questionable man who impregnates her. In an early scene, in a graveyard set on a bluff out of reach of the flooding river:

Everywhere there, the hanging moss and the upthrust stones were in that strange graveyard shade where, by the light they give, the moss seems made of stone, and the stone of moss.

The other stories cover a variety of topics and moods. “The Wide Net” is a very darkly humorous about marital dynamics (among other things.) “Asphodel” tells of a proud girl married to an unfaithful man, and their ugly breakup and its aftermath. “Livvie” is a story of an African American young woman who marries an old man who is paranoidly jealous. “The Purple Hat” may or may not be a ghost story. And, another of my favorites, “The Winds,” tells of a September midnight storm from the perspective of a young girl, who drifts in and out of sleep and reverie, remembering Cornella, formerly their neighbor, whose life - probably tragic - is imperfectly understood by the young girl. I am leaning toward this story as containing the most beautiful writing in the collection. I couldn’t take my eyes off the page, while the world seemed to disappear around me, as I was caught up in the ecstasy and electric frisson of the storm. I love to stand and watch the lightning myself, I must say.

I am a fan of short stories, as regular readers of my blog know. I am thinking that Welty might deserve to be on my shortlist of ones to recommend to others, as I very much enjoyed this collection.

The Natchez Trace is now a driveable parkway, and also some walkable trails, all administered by the National Park Service. It might be interesting to visit some time. I find particularly fascinating the “sunken” portions, carved away by millennia of footsteps by men and animals. The Wide Net refers to this in numerous places. 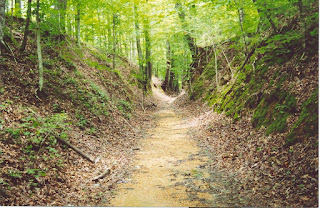 Posted by Diary of an Autodidact at 9:29 PM