Of Mice and Men by John Steinbeck


But Mousie, thou art no thy-lane,
In proving foresight may be vain:
The best laid schemes o’ Mice an’ Men
Gang aft agley,
An’ lea’e us nought but grief an’ pain,
For promis’d joy!


Steinbeck, more than any other well known writer of serious literature, belongs to my home state of California. As far as the “Most Famous Author from the State” goes, Steinbeck ranks pretty high. I mean, some of the others range from the unknown (Montana: Maile Meloy) to the schlocky (Nebraska: Nicholas Sparks.) But California gets John Steinbeck, both well known and well respected.


A bonus thrill to his writing, therefore, for a native Californian like myself, is that his locations are familiar and all around. Not just that, but his ability to observe and put his observations in evocative writing makes those places come alive such that one can not just see, but smell, hear, and feel the reality of each destination.


This particular book is set in the Salinas Valley, near the real-life town of Soledad. For those who do not know California, our mountains and valleys in the central part of the state run north and south. At the very edge of the Pacific Ocean, you can find State Highway 1, instantly recognizable in photographs, songs, and books such as Big Sur by Jack Kerouac. In the dead center of the state, you find Interstate 5, my hometown of Bakersfield, and probably the most fertile agricultural area in the world. But in between is sandwiched the Salinas Valley and US Highway 101. The valley itself runs from just north of San Luis Obispo up to its outlet near Monterey. The 101 forms a significant portion of the El Camino Real, the “Royal Road” connecting the California missions. The town of Soledad contains one of these missions, and the others are located either on the Salinas River or on tributaries. 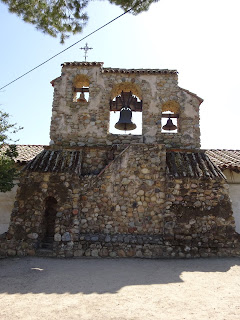 
I have driven this route many times, and it is beautiful in its way. The valley is itself a fertile place. Most of the fresh lettuce consumed in the United States is grown here. (Seriously, check your bagged salad. Chances are it came from California, and if it is summer, it was grown in the Salinas Valley somewhere.)


The valley - and Soledad - also lies directly west of Pinnacles National Park, one of my favorite places. (You can read about some of our adventures there, with pictures of the endangered California Condor, on my National Parks page.)


Anyway, that is the setting, and it is as memorable and familiar as the other California settings in the Steinbeck novels I have read. (The Grapes of Wrath was set in part in Kern County, near where I live. Some of the places were very real, and still exist. Cannery Row has become a bit touristy since Cannery Row was written, but Doc’s lab is still there, and the ruins of the canneries. It’s worth a visit.)


Of Mice and Men is a short novel, only six chapters long. It almost feels like a play, with the classical unities largely observed. While it takes place over a couple of days (thus bending one rule), it is set in one place, and follows one action only. Steinbeck actually wrote it as a “novel-play” in three acts, and it certainly reads that way. Rich and illuminating dialogue is present throughout, and what the characters say is equally important to what they do.


George and Lennie have recently arrived near Soledad to look for work at a ranch. Lennie is a giant of a man, but developmentally disabled. He has the mentality of a small child, which, when combined with his size and strength, makes for disaster. George is a friend who promised Lennie’s aunt that he would look after Lennie. The two travel together, which puzzles those they meet, but, as George notes, it is better than being alone.


Loneliness is the central theme of the book. Even the setting, “Soledad,” bears this out. With the exception of George and Lennie, every other character is somehow alone. Candy has a maimed hand which he knows will eventually prevent him from being able to work, and his old dog has had to be put down. Crooks, the African American character, must sleep by himself in the stable because of his race. Slim is smarter than the other ranch hands, so he is respected, but cannot be treated as a companion. Curley, the boss’s son, is an abusive jerk with a Napoleon complex, and his constant jealousy and rage alienates everyone else. Curley’s wife (who never gets a name) is miserable in her marriage, and cannot even talk to anyone else without him blowing up at her.


And even George and Lennie suffer from this. George feels Lennie is a burden - and he most certainly is. Lennie cannot truly communicate with anyone else because of his mental challenges.


From the very beginning, it is obvious that this story will not end pleasantly. George and Lennie are on the run because Lennie grabbed a woman’s dress to pet the pretty and soft fabric, and when she protested, he panicked and wouldn’t let go. He was accused of attempted rape (naturally considering his actions if the intent wasn’t understood), and the two of them had to flee. Everything Lennie touches goes bad. He wants so very much to have a pet, but he is too rough and ends up killing them due to his great strength. In this respect, he is like any of our small children who have tried to keep, say, insects, worms, or snails as “pets” and has handled them to death. This is Lennie - but with the strength to kill anything from a human on down.


And so, we know that George’s grand plan to save enough money to buy a little ranch, and work for his own profit rather than that of his boss, will be thwarted by Lennie in the end. Lennie, who wants nothing so much as to raise rabbits and live in peace. The best laid schemes of mice and men…


Steinbeck, for good measure, starts the book with a mouse and a man. Lennie, and a mouse he has caught, and accidentally killed, but still keeps in his pocket to pet, until George makes him discard it. Both, perhaps, alike in their simple schemes, but the victims of a fate that they cannot escape.


Other common Steinbeck themes appear in this book: the hatred of oppression by those in power, the affection for the “common man,” and the palpable frustration at the way people manage to screw up. The good-hearted yet feckless man is ever-present in Steinbeck, and his ability to make the reader feel sympathy even while appalled at the ludicrously bad decision-making is unparalleled. Just like the landscapes, Steinbeck’s characters feel real. You can smell and taste, hear and see and feel how they are. And Steinbeck does it in so few words too. Within a couple of paragraphs, I could smell the sharpness of the chaparral and the river-bottom trees - these are things I have lived. But I could also feel George and Lennie within a few minutes of meeting them. The relationship, in all its tension and connectedness was there from the first few words.


It is this writing that makes Steinbeck’s catastrophic endings so powerful. The drama that unfolds involves “real” people, more real even than those strangers we see as we pass in our real lives. We want so badly for Lennie to get his rabbits, to finally do something right. We feel George’s pain as he works so very hard to coach Lennie to do what he does best - work hard - and not do things which will cause inadvertent harm to others. And at the very end, when only Slim can understand what George had to do and why, the two of them walk off together, leaving Carlson - who will never understand the need for connection - saying the final, devastating line, “Now what the hell ya suppose is eatin’ them two guys?”


I didn’t entirely “get” Steinbeck when I was in high school - some things are wasted on the young, who haven’t entirely grasped the beauty of tragedy. But I keep returning to him these days, because the writing is so exceptional, and because his themes and perception of humanity on the fringes have come to mean more to me as I have matured. This most Californian of authors also grasps the essence of the Golden State, the fertility of its fields cultivated by the powerless, the endless dreams of a better life, of the gold at the end of the rainbow, but also the difference that a dream and human connection can make. Of Mice and Men is one of his darker books, with little to suggest optimism. Others celebrate the decency and generosity of humankind, or the power of dreams. Thus, the ghost of Tom Joad (to borrow from Springsteen) can live on to inspire Cesar Chavez, and Doc’s goodness can inspire love and remind us of the reality of friendship and connection even when the results are farcical.
Posted by Diary of an Autodidact at 10:18 PM